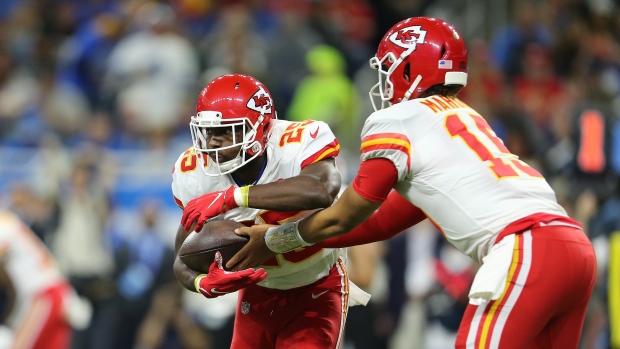 KANSAS CITY, Mo. — Patrick Mahomes takes the snap from Chiefs centre Austin Reiter, pulls away from the line of scrimmage and then, in a little more than a split-second, must identify the best way to make the chosen play work.

Are the second-level defenders breaking toward the line of scrimmage, forcing him to keep the ball and look downfield? Or are they dropping into coverage, in which case the MVP quarterback will jam the ball in the gut of running back LeSean McCoy or Damien Williams and keep things on the ground.

The Chiefs' use of that very run-pass option is a big reason why their offence has been so successful the past season-plus. It has largely kept defences uncertain where the ball is going, opening up the field for the Kansas City fleet of fast, athletic wide receivers.

Only the past two weeks, the RPO has been more like R-P-Oh no!

After rolling through their first four games, and with Mahomes on another incredible statistical pace, one of the Chiefs' signature offensive plays has lost its effectiveness. The Colts held the Chiefs in check in a 19-13 victory two weeks ago, and the Texans stopped them in the second half of a 31-24 win Sunday.

"I mean, obviously, we have to be better," Chiefs offensive co-ordinator Eric Bieniemy said. "There are a number of things that go into it, but everyone has to be on the same page."

Indeed, it's not just one issue that has conspired against their RPO game. Injuries have forced the Chiefs to use backups on the entire left side of the offensive line, Mahomes has been hobbled just about the entire season by a sore ankle, and injuries at wide receiver and running back have hardly helped.

Then there is what the defences are doing.

The Colts may have published the blueprint for stopping the Chiefs by using an aggressive form of man-to-man defence, jamming receivers at the line of scrimmage and harassing them downfield. Teams will often run the ball when they see a zone defence during an RPO play, but they tend to pass when teams are man-to-man, because there are so many bodies at the line of scrimmage that it's a challenge to decipher who is in run support.

With the Colts running man-to-man defences on three out of every four plays, the Chiefs largely abandoned the run entirely, and Mahomes and the passing game was unable to pick up the slack.

Kansas City ran the ball 23 times with its running backs Week 1 against Jacksonville. It was 21 against Oakland, 20 against Baltimore and 19 against Detroit. But that total dropped to nine against the Colts and was still nine last week against the Texans, even though LeSean McCoy was having a productive afternoon.

He carried eight times for 44 yards, most of that coming in the first half.

"I guess I've become a sellout, haven't I? I might be the biggest offender," said Bieniemy, who played running back in college and the NFL. "Yeah, we need to run the ball, but we have our RPOs and we give our quarterback the opportunity to make the best read for us. You don't want to second-guess what he's doing. But at the end of the day, when we're calling runs we have to make sure we're executing."

It does raise the question, though: Are the Chiefs still confident in Mahomes making the best read?

"Oh yeah, very confident. We put all our faith in Pat," Bieniemy said.

After every game, the Chiefs break down the film and see whether Mahomes made the right decision to run or pass. And the quarterback said Monday that with few exceptions, he made the right reads against Houston.

"You have to trust in what we're doing," Mahomes said. "I feel like there's plays here and there every single game that changed the outcome. That's how hard it is in the NFL. Any team can win any week, so it's the little plays that make a difference."

Or the little decisions, such as choosing whether to run or pass.