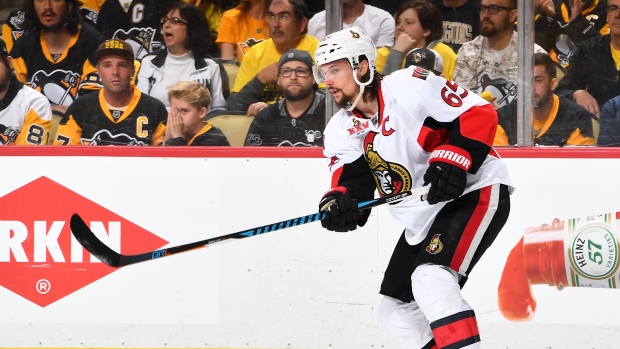 Ottawa Senators defenceman Erik Karlsson said this week his surgically repaired ankle is back to full strength, and perhaps better, a year after he had a section of his bone removed in surgery.

"I think it's better now than it was before because you work on it so much," he told The Athletic at the RBC Canadian Open Championship Pro-Am in Oakville, Ont., this week. "I'm very optimistic moving forward from here. It shouldn't be an issue for me whatsoever, so that's nice…

Karlsson missed only five games last season after having the surgery, but was not at '100 per cent' as he recovered. He finished the year with nine goals and 62 points in 71 games, his lowest point total since an injury-plagued 2012-13 season.

The Senators, who reached Game 7 of the Eastern Conference Final in 2017, finished second last in the NHL this past season, though Karlsson said one positive came out of it.

"As bad as it is to miss the playoffs, I think for me it was good timing in a way because I got time to work on [my ankle]," Karlsson said. "I worked with the doctor who did the surgery a little bit. I got him to help me out, and the trainer that I have is really good.

"I'm seeing another ankle specialist in Ottawa a lot, too. Mostly it's just getting strength back and getting used to the feeling, which takes a bit of time now and that time is past. I've got my new normal again and it feels great."

Karlsson, who reportedly turned down an eight-year contract extension with the Senators earlier this month, remains at No. 1 on the TSN Hockey Trade Bait list. Chris Stevenson of The Athletic writes the defenceman "made it clear" he did not want to talk about contract negotiations or a potential trade on Wednesday.