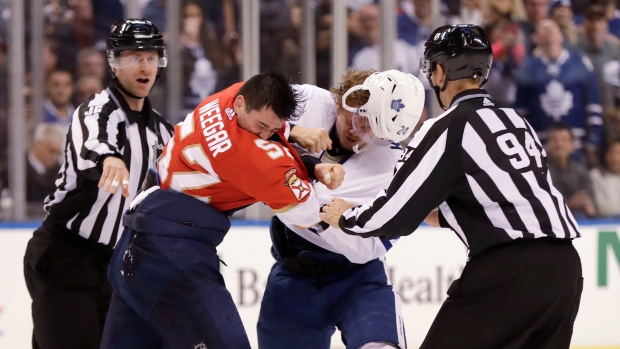 The Maple Leafs and Canucks skated at Scotiabank Arena on Saturday.

After fighting only once in​ the first 193 games of his NHL career, Kasperi Kapanen has picked up a pair of majors in the last four games. The right winger also has a roughing minor mixed in.

What's gotten into him?

"We had that bad stretch where we played Pittsburgh and we played Buffalo and guys were getting fed up with the way we were playing and that was kind of the turning point for me, I guess," Kapanen explained. "It's been a step in the right direction. I don't think I've been playing bad this year, but (now) I've been playing with a bit more grit and more emotion and it's been working out well for me so just got to keep at it."

Kapanen's physical play has also sparked his offensive game as he's picked up two goals and two assists in the last four games. He only had one goal and eight assists in the previous 18 games.

John Tavares notices that Kapanen, known for his blazing speed, is using his six-foot-one frame more effectively all over the ice.

"Just getting in on the forecheck or using his body to protect the puck and create time and space for himself, he's really seemed to elevate in different areas," the Leafs captain said.

"There's just a great edge to his game," said veteran forward Jason Spezza. "He's a guy that brings a lot of intensity to us. He's somebody that has really raised his game up here ... He's a competitive guy and I think this time of year suits him."

It also seems like Kapanen, at age 23, has a better understanding of how to be effective at this level.

"Sometimes, as a young guy, you get caught up in your numbers and how things look," said Spezza, "but the reality is he plays on the third and fourth lines most nights and we need different things out of him and I think he's realizing that and I think that's why he's come into his own."

Kapanen, who scored 20 goals last season and is up to 13 this year, says he can draw inspiration from the way his father Sami Kapanen crafted a role in the NHL with a workmanlike attitude.

"I'm never going to be that star forward on a team that's going to score a lot of goals and points," Kapanen acknowledged, "but for sure, (I can bring) a lot of energy game in and game out and be on the forecheck and aggravate the other team and I think that's an important piece."

Kapanen buckled McCann, he is having a hell of a game. pic.twitter.com/vuzcnzXgah

Spezza points out that Kapanen has held his own despite fighting a couple of lefties in Pittsburgh's Jared McCann and Florida's MacKenzie Weegar​. The feisty Finn insists he doesn't do much prep work when it comes to hand-to-hand combat.

"I'm not going to sit here and talk to you guys about how to fight," Kapanen said. "It's not my expertise, but it's just in human nature to try to do everything you can to not get hit and hit the other guy."

A simple approach, but fighting isn't easy or safe and teammates are taking notice.

"When you see a guy giving effort like that it makes everybody else drag along and gets more out of everyone," Spezza said.

Canucks defenceman Quinn Hughes spent a good chunk of his childhood in Toronto, because his dad worked for the Maple Leafs organization. Jim Hughes served as an assistant coach with the Marlies (2006-09) and then as the director of player development with the Leafs (2009-15).

What is Quinn's favourite memory of growing up around Scotiabank Arena?

"When they made the playoffs in 2013 and I was there for a couple of the playoff games," the 20-year-old recalled. "The atmosphere was insane."

Hughes caught up with some family friends over dinner tonight. He also had a quick chat with former Leaf Wendel Clark after the morning skate. Clark's son, Kody, is a close friend of his.

First time on the ice in Toronto for Quinn & Petey. 💥💥 pic.twitter.com/xsvJgTLYTC

Hughes also has a special connection to one current Leaf as William Nylander actually lived with his family after being drafted.

"I remember he was a really good guy," Hughes said, "and he would have long days at the rink and then we'd want to play mini-sticks or play ping-pong and he'd be down to do anything. So, for me, it was a really good teaching moment. I always thought if I was lucky enough to be in the same spot as him or same situation as him that I would treat kids the same way. He was awesome."

How competitive was Nylander when it came to playing table tennis against Quinn and younger brothers Jack and Luke Hughes?

"He didn't let us win," Hughes said, "but he wasn't that competitive, because he was so much better than us. Like, he's probably the best ping-pong player I've ever seen play live."

Already up to 51 points, Hughes shows no signs of slowing down in his rookie NHL season.

"This guy can skate all day," raved Canucks coach Travis Green. "He could probably play three games in one day. This part of year can be a grind sometimes, because you're tired and your body gets worn down and a lot of that is: are you a natural skater? Because from the outside looking in you don't understand sometimes how hard guys have to work to skate now, how they sprint for 30 seconds during a shift and that can be exhausting. The guys that are the natural skaters really benefit this time of year."

"I don't want to take my foot off the pedal here," Hughes said. "We got 19 games left and I want to make this my best stretch."

After allowing three goals and looking shaky in the first period on Thursday in Florida, Frederik Andersen shut the door the rest of the way in a 5-3 Leafs win. Tonight, he'll make his seventh straight start.

"We're starting to get some rhythm with him," said coach Sheldon Keefe. "The image that stands out for me as it relates to Fred is just one of Florida’s most dangerous shooters (Mike Hoffman) having the game on his stick, able to tie it late with the goalie out, a clear lane and just he and Fred and (Fred) stood his ground and made a big save for us with the game on the line so that was a really good, healthy sign for me."

Thatcher Demko also allowed a soft goal on Thursday, but unlike the Leafs the Canucks couldn't recover falling 5-2 in Ottawa. With Jacob Markstrom out, the 24-year-old American will get the call again tonight facing Toronto for the first time in his career.

"I'm not worried about Thatcher at all," said Green. "He's a strong kid mentally, he's going to be fine and I expect a good game out of him tonight."

After news of the Jake Muzzin injury broke on Wednesday, Leafs general manager Kyle Dubas tweeted out a link to a video of late British writer Alan Watts telling the old parable about a Chinese farmer, who is unfazed by the fortune or misfortune he encounters in life. For Keefe, who worked with Dubas in the AHL (Marlies) and OHL (Sault Ste. Marie Greyhounds), this was nothing new.

"I've seen that video many times, all the way from the days in the Soo," Keefe said with a smile, "that's a common one that's at the top of the list for Kyle any time any sort of adversity or anything comes up, just to keep things in perspective and keep us moving. Naturally as coaches, players, fans, media, whatever it is, you kind of latch onto the negativity or the excuses or whatever it is rather than staying focused in the moment and just keep pushing on, which is what we need to do. Provides some nice perspective for us."

Tavares said Dubas will often text or email interesting stories to him and other players, but the Chinese farmer story hasn't been one of them.

"Big picture or little picture he does such a good job of communicating with the group and guys individually to help us get better and maximize what we have here and reach our potential," Tavares said.

Sidelined with an ankle injury, defenceman Cody Ceci took part in the morning skate, his first group session since getting hurt on Feb. 5 in New York. Keefe said there's still no timeline for the defenceman's return.

Ceci and Toronto's other injured players – Muzzin (hand), Morgan Rielly (foot) and Ilya Mikheyev (wrist) – will travel with the team to California tomorrow. Rielly, Ceci and Mikheyev are expected to take part in practice during the trip, per Keefe.

After dressing seven defencemen in Florida, Keefe will return to the usual alignment of six tonight. That will allow rookie Timothy Liljegren to catch his breath after posting a minus-five rating in limited minutes over the last three games.

Denis Malgin draws back in, but will start on the fourth line after getting a look with Nylander and Tavares early in his Toronto tenure. Alex Kerfoot will move back to the wing on the second line.

"Just felt that we needed to get a little more consistency with that line," Keefe explained. "I put that line under some real duress with having 11 forwards and moving things around and I don't know how many line combinations I had the other night."