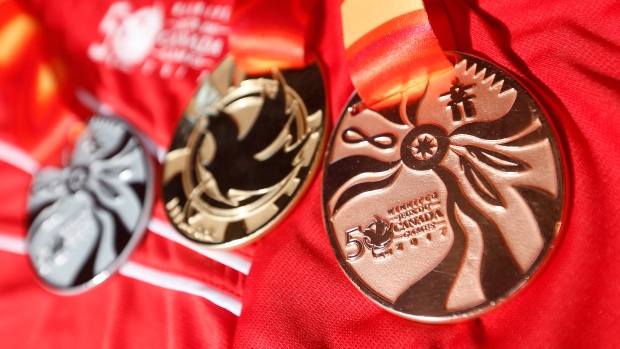 This week, Fiona Vincent will experience the same emotions as she cheers on her daughter when she competes in kayak at the Canada Games.

But it's an even bigger family affair that spans four provinces.

The five-member family hails from Saskatchewan, but Lexy is part of Team Ontario as she lives in Ottawa and attends Carleton University. Her brother, Fearghus, is working in Whitehorse for the summer and is a kayak/canoe assistant coach for Team Yukon, while the oldest brother, Kenzie, lives in Winnipeg and is a co-ordinator for the athletes village.

"I think it's kind of your epitome of what sport has to offer to people," Fiona said in a phone interview from Regina before she arrived in Winnipeg Sunday and had a picnic with her children.

She and husband Mike — who didn't make the trip because his mother died last Friday — always encouraged their offspring to do outdoor activities, especially canoeing and kayaking from a young age. Their sons have also competed and now Kenzie does marathon races like his parents.

The couple won the competitive class of the Kingston to Ottawa 200-K20 race last month in a Rideau Canal record time of 21 hours eight minutes 39 seconds. The old record was 23:07:34. The non-stop, 200-kilometre event included 22 portages and a prize of $500.

One of their pit crew was Lexy, who helped provide food, water and moral support.

"I was in awe at being able to watch my parents go through that as I got the see the whole race, all the effort that was needed and all the spots where they got so tired that any other person would have quit, but instead where they kept going," Lexy, 20, said.

"Being there was an incredible experience for me and I'm so thankful to have them as my parents."

Her grandfather, 75-year-old Bob Vincent, also did the race, but in the adventure class that allows a crew to help with portaging.

"I'm hoping to do really well," said the member of the Rideau Canoe Club, who won two gold and three silver in single and team events at last year's Canadian championships.

These are her second summer Games after also competing in 2013 and winning bronze in the K-1 1,000 against athletes up to 21 years old. Lexy also participated in the 2015 winter Canada Games as a cross-country skier, but no longer competes in the sport.

Her goal is to make Canada's under-23 world kayak team and then, ultimately, compete at an Olympic Games.

Mike used to compete in the sport nationally, while Fiona, 53, had been a national-level swimmer.

The couple — he's a physical therapist and she's a health and wellness programmer for the RCMP in Regina — volunteered when the summer Canada Games was held in Regina in 2005. Lexy recalls helping out with the medal ceremonies.

Even though some of Fearghus's young team members will be competing against Lexy, everyone plans to cheer for each other.

"You know what they say, family comes first. But I think it's also important as a coach to be cheering for the other athletes and it's important that the kids see that. ... It's about doing your best, it's not about necessarily beating everybody else."