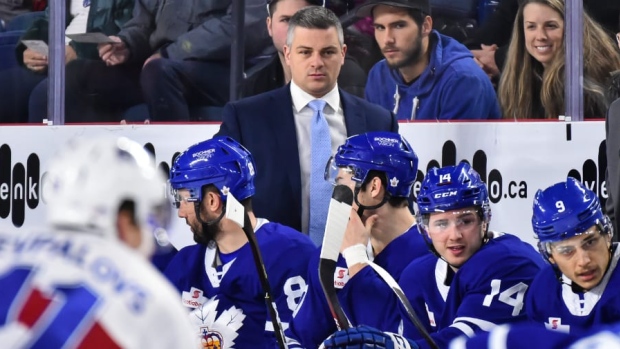 TORONTO — Even before an assistant coaching position became available with the Maple Leafs last week, Sheldon Keefe didn’t want the job. He didn’t even want to consider it.

The Toronto Marlies’ head coach had decided on his future months before, signing a two-year extension announced Tuesday to remain the Marlies’ bench boss.

Keefe said forgoing any promotion to the next level – in Toronto or elsewhere – was the right move for his development and growing family, but it also casts the 38-year-old as the Leafs’ head-coach-in-waiting, a rising star with potential to be groomed as Mike Babcock’s eventual replacement.

“I don’t know what the future holds for me,” Keefe said on Tuesday. “I do know I’m grateful for the opportunity to have another two years added to my contract here. I see myself as a head coach for the time being. If down the line I feel that I need to be an assistant to gain some experience, I’ll entertain that.”​

It was then-Marlies general manager Kyle Dubas who brought Keefe to Toronto in 2015, continuing a partnership that began in 2012 when Dubas was GM of the Ontario Hockey League’s Sault Ste. Marie Greyhounds and hired Keefe to coach the team from 2012-15.

In both instances, Keefe has delivered for Dubas. He was named OHL and CHL Coach of the Year in 2014-15 for leading the Greyhounds to a franchise-best 54-win season, and took the Marlies to their first-ever Calder Cup championship last spring.

This season was perhaps an even better coaching job by Keefe, overcoming the loss of key players like Andreas Johnsson and Garret Sparks to the NHL.

The Marlies didn’t clinch a playoff spot until the season’s final week, but the team reeled off seven straight postseason wins to reach the Eastern Conference final before eventually falling in a Game 6 double-overtime loss to the Charlotte Checkers.

Since Keefe hoisted the Calder Trophy over his head a year ago, Dubas has settled into a new role as general manager of the Leafs, while Toronto’s assistant GM, Laurence Gilman, has taken over responsibilities with the Marlies.

But the close relationship between Dubas and Keefe remains strong as ever and the organization has done everything possible to keep Keefe from moving on.

“I think he’s one of the best up-and-coming coaches in the American Hockey League,” said Gilman. “I think he’s a great hockey mind. Good people get good opportunities in time. It’s the best thing for the development of our young players [to have Keefe here] and move this organization forward. I’m sure there’s going to be a lot of opportunity in his future.”

According to Keefe, standing pat didn’t require much convincing. A native of Brampton, Ont., Keefe’s extended family still lives in the Greater Toronto Area, providing a support system for his wife and children during the long hockey season.

And then there are his own aspirations, ones that he may not articulate in full but admits will be better served calling the shots for an AHL team than working below someone else in the NHL.

“I know there are areas that I want to continue to grow in as a head coach and I believe this is the best fit for me to do that and I’ll continue to be committed,” Keefe said. “It’s not just the on-ice stuff, it’s the off-ice stuff and how you relate to players, how you communicate to players and how you work with your staff and there’s so many things there I want to continue to grow. I think I have a great opportunity here to do that.”

Most of the Marlies’ roster has been coached by Keefe for multiple years and players practically gush about the impact he’s had on them, whether through empowering each guy to improve upon and play his own game, or in the way he instills confidence by trusting his most important prospects with increased ice time in key moments.

Arguably no one has benefited more from Keefe's strategies in that area than winger Jeremy Bracco. The 22-year-old was a healthy scratch during much of last season's Calder Cup run, but Keefe pulled him aside during the Marlies' on-ice celebration post-win and told him the Marlies would be his team the following year. Keefe followed through by giving Bracco big minutes on the team's top line, and Bracco responded with 79 points in 75 games to finish second in the league scoring race.

“Keefer stayed true to his word. Credit to him, because it’s hard,” Bracco said. “You want to play for a coach that trusts you and you trust the coach. He stuck to his word and ever since he gave me a chance.”

Babcock drew ample criticism from media and fans alike for being too stubborn in some of his personnel decisions throughout Toronto’s Game 7 loss to Boston in their first-round series last month, refusing to lean on stars like Auston Matthews or curtail minutes among struggling veterans like Patrick Marleau.

Still, Dubas threw his support behind Babcock earlier this month, telling TSN Hockey Insider Bob McKenzie that despite Toronto's three consecutive first-round playoff exits, Babcock will continue on into the fifth season of his eight-year deal.

If at some point Keefe were tapped to step in, his current players say his greatest strength will be bringing an open mind.

“He’s always looking to improve. He’s always willing to adapt to whatever the game is evolving to,” said Marlies forward Chris Mueller. “…You have to be able to evolve, you have to be able to realize what works and doesn’t work and make changes. Sometimes people will get stuck in their ways and you’ll see their team kind of fizzle out. With Sheldon, his teams are just getting stronger…his players want to play for him and want to follow him because they believe in his system.”

For the next couple years at least, Keefe will continue to guide the Marlies and bide his time until there’s an offer he can’t refuse. Keefe won’t speculate about what that opening might look like, but there’s no more comfortable place for him to wait things out.

“All I know is my job every day is to get better, improve myself, be as good a coach as I can, and be prepared for any opportunity that might come up, whenever that might be and wherever that might be,” Keefe said. “I’ve always looked at this as the best job outside of the NHL. The most important thing for me is that I feel I’m growing every day and it’s [because of] the people and the players that I have around me.”