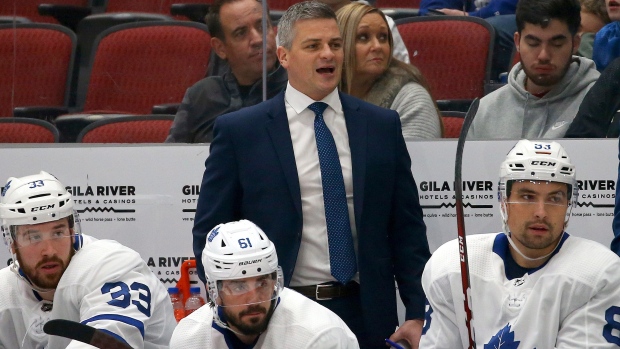 TSN Toronto reporter Mark Masters checks in daily with news and notes on the Maple Leafs. The Leafs and Buffalo Sabres practised at KeyBank Center on Thursday ahead of their Friday afternoon game.

The Leafs have looked like a completely different team with Sheldon Keefe behind the bench, outscoring opponents 14-4 en route to three straight wins. Every move the new coach has made seems to be working.

"I'm trying not to get too caught up in my role in this," the 39-year-old said. "I think a lot of things have worked out in my favour, just coming in as a new voice has given the players, you know, some of them have talked about a new lease on life and they've been feeling good. We have really good players and when they're feeling good and they're confident we feel like good things can happen."

And while Keefe's approach represents a breath of fresh air for some players, there's no doubt the firing of Mike Babcock also served as a wake-up call.

"We really just took it upon ourselves with this new opportunity," said defenceman Travis Dermott, who played for Keefe in the AHL. "It definitely isn't all on Keefer. It's not like Keefer came in and planted all these smiles on everyone's faces and said, 'Go win games,' and we started winning. I think the boys took it upon themselves."

For a lot of the young players this is their first experience with an in-season firing so the leadership group did its part to keep everyone focused.

"It doesn't change, because of a coaching change," said defenceman Jake Muzzin, "so I tried to emphasize that with the guys that we still have to go out there and perform and work. We brought maybe a little more emotion and determination in our game the last three games and it helped."

Muzzin was especially happy with how the team stayed locked in despite the lopsided scoreline in Detroit.

"Even late in the third period, we're back checking and stripping guys," Muzzin said. "The game is pretty much out of hand at this point and we still have guys not letting them in the zone and not letting them get through the neutral zone, which is huge."

Keefe is wary of overtaxing the group during a busy part of the schedule. Toronto will play its sixth straight away from Scotiabank Arena on Friday and there have been trips to three different time zones mixed in. So, new tactics are being introduced slowly. Thursday was, after all, only Keefe's fourth full practice with the team.

"We've tried to not give them too much, as a staff, rather just give them some things we think are really important," Keefe explained. "Of course, the offensive piece we think is really important to get this team really moving and they've responded really well."

Indeed, the possession focused game plan has resonated with the talent-rich roster.

​"He really pushes home the skills part and relying on each other's skill and going out there and not throwing pucks away," Dermott said, "and if we have a chance to bring it back and build it up and use our skill and hit the superstars that we have with speed then that's probably a pretty good play so I think that's the way we're thinking now."

Auston Matthews believes the approach is also helping the team be better defensively.

"When we just hang onto the puck we have it a lot and then once they finally get it they're tired," the centre observed, "and I think that helps out especially playing in the D-zone."

The Leafs have had more scoring changes and high-danger opportunities in each game since the coaching change while outscoring opponents 10-3 in five-on-five action, per the NaturalStatTrick website. And the hope is the Leafs will be able to garner even more possession as they get used to Keefe's system.

"We've put an emphasis on activating our weak-side D more and the weak side of the ice," Muzzin explained. "A lot of time it’s a lot more open than where the puck is originally. We're still getting used to it and we still have to talk more. I think the weak side of the ice, the guy who's net-front D or winger or whoever it may be can talk more and allow the guy with the puck, who's under stress, to know that he’s open and available so we're working on stuff like that."

William Nylander may be the biggest beneficiary from the change to Toronto's system of play.

While Nylander sometimes takes heat for his defensive play and was often prodded by Babcock to raise his compete level, he's usually been dynamite with the puck on his stick.

"We're playing with the puck, which is fun," Nylander said after potting a goal and adding an assist against the Red Wings. "We're not maybe trying to force pucks at the net, maybe turning up, delaying, finding the late guy, moving it, that's one of the keys. Also, we're winning pucks back after we get shots to the net.”

Normally subdued and tightlipped, Nylander was glowing after the latest win. It's hard to believe that last year at this time his future with the franchise was hanging in the balance as the Swede waited out a contract dispute while training in Europe.

"It was funny," a smiling Nylander said. "I was looking through my phone, a picture came up (from) a year ago and, yeah, not here so pretty crazy, but it's nice to be here now and taking steps in the right direction."

Where was he in the picture?

"It was when I was in Switzerland so I was just laughing at the situation. It was just funny."

Did he ever think he'd be laughing about what he went through?

"I didn't think so, but thank God it got done."

Nylander has nine goals and 12 assists already this season putting him just six points back of last year's total of 27, which was accomplished in 54 games.

The changes under Keefe have come fast and furious. The latest being that Michael Hutchinson will start on Friday afternoon with Frederik Andersen playing Saturday night in Toronto.

Babcock always played Andersen in the first game of a back-to-back set, believing his team should try to bank the two points when it was at full strength. Babcock also thought it was important for Andersen to play in front of a fresh group so he had the best chance to win and maintain a high confidence level, which would then filter out to the entire team.

The Leafs had success in the first game of the back-to-back sets under Babcock, but this season has seen the team struggle mightily when playing on consecutive days (0-5-1). So, was this change designed to try and help the back-up goalie get on the board?

"That certainly was part of the decision making," Keefe acknowledged. "But there's more things at play in this situation."

The Leafs rarely have afternoon games while matinees are more prevalent in the AHL so Hutchinson is accustomed to the 4 p.m. start time, Keefe noted. The earlier start and short drive home to Toronto should also allow Andersen to maintain a regular game-day routine ahead of the 7 p.m. start at Scotiabank Arena on Saturday.

Andersen's confidence is sky high after he posted his first shutout of the season on Wednesday night. He's now 6-3-1 with a .936 save percentage in November.

Hutchinson is 0-4-1 in the NHL this season with an ugly .879. He was sent down to the AHL late in Babcock's tenure before being recalled earlier this week following a 3-0-0 run with the Marlies (.942 save percentage).

"It was a challenge for him coming down," Keefe said. "With the way the season had gone and then so abruptly being told you're going to be going down, it's a tough realization. There were some challenging days there. We had to talk to him and also had to be patient with him and let him kind of work through some things emotionally."

TSN's Kristen Shilton has more on how Hutchinson regrouped here.

The Leafs swept all four games from the Sabres last season, outscoring Buffalo 18-10. The closest encounter came on Dec. 4, 2018, with Matthews playing the hero in overtime. The Arizona native finished the season series with four goals and three assists. Asked about having a leg up on his buddy Jack Eichel in their personal rivalry, Matthews wasn't interested in going down that road.

"I don't know how to answer that question, to be honest with you."

"It's always good," Eichel said. "We always bring out the best in each other."

The Sabres captain has that right as Eichel also posted four goals in the season series last year chipping in an assist as well.

The Leafs planned to gather for Thanksgiving dinner tonight to watch some football.

"Nothing's open," said Matthews. "So, nothing else to do, but hang out with your teammates. It will be good bonding time."