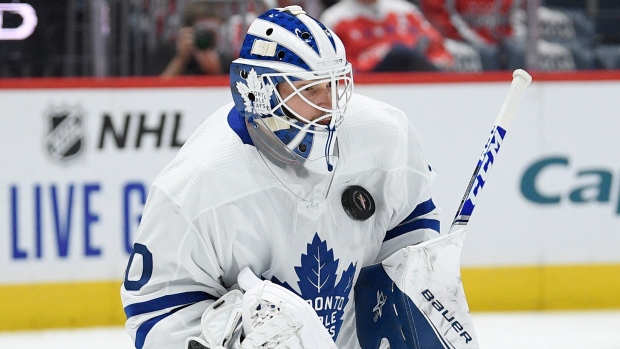 BUFFALO – Sheldon Keefe has dramatically changed the way the Maple Leafs do business over his first eight days as head coach, taking the team from sluggish losers of six straight to high-octane winners of their past three.

The first game of a back-to-back always went to starter Frederik Andersen under previous head coach Mike Babcock, but Keefe is taking a more pragmatic approach to his goalie selection.

“There are many things at play in this situation,” Keefe said after Toronto’s practice at KeyBank Center on Thursday. “Given that it's an earlier game [with a 4 p.m. start on Friday], and Hutch has played more in the American League and he’s accustomed to [earlier starts]. Also, we’re going to get back to Toronto at a good time, and it’s going to allow Freddie the chance at a normal game day on Saturday to get the morning skate and get ready to play. So, with all those things it just made sense for us.”

It’s not like Babcock’s goalie rotation was securing Toronto the results it needed. The Leafs are an abysmal 0-5-1 this season on the second night of back-to-backs, and Hutchison has been in the crease for five of those defeats (0-4-1, with a .879 save percentage and 4.44 goals-against average).

The Leafs placed Hutchinson on waivers and reassigned him to the AHL’s Toronto Marlies after a loss against the Chicago Blackhawks on Nov. 10. Rookie Kasimir Kaskisuo was recalled to take his spot and made his NHL debut in arguably Toronto’s worst game of the season, a 6-1 shellacking by the Pittsburgh Penguins on Nov. 17.

Babcock was fired four days later. The Leafs brought Hutchinson back to the NHL earlier this week, and Keefe, who previously coached Hutchinson with the Marlies, intends to see him succeed.

“It was a challenge for him coming down,” Keefe said. “With the way the season had gone and then so abruptly being told you're going to be going down, it's a tough realization. There were some challenging days there; we had to talk to him, and also had to be patient with him and let him kind of work through some things emotionally.”

The veteran goalie quickly rallied, going 3-0-0 with a 1.95 goals-against average and .942 save percentage in a week of AHL action.

“It’s just a credit to him,” said Keefe. “We were not surprised that he just settled in and, being the good pro that he is, just got to work and he’s played outstanding for the Marlies. The fact that he’s been busy and in the net is something that we think is important and we’re looking forward to giving him a chance to play tomorrow.”

Looking back on the situation, Hutchinson said he couldn’t have gotten through that rough period without the support of Toronto’s entire organization.

“Freddie sent me a text right away and a bunch of guys here reached out,” Hutchinson said. “[Leafs goalie coach] Steve Briere, we had a couple good talks. [Marlies general manager] Laurence Gilman and I had a good talk. [Marlies goalie coach] Jon Elkin was great. Had a good talk with [Leafs director of athlete well-being] Dr. Meg [Popovic]. It ends up being a real positive thing because it shows how much everyone cares for you as a person. Because some organizations just see you as an asset, but here they really view you as a person.”

That sentiment extends to the departed Babcock, towards whom Hutchinson holds no ill will despite how the first quarter of the season played out.

“My relationship with Babs was great,” Hutchinson said. “It was nothing but positive when he was here. He was great to me and my family, so I have nothing bad to say about him or anything. The situation with getting sent down, it is what it is. I’m not looking into the past and dwelling on anything there. I’m happy to be back up and looking forward to just moving forward.”

That’s the direction the Maple Leafs have been going since Hutchinson was last with the team, and he says now there is a “lightness” to the dressing room that wasn’t there before.

A victory on Friday would only keep the good vibes going, and extend the Leafs winning streak to a season-high four games.