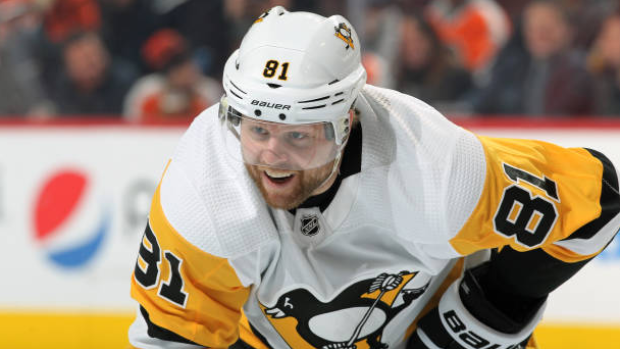 Kessel is a fascinating trade target. There are effectively three reasons why Kessel finds himself on the block this off-season. The first issue: Pittsburgh needs to clear some money to extend the window of contention during the Sidney Crosby/ Evgeni Malkin era. Right now, the Penguins have nearly $69 million committed on a base of just 14 rostered players and 24 standard player contracts, which is problematic. The second issue: reported friction with other Pittsburgh personnel, including head coach Mike Sullivan and even linemate Malkin. The third issue: despite the impressive scoring totals this year, there are surely concerns over forecasted performance through the duration of his contract.

It’s important to remember that we have been here before. Kessel was all but run out of town in Toronto in the summer of 2015 after shouldering a ton of the blame for the organization’s failures, which never seemed appropriate or accurate. But that was also Kessel in his prime. Kessel just finished up his age 31 season, and there are at least signs on the periphery that suggest wear and tear creeping into his game. Among other items:

1. A spike in assist rates (and more specifically, secondary assist rates) has driven his lofty scoring totals in the last two seasons. That has helped offset some of the goal scoring issues he has been having, which are notably down at 5-on-5.

2. Relatedly, most of Kessel’s impact – and this shouldn’t be discounted in any way – this year came by way of the power play. His 2.7 goals per-60 minutes this season were a 10-year high and his 8.1 points per 60 minutes was decimal points from being a career high.

3. Kessel’s shooting numbers are down. And that’s perhaps the most concerning component of all. Consider the below table, which shows Kessel’s shot volume looks like year-over-year. There is a noticeable downward trend here that should be of concern: 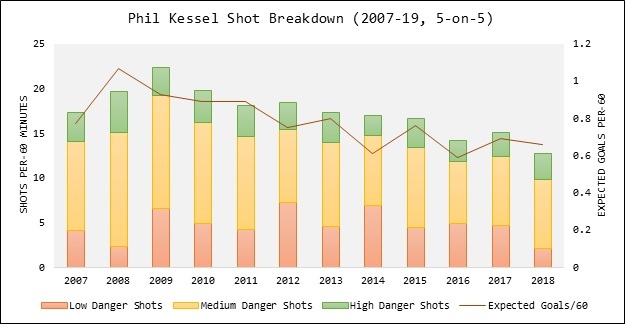 Kessel has never been regarded as a defensive stalwart, but that’s hardly mattered. Kessel’s offence has been so electric and productive for so long that he and his teams have routinely generated favourable shot and goal differentials with him on the ice. That’s the power of being such a high-end playmaker and sniper.

But if we are starting to see signs that Kessel isn’t as dangerous as he once was, his $6.8-million cap hit for the next three years becomes a harder pill to swallow, particularly for a team that’s going to be desperate for cap space. In the same breath, it’s hard to look at Kessel’s scoring rates for the year and think he’s anything close to done. He was productive for a good portion of the season and most teams would kill to have him inside of their top six.

One of the issues that I do think impacted Kessel quite a bit – perhaps more now at age 31 than ever before – was Pittsburgh’s top-heavy lineup. If you start looking at how Kessel performed with different teammates, you see that his production was strong at an individual and team level when paired with playmakers like Malkin and Carl Hagelin (and, to a lesser extent due to limited ice time together, Crosby). When Kessel was flexed into third-line duty or shouldered primary playmaking and goal-scoring responsibilities on weaker second lines, his performance tanked.

The below table shows Kessel’s common teammates over the 2018-19 season. With each player we see how Kessel generated shot and goal volume, and off to the side we can also see how the duo managed to drive goal differentials for their respective teams when paired together: 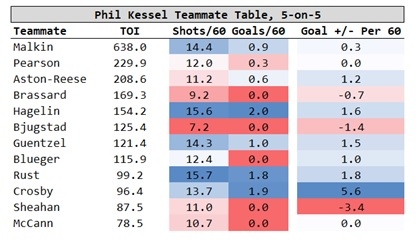 Dropping from a player like Malkin to the likes of Tanner Pearson, Zach Aston-Reese, and Derick Brassard is a massive change. Combined with his electric power-play scoring over the last couple of years, I think it is fair to conclude that we have hit the stage where Kessel can no longer drive a line – and certainly not a weaker line – on his own. (It goes without saying that Pittsburgh’s blueline is also a mess, which doesn’t help things here either.)

Should this deter possible trade suitors from inquiring on Kessel? That depends. There are teams around the league with heaps of playmaking talent down the middle of the lineup, but in desperate need of a shot creator and goal scorer on the wings. If those teams also have some cap space to play with, a player like Kessel can have tremendous value – the type of value that allows you to comfortably absorb his $6.8-million cap hit.

Kessel has exhibited a tremendous ability to generate dangerous offence his entire career, and still shows it in spots at the age of 31. The key now is finding ways to complement his skill set and mitigate his liabilities.

The team that does that might be able to acquire a very impactful forward at a discount this summer.