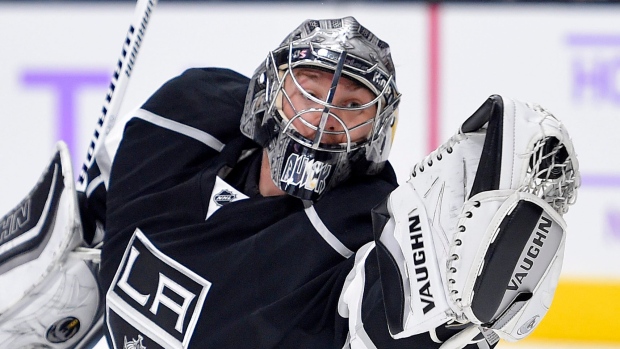 Jonathan Quick took part in practice on Tuesday and is closing in on a return from the groin injury which has limited him to just one period this season.

According to Jon Rosen of Fox Sports West, Quick is not yet occupying a net of his own in practice but remains on target to return in early-to-mid March. Rosen said Tuesday Quick could be looking at a return in the second week of March.

“We’re going to do it day-by-day in simulated games and see exactly where he’s at, and then I’ll say, ‘this is the game you’re playing,’ and that’s what we’ll do,” Kings head coach Darryl Sutter said earlier this week, per Rosen. “In terms of deadlines or any of that other stuff, that doesn’t involve him and I at all. That’s how we deal with that.”

Quick suffered a major groin injury in the first game of the season on Oct. 12 and has not played since.

Petr Budaj had shouldered the majority of the load in his absence, starting 50 of 58 games. Budaj owns a 27-19-3 with a 2.12 goals against average with a .917 save percentage and seven shutouts. Jeff Zatkoff has served as Budaj’s backup but owns just two wins in eight starts.

Zatkoff was placed on waivers Wednesday.

The Kings currently sit two points back of the Calgary Flames for the final wild-card spot in the Western Conference. Los Angeles has six games remaining before March 9 – the earliest realistic date for a Quick return – and four games before the trade deadline.

The Kings defeated the Colorado Avalanche 2-1 on Tuesday night.