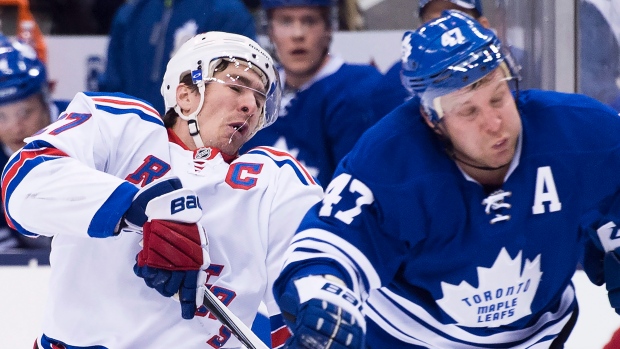 TORONTO - Rangers captain Ryan McDonagh was forced to exit Thursday's game in Toronto after he was elbowed in the head by Maple Leafs forward Leo Komarov.

Komarov was dealt a match penalty for the illegal check to the head and could face supplemental discipline from the league for the collision.

The Rangers said McDonagh was removed for "precautionary reasons."

McDonagh had just returned from a concussion on Wednesday night when the Rangers hosted the Chicago Blackhawks. He missed four games previously after he was sucker-punched by Flyers forward Wayne Simmonds.

Komarov caught an unsuspecting McDonagh with his left elbow with 1:02 left in the first period. He was immediately challenged to a fight by Rangers defenceman Kevin Klein, who threw his gloves down on the ice in fury.

Komarov has not been suspended previously.