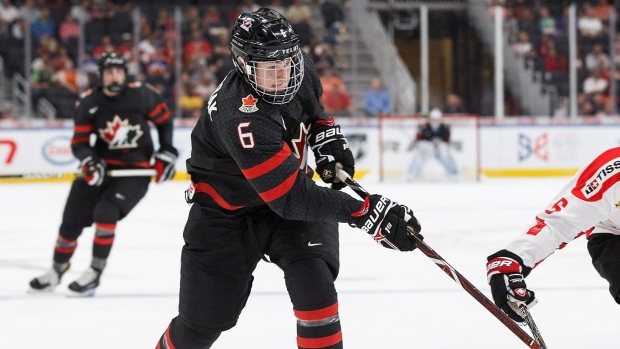 "During the second period he asked me to fight and I said, 'Maybe,' so I was kind of nervous going into the intermission," Korczak recalled of the Western Hockey League game on Nov. 24, 2017.

Neither rookie had fought before in the WHL and both were, apparently, eager to get their first fisticuffs out of the way.

"Third period came around and I was playing my right side and he dumped it into the left-hand corner and I just skated over and I hit him and he cross-checked me back and he dropped his gloves and I dropped mine and just blacked out from there," Korczak said.

There was no bad b​lood. It was just two teenagers burning off some nervous energy. In fact, when they got to the box Byram called over to check on Korczak's hand.

"I actually punched him in the tooth with my knuckles so it was pretty bloody and I had to get a tetanus shot," the Yorkton, Sask., native said. "That was sore for a little while after that."

The fight happened with 5:41 left in the third period and with Kelowna leading 3-2 so the timing worked well for Korczak who got the better of the altercation while taking the offensive-minded Byram out of action for five minutes.

"When I got back to the bench everyone was giving me taps and the coaches said, 'Good job,' so I was definitely proud of myself," Korczak said.

After the season, in the summer of 2018, Korczak and Byram joined forces at the Hlinka Gretzky Cup in Edmonton serving as an effective defence pairing as Canada won the gold medal.

"The first day we just kind of chuckled about it," Korczak said. "We fit pretty well together. We played pretty good together at that tournament, in my opinion. The way he plays is more offensive and whenever he goes up in the rush I can defend and whenever I get up there he can defend as well so it just kind of clicks. We just read off each other."

​Both players will be heading to Red Deer, Alta., on Monday to take part in Hockey Canada's World Junior selection camp. After winning gold in Ostrava, Czech Republic, last year, Byram is a lock to make the squad again while Korczak will be fighting to earn a job. Korczak spoke with TSN this week via Zoom and explained how he's preparing and where he's improved the most​ during the lengthy off-season.

It's going to be a long run with 51 days in a bubble if you make the team. Do you have any strategies to stay busy? Books? Netflix shows?

"We just found out yesterday that we're allowed to take our video game consoles so that will be nice to keep us busy in our off time. I'm not a big reader so taking that will be good."

Were you holding your breath on that decision? Were guys kind of worried about that?

"Maybe a couple guys. I don't know. But I'm definitely glad that I'm able to take it, because that's a lot of time in your hotel room alone. I'm a big Call of Duty player. I've played that with my cousin and brother for a while and we play the NHL game the odd time too."​

What can you bring to Team Canada? What role do you see for yourself at the World Juniors?

"A complete game. Just a guy who can shut down top lines and if offence is there and needed I can jump in and do that as well. I'd say I'm a 200-foot defenceman that can do everything on the ice."

Despite playing eight fewer games, your point total jumped from 33 to 49 last season. What did you do better offensively?

"Confidence was one thing. Getting drafted [in the second round by the Golden Knights in 2019] was a big part of that. Going down to Vegas and doing that training camp with all the NHL guys was something surreal, honestly, to see how they prepare and how they practise and do all that stuff. I brought that back to Kelowna and it helped me. I had a good start to the year and just ran with it from there."

Dream come true signing my first NHL contract with the @GoldenKnights can’t thank everyone enough for all the support! You’re next @Korzy19 pic.twitter.com/6CL7zFOiat

Have you been focused on improving anything in particular when it comes to your game this off-season?

"I really put in time to develop my shot. That was a big thing I wanted to improve ... First, I changed my stick. I was using the normal-height blade so it was a thin blade. I got a max-type blade, which is really good and helps your shot. Also, just doing different workouts for upper-body [strength] and more shooting reps. We were skating every day in early summer and I was just shooting pucks at the end of practices."

You've made Crash Conditioning in Calgary your off-season base the last three years. What do you like about it?

"There's elite [junior] guys and pro guys, too, so that's good to be out there with them. Some of the pro guys are Jordan Eberle, Austin Wagner, Kale Clague, [Cale] Makar was there last week, but I wasn't there, but guys like that are good to have to push me. It's definitely more intense than what I was used to when I first came. When my brother [Moose Jaw Warriors forward Ryder Korczak] and I first got there, they put our butts into gear. It was hard, for sure, but now we’re used to it so it's good."
What were you not used to when you first got there?

"When I was training back in Saskatchewan with my program we'd do pull-ups whereas here we do pull-ups with a 40-pound dumbbell in our knees so just stuff like that and getting stronger that way."

What was the sibling rivalry like with younger brother Ryder in the WHL this year?

"We played each other in Moose Jaw and that was a pretty cool moment for myself and him and my family. It was a close game. It went to overtime. He had a goal and two assists and I had two goals, including the OT winner, and he was on the ice so it was pretty cool."

You also drew a penalty on him?

What was the best part of growing up in Saskatchewan?

How it started: How it’s going: pic.twitter.com/07z7Y1AitL