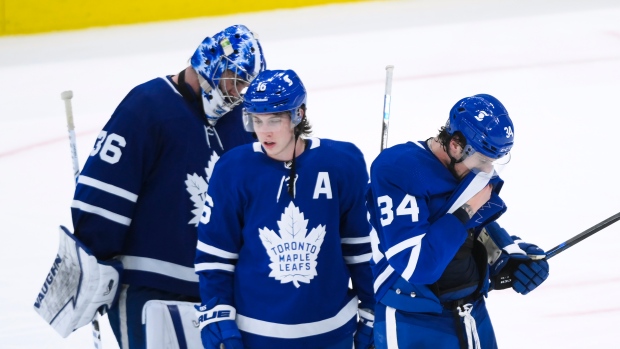 TORONTO — The Maple Leafs had their chance, and they blew it. Again.

Toronto had three opportunities to close out its first-round playoff series against Montreal and managed to squander them all. In Monday’s decisive Game 7, the Leafs couldn’t even score until their fate was already sealed, and the 3-1 loss put a final dagger through Toronto’s once-promising season.

The scenario was perfectly familiar to the Leafs. It marked the third time in four seasons that Toronto has been bounced from the first round in Game 7, not to mention their loss to Columbus in Game 5 of a playoff qualifying round last summer.

In this chapter of defeat, Toronto’s stars were all but invisible. Auston Matthews scored just once in seven games, Mitch Marner didn’t score at all and, with their season on the line, only William Nylander managed to light the lamp when Toronto was too far gone for it to matter.

“It's really hard to put it into words,” said coach Sheldon Keefe. “We’re obviously devastated and disappointed and expected better of ourselves. We believe we were capable of a lot more, not just tonight but through the whole series. Our guys wanted to win, they wanted to push past this and we didn’t get it done.”

Keefe said his players were “quite devastated” following the loss and he chose not to address them right away. Instead he’ll give them – and himself – more time to reflect on how Toronto ended up where it did – on the outside looking in after another first-round playoff disaster.

The Leafs had put themselves in an ideal position entering the postseason, winning the North Division and securing home ice advantage in the first round. Toronto lost Game 1 of the opening round to Montreal (and saw captain John Tavares exit the series entirely with a concussion and knee injury) but rallied to win the next three games and put the Canadiens on the ropes.

Toronto outscored Montreal 13-3 in that four-game stretch, but struggled to find offence in the series’ final three games. In both Games 5 and 6, the Leafs were down by multiple goals and came back to force overtime, only to lose twice in the extra frame.

In Game 7, Toronto was once again stymied by the Canadiens’ smothering defence and Carey Price’s stellar play. The Canadiens’ netminder had a .944 save percentage in Montreal’s last three victories, and the Leafs’ top scorers looked impotent in front of him. Through two periods on Monday, Matthews, Marner and Nylander had combined for a single shot on net and the Leafs didn’t generate one high-danger scoring chance (compared to three by Montreal).

Marner hasn’t scored a goal in his last 18 playoff games now, a revealing statistic that the 24-year-old had trouble explaining away.

“I had a lot of looks, a lot of nets that were empty that I just didn't put it into,” he said. “I put a lot of pressure on myself [to] be the best player every single night. I felt that I wasn't living up to my own standards and I just have to make sure that stops happening.”

Unfortunately for the Leafs, Marner couldn’t figure it out in time to help save their season.

After a goalless first period on Monday gave way to an energetic start to the second for Montreal, it was Brendan Gallagher breaking through early in the frame to spot Montreal a 1-0 lead.

The Leafs pushed back but couldn’t beat Price, and when Pierre Engvall was called for holding, Corey Perry capitalized with a power play goal to give the Canadiens a 2-0 advantage going into the third.

Tyler Toffoli added an empty-netter to seal the victory for Montreal. Nylander’s score came after that, ruining Price’s shutout bid but accomplishing little else.

An extremely emotional Jack Campbell, who posted a .934 save percentage in the series, couldn’t help but put the blame on himself for Toronto’s loss after Gallagher’s goal went in.

“It was the worst [goal against] of my career, and it happened in Game 7,” Campbell said, fighting back tears. “Just thinking of how hard the team battled and for it to end like that. It’s unacceptable. The team counts on me to be better and I know I can be a lot better.”

The same goes for Toronto’s entire team. Keefe refused to make allowances because of Tavares’ injury or the loss of Jake Muzzin in Game 6 to a lower-body injury that kept him out of Game 7. Nick Foligno also missed time in the series with a lower-body ailment and returned for Games 6 and 7 but was “far from 100 per cent” according to Keefe.

Still, the Leafs were built to withstand such problems, and they couldn’t. And there was no easy way for Keefe to put that into perspective amid the rubble of Toronto’s season.

“We were in a really good spot and didn’t close it out and we had enough pieces and depth to be able to do with those [injury] situation,” Keefe said. “So there's zero excuses. I think our guys played hard. I'm not going to question our team's will or commitment. We didn't get it done. We had our opportunities to close this thing out and clearly we failed to do so.”​​