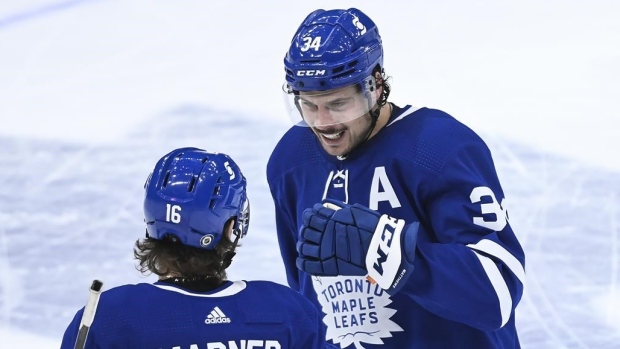 TORONTO — Hockey players tend to thrive on routine. The Maple Leafs are about to have theirs upended.

The Leafs are travelling to the United States this weekend to play teams they haven’t seen since before the COVID-19 pandemic started. Before that, they’re coming off a rare three-day break between games to face the San Jose Sharks at home on Friday, when puck drop is scheduled for one hour earlier than Toronto’s usual 7 p.m. starts.

It’s a bunch of small changes, but they require adjustment none the less.

“That [start time] is a little different, and personally once I’m down for my nap [the routine] is pretty set to the book,” said Travis Dermott following the Leafs’ team meeting on Friday. “So, I’ll have to get up from that an hour earlier and [get going]. It feels like we're getting into the season and it's nice to be in the mix of things now. These last few days gave us a good chance to sit down, watch video and have some good meetings.”

It’s been an early season rallying cry for the Leafs to “control what we can control.” They’ll get another test of that mantra this weekend.

One of Toronto’s strengths this year was supposed to be its goaltending tandem of Jack Campbell and Petr Mrazek. That is, until Mrazek pulled a groin in his first start last Thursday, forcing the Leafs to recall third-string netminder Michael Hutchinson from the American Hockey League’s Toronto Marlies.

Coach Sheldon Keefe said on Friday that Mrazek has resumed skating and is still “on track” with the minimum 14-day recovery the club announced when he was hurt. Mrazek will accompany the Leafs on their road trip to Pittsburgh, Raleigh and Chicago next week, but Keefe said he “isn’t close to playing” although progress has been good.

So, it’ll be Hutchinson getting the call against San Jose, keeping Campbell fresh to play the second half of Toronto’s back-to-back on Saturday in Pittsburgh.

Hutchinson last played an NHL game on April 4, in a 4-2 win over Calgary. Keefe said on Thursday that having a reliable third goalie like Hutchinson available is a true asset for the Leafs, but they must help him start the season strong.

Toronto should have every advantage over the Sharks, especially when it comes to rest. While the Leafs have been idle since their 2-1 overtime loss to New York on Monday, San Jose has played twice, including Thursday in Ottawa.

“Having a good start would be good [for Hutchinson], trying to play with the lead and give him some run support would be nice,” Keefe said. “And then how we defend, how we take care of the puck, all those things are important. [San Jose] is a team that's rolling, they're confident, they're feeling good. For the most part they've been in control of the games that they've been in.”

The Leafs have been struggling to score at 5-on-5 early on. Their five even-strength goals are tied for third-fewest in the NHL, and Toronto is converting at the fifth-lowest goals-for per game rate (2.00).

John Tavares is one of four skaters in the Leafs’ top six who has yet to score a goal. There’s been plenty of talk about good chances and opportunities around the net but failing to capitalize is starting to catch up with the team.

“We want to play our game and spend as much time as we can in the opponent's end,” Tavares said. “That's one of the things we've talked about this morning. [San Jose] doesn't do very much of that [playing in their own end], so being able to establish our game offensively and grinding them down and being a hard team to play against [is key], and when we have to check, we check hard and don't give them much time or space.”

One area the Leafs have excelled in though is faceoffs. Toronto paces the entire NHL at 62.9 per cent in the dot, and Tavares is even better than that average at 69.5 per cent.

Between Tavares, David Kampf (65.1 per cent) and the recently returned Auston Matthews (86.7 per cent), the Leafs are at least putting themselves in good position to start. Now it’s about finishing.

“I take a lot of pride to be good on both sides,” Tavares said of his faceoff strategy. “It's a great opportunity to not have to work to chase the puck and have to get it back. It's a great chance to start your shift or a power play with it and sets you up for success more often than not.”

Tavares couldn’t help but laugh while noting after Friday’s game, he’ll be going back to the United States for one of the first times this decade. The process of cross-border travel will be as unfamiliar to the Leafs as opponents they see on the other side. But it’s a step in the direction of normal – or close to it.