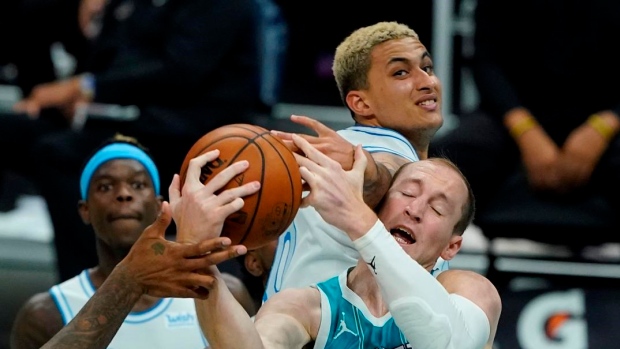 CHARLOTTE, N.C. — Kyle Kuzma scored 24 points, and the Los Angeles Lakers held on for a 101-93 win against a Charlotte Hornets team missing five of its top six scorers on Tuesday night.

Dennis Schroder added 19 points and Andre Drummond chipped in with 12 rebounds for the Lakers, who closed out a seven-game road trip with a 4-3 record to remain in fifth place in the Western Conference.

Devonte Graham led the Hornets with 19 points. Caleb Martin had 17 points and 10 rebounds.

The game was largely a battle of backups, with the Hornets missing four starters due to injury and the Lakers three.

Charlotte was missing more than 72% of its scoring with Terry Rozier and P.J. Washington joining LaMelo Ball, Gordon Hayward and Malik Monk on the bench. The Lakers, who are still without All-Stars LeBron James and Anthony Davis, were missing Markieff Morris due to a sprained left ankle.

The Lakers built a 10-point lead in the closing seconds of the third quarter behind a jumper by Schroder.

But Charlotte cut the lead to one with 1:54 remaining behind a coast-to-coast layup and a 3-pointer from Graham. The Hornets had a chance to take the lead on their next possession, but Graham turned the ball over and Alex Caruso made them pay at the other end with a big 3 with 43 seconds left.

Graham missed a spinning 3-point attempt and Caruso made two free throws to push the lead to six with 28.1 left.

Graham answered with a runner and the Cody Zeller appeared to come up with a steal in the backcourt before losing control of the ball. The Hornets were forced to foul and Kuzma slammed the door on Charlotte with four free throws down the stretch.

Lakers: James supported his teammates from the bench throughout the game and got quite animated following a high-flying one-handed dunk from Kuzma over Bismack Biyombo. ... Coach Frank Vogel picked up a technical foul in the second quarter when he argued a charge call against Drummond. ... Marc Gasol (left hamstring) didn't play despite being cleared before the game.

Hornets: Started their 15th different lineup. ... James Borrego picked up a technical foul in the third quarter. ... Had 18 turnovers resulting in 26 points for the Lakers.

Lakers: Return home to host the Celtics on Thursday night.

Hornets: Host the Cavaliers on the second night of a back-to-back Wednesday.