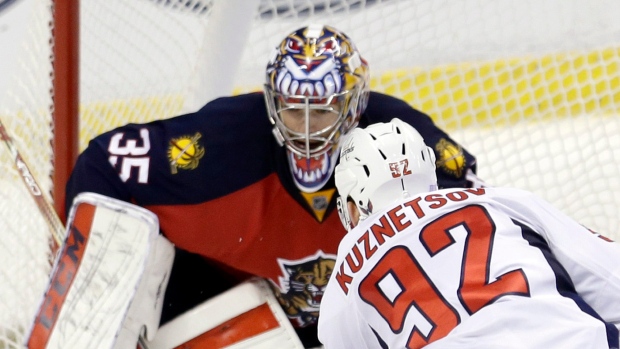 SUNRISE, Fla. - The Washington Capitals admittedly weren't their best on Saturday night, but Evgeny Kuznetsov and Alex Ovechkin made sure they left Florida with another back-to-back win.

Kuznetsov scored in overtime, Ovechkin had two assists and the Capitals beat the Florida Panthers 2-1 on Saturday night.

Kuznetsov skated the puck along the top of the zone, faked a pass to Ovechkin and then charged the net from the left side. He went untouched to below the left circle and beat Al Montoya stick side.

"I just tried to hold the puck. I like the shootout, too, but this is something new, and we accept the challenge," said Kuznetsov, who helped the Capitals improve to 4-0-0 in the second of games on consecutive nights.

"It could have gone either way," Montoya said of the overtime. "I like it better than the shootout, I guess, even though we were on the losing end of it."

The Capitals beat Columbus 2-1 on Friday night, while Florida lost 3-1 to Boston.

Jay Beagle, who scored Washington's first goal in the third period to tie it, said he and his teammates didn't put forth their best effort.

"We weren't our best, but we were in the game in the third. We knew if we could bring our game and go after them then the game wasn't out of reach. Luckily, (goalie Philipp Grubauer) stood on his head and we were able to get the win," Beagle said.

"Both teams had played, so there's no excuse. You just have to empty the tanks on the back-to-backs."

The Capitals have won two in a row and seven of their past eight.

Jussi Jokinen opened the scoring for Florida early in the second with assists from Dave Bolland and Alex Petrovic. Beagle tied it 2:23 into the third period.

Grubauer made 26 saves. Montoya had 25 for Florida.

The Capitals went to the power play after defenceman Erik Gudbranson held Ovechkin 42 seconds into the second period. As the power play was ending, defenceman Petrovic blocked a hard slap shot from the point, and it was gathered by Bolland, who lofted a short pass to Jokinen.

Jokinen chipped the puck on the second bounce and popped it over Grubauer for his third goal to give Florida a 1-0 lead at 2:47.

"Bolland made a great play," Jokinen said. "I swung, didn't hit the puck, but the second time I got it. That was a big goal."

Jokinen moved to the top line in place of injured Jaromir Jagr, and he nearly added another with 6:40 left in the period when he fired a loose puck in the slot, but the slap shot rang off the crossbar.

Montoya stood strong the remainder of the period, making a sprawling save on a Brooks Laich's put-back near the crease.

The Capitals tied it when Beagle tipped in a shot by Ovechkin that was deflected by a sliding Jokinen in the slot.

Florida coach Gerard Gallant challenged the tying goal, saying Williams interfered with Montoya while skating through the crease. The call on the ice was confirmed after a short review, giving Beagle his second goal.

Washington coach Barry Trotz said he put "a worker" on each line with the intent of getting shots from inside because nothing was working from long range.

"We weren't playing quick early. We were losing more than we were winning. . We switched up every line and away we went," the second-year Capitals coach said.

NOTES: The Capitals feasted on the Atlantic Division last season, going 16-4-4 and have earned a point in 18 straight games against the division (15-0-3). ... Washington scored four or more goals in five of their first nine games and rank fourth in goals per game (3.56). ... Florida scratched top scorer Jagr (lower body) for the second straight game. ... The Panthers placed F Aleksander Barkov (broken hand) on IR and recalled F Grimaldi from the AHL's Portland Pirates. ... Florida won an NHL record 20-round shootout the last time they hosted Washington on Dec. 16, 2014. The Panthers became the first team to tally six goals in a shootout.