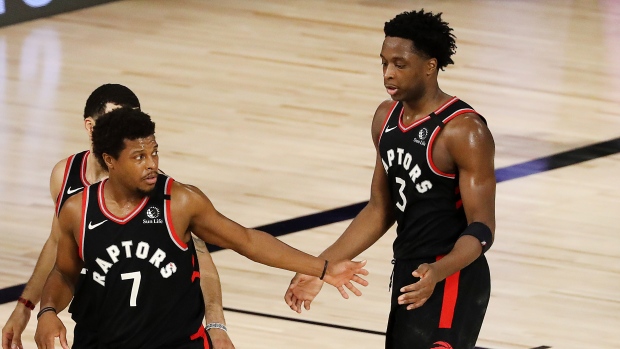 TORONTO – After playing more than 53 minutes of intense, high-stakes basketball and then fielding nearly 10 minutes of questions from reporters, Kyle Lowry was anxious to get back to the hotel, put his feet up and finally exhale. But first, he couldn’t leave without showing off his battle wounds. And what a battle it was.

“Want to see my wounds?,” he asked, holding up his cell phone to show the media in attendance and over the Zoom call a photo of the nasty-looking gash on his chin, which required three stitches to close up at halftime. “I’m showing my beauty scars off.”

It was a long night at the office for Lowry and his Toronto Raptors, who needed two thrilling overtime periods to fight off the Boston Celtics and keep their season alive. Nothing came easy, but that’s fine with Lowry. Nothing has ever come easy for the self-made all-star point guard.

These are the moments he relishes: back against the wall, game – and in this case, the campaign – in the balance, something to prove. A performance that doesn’t yield at least a few bumps and bruises isn’t worth bragging about. That’s Lowry, and once again, when his team needed him most, he was there and ready to lay it all on the line.

“I mean, we had to work,” said the 34-year-old, who scored 33 points in the Raptors’ 125-122 victory over Boston, tying their second-round series up at three wins apiece and forcing a deciding Game 7 on Friday. “Our job is to be out there and play as hard as possible.”

“We had to work hard for this win and for us, personally, that’s what we do: we play hard and we go out there and we play every possession like it’s our last and find ways to pull out victories.”

This was another all-time effort from Lowry. His night will be remembered for his play in the game’s most crucial moments, and rightly so.

Remarkably, he played 43 straight minutes to close the contest – his four and a half minutes of rest came early in the first half. He played the entire second overtime with five fouls, and still reached in to swipe the ball away from Jaylen Brown – a crucial play with under three minutes remaining and Toronto down by two points.

He hit three big three-pointers in the fourth quarter and had three key buckets in the overtimes, including a couple in the post, backing down bigger players.

In the end, he got help from the team’s supporting cast, and the Raptors couldn’t have pulled out the win without it.

Marc Gasol, who’s struggled all series and was so frustrated after missing his first three shots that he nearly tore off his jersey, finally turned a corner in the third quarter, where he scored all eight of his points. Serge Ibaka was in a walking boot Tuesday, questionable for Game 6 with a sprained ankle, but contributed 13 important points in 21 minutes off the bench.

OG Anunoby served as the centre in Nick Nurse’s small lineup over the final 18 minutes and did an incredible job playing and defending out of position. Fred VanVleet had a big second half. Even Pascal Siakam, who has lost almost all of his confidence offensively at this point, played lock-down defence in crunch time and finally got a shot to fall late in double OT.

Then there was Norman Powell.

With Nurse opting to close in the small lineup, Powell was out there in place of a traditional centre – Gasol or Ibaka. He’s had a rough series and was mostly ineffective in the first half.

But with two minutes to go in the first OT, he hit a long three to tie the game and calmly knocked down a couple free throws. Then, after evening the score again with an even longer three-ball in double OT, Powell converted a three-point play, putting the Raptors up for good with under a minute left.

Having played nearly an hour of basketball when Powell hit the dagger, what was going through Lowry’s mind?

“He saved us, he saved our season,” VanVleet said of Powell, who scored 15 of his 23 points in the overtimes – another postseason masterpiece for a player that’s had a bunch of them in his young career.

However, before Powell got going, before any of those guys could hit a shot, and at points in the first half where things seemed like they were on the verge of slipping away from the Raptors again, Lowry kept them in it.

After an uncharacteristically quiet Game 5 – he scored just 10 points in Toronto’s embarrassing blowout defeat – Lowry vowed to be more aggressive in Wednesday’s must-win Game 6. With the Raptors’ offence struggling, Lowry scored eight of the team’s 21 first-quarter points. Then, with Boston on a run and threatening to pull away, he added seven more in the second, which helped narrow the halftime deficit to a manageable four points.

Like he did in Game 3, before tossing the pass that set up Anunoby’s buzzer-beater, Lowry gave the Raptors life. He gave them a chance to go on and win.

After that game he downplayed his efforts, and the pass that led to the shot, in favour of praise for Anunoby. After this one, he credited Powell, VanVleet and the rest of his teammates. He’s happy to share the spotlight, perhaps too happy.

“I just keep trying to pump him with confidence,” VanVleet said. “He’s so unselfish, you know. Sometimes he can pass the ball and get out of the way, but we need him to [step up and score]. And he did that in a big way tonight.”

“I think his role’s just changed year to year. I know he deferred to DeMar [DeRozan] a lot and he deferred to Kawhi [Leonard] a lot, obviously. And, you know, last year’s run kind of cemented him a little bit more, where we needed him to make big plays. He always does it, but for him to be the primary guy down the stretch… it’s nice to just throw it to an All-Star sometimes and let him get a bucket, so he was big for us that way.”

“My role has changed so many times since I've been here,” said Lowry. “But it don’t matter. As long as we win games, I'm always going to ride with my teammates, whatever they need from me.”

In all three of the Raptors’ wins over Boston, Lowry has given them everything they’ve needed, and more. All three performances will go down among his best in a Toronto uniform, and that’s a long list.

Lowry was already the greatest player in franchise history and a future hall-of-famer. All this series has done is further cement his legacy.

And, now, thanks in large part to his efforts, the Raptors are still alive and Lowry has another chance to add to that legacy on Friday.  ​