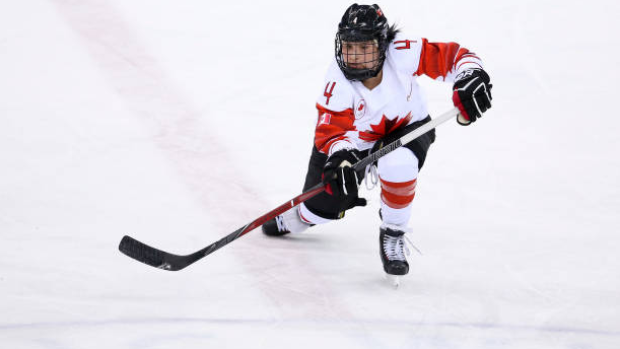 Brigitte Lacquette broke barriers on the ice when she became the first First Nations player to be named to Canada’s women’s hockey team. Now she wants to help others forge an easier path in their own hockey journeys.

The 2018 Olympic silver medallist has partnered with Kruger Big Assist, a program designed to help youth hockey associations with financial assistance to make the sport more accessible for families in need.

“I know for myself, growing up, my parents didn't have a lot of money,” Lacquette told TSN. “I was fortunate enough to be able to have my reserve, which is Cote First Nation, offset the costs for hockey registration fees.”

This year, Kruger also launched The Second Assist – a $50,000 grant that is given to one of the 15 Big Assist-winning associations to support diversity, equity and inclusion in hockey.

Last week, the Cape Breton Blizzard Female Hockey Association was named the recipient of the inaugural grant for its dedication to inclusion in the game, including working with First Nations communities.

“I feel like diversity, equity and inclusion goes a long way in minor hockey, and we have to make hockey a more inclusive space, a safe space for youth to want to play the sport,” Lacquette said.

Originally from Mallard, Man., a small community of fewer than 200 people, Lacquette, 29, said many of her toughest times in the sport came at a young age.

“A lot of the times that I've experienced racism has been at the minor hockey level,” she said. “I would hate to see other kids going through exactly what I went through. I got through it, but I had a strong support system around me to turn those negatives into a positive. A lot of kids don't have that.”

Lacquette, who also serves on the NHL’s player inclusion and female hockey advisory committees, believes that programs like the Kruger Big Assist are vital to help BIPOC youth feel welcome in a sport where they are underrepresented.

“Traditionally, hockey is a white man’s sport,” she said. “We are obviously trending in the right direction. We're making steps. But I truly believe that this starts at the minor hockey level.”

The Canadian defender also became the first Indigenous woman to scout for an NHL team when she joined the Chicago Blackhawks last year. She fully embraces being a trailblazer and a role model for Indigenous youth.

“It's an absolute honour,” she said. “I didn't have that person that I could relate to in terms of my skin colour… I looked up to Jordin Tootoo and a lot of other Indigenous hockey players that play in the NHL, but there wasn't a woman.”

Lacquette said she truly realized the importance of being a visible Indigenous woman in hockey when she returned from the 2018 Olympics in PyeongChang and visited schools in Indigenous communities.

“To actually meet the kids and see their eyes light up – that was it for me, where it was like, ‘Wow, I can actually make a difference in these kids’ lives.’ That was so inspiring,” she said.

Before Lacquette signed with the Blackhawks last July, she did her own research on Chicago’s logo and Black Hawk, a Sauk leader and warrior in the Thunder Clan. She says Chicago is honouring the Indigenous icon and points to land acknowledgements done by the organization.

Lacquette, who is based out of Calgary, watches prospects in the Western Hockey League. She believes her new role is another means toward increased diversity, equity, and inclusion in hockey.

On the ice, Lacquette still plays for Calgary’s Team Scotiabank in the Professional Women’s Hockey Players Association (PWHPA). She was not part of Canada’s roster for the 2021 IIHF Women’s World Championship or last February’s Olympics, where the team won gold.

Lacquette says her potential return to the national team is “up in the air,” but is proud of her teammates’ accomplishments, particularly Sarah Nurse, who became the first Black woman to win Olympic hockey gold and broke the tournament scoring recording with 18 points.

“It's amazing to see. I'm very proud of Sarah,” Lacquette said. “She's a phenomenal hockey player and an even better person. It's awesome to see because that shows young girls and BIPOC youth that they really can achieve anything that they set their mind to.”

It’s these types of milestones that make Lacquette optimistic about the future of the sport.

“I feel like racism, unfortunately, that's always going to be there. But I feel like we are trending in the right direction.”