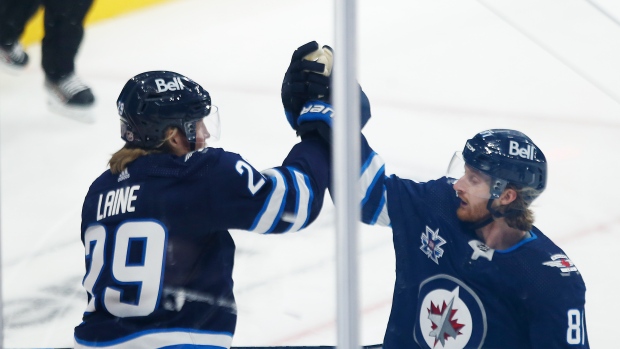 WINNIPEG — Patrik Laine let his play on the ice speak volumes Thursday night with a three-point performance that should squash questions about his committment to the Winnipeg Jets.

After registering a goal and an assist in regulation, the 22-year-old Finnish winger scored the overtime winner, leading the Jets to a season-opening 4-3 win over the Calgary Flames.

“Hopefully I can just build off that game," Laine said after the victory. "There’s a lot of things I need to look at. The three points isn’t going to tell the whole truth of the game. But it’s a good start.”

His big night comes after Laine's agent made comments during the off-season suggesting that both the powerful forward and the Jets could benefit from his being traded. Laine ducked questions on the subject as training camp opened.

His committment to the team seemed clear Thursday as Laine not only lit up the scoreboard, but stood up for his teammate.

With less than a minute to go in the second period, Calgary's Noah Hanifin cross-checked Laine's linemate Kyle Connor into the boards.

Laine responded by going after Hanifin and a scuffle ensued, with Laine and Flames left-winger Matthew Tkachuk exchanging blows.

“That’s just the type of guy he is. He’ll go to battle for his teammates," Connor said. "He’s a pretty selfless guy and I think you can see that. I have his back out there and vice versa. He’s just an all-around great teammate, I’d say.”

Hanifin was called for cross-checking, and Laine and Tkachuk were each sent to the box for roughing.

It was somewhat of a disappointing result for Laine, who rarely drops the gloves and was hoping he'd register a Gordie Howe hat trick -- a goal, an assist and a fight.

“The one time I drop my gloves, I get a two-minute penalty. So that’s kind of embarrassing," he said.

The tussle helped ignite a Winnipeg (1-0-0) side that was tepid at times on Thursday.

Calgary (0-0-1) dominated play through much of the first period, starting just 4:28 in when Tkachuk scored on the second shot of the game with a deflection in front of the Jets' net.

Johnny Gaudreau and Elias Lindholm added goals before the end of the first frame, and the Flames held a 3-1 lead heading into the break.

During the intermission, Jets coach Paul Maurice went into the locker room and told his group to relax. His words changed the way the group played heading into the second period, said Paul Stastny.

“Sometimes when you’re kind of thinking too much, your feet are in quicksand, you’re looking around too much. Everyone was kind of hoping for things to happen," he said. "The first game of the season it always kind of happens like that. I think it’s just nerves, in a sense.”

Thirty-four seconds into the second period, Nikolaj Ehlers took a shot from the slot and, while Jacob Markstrom made the stop, he couldn't control the rebound. The puck squirted out to Mark Schiefele who popped it in from the side of the net to make it 3-2.

Connor's power-play goal evened the score at 3-3, and Laine buried the winner 1:18 into overtime, streaking from deep in his own end all the way past the Calgary blue line. He fanned on his first shot but quickly recovered and beat Markstrom on his second attempt.

Laine has worked harder in training camp than any other time during his career in Winnipeg, and is bigger, stronger and more mature than ever before, Maurice said.

"He’s a very driven young man. He wants to be great. And sometimes you have to learn how that unfolds," the coach said. "What he got tonight he earned. He didn’t get lucky, he didn’t have a bunch of bounces go for him. He just worked and worked.”

Markstrom was making his debut for Calgary after signing a six-year, US$36-million deal in free agency and stopped 30-of-34 shots Thursday.

The game was a rematch of last year's playoff series where the Flames dispatched with the Jets in four games in the qualifying round.

It was also the first of nine meetings between the two clubs in the pandemic-condensed 56-game season.

The Flames will host the Vancouver Canucks on Saturday, and the Jets are set to visit the Toronto Maple Leafs on Monday.

NOTES: Winnipeg's Connor and Calgary's Lindholm each registered a goal and an assist. ... Ehlers played after missing Wednesday's practice due to COVID-19 protocols. He says he woke up with a sore throat Wednesday morning but was given the OK to play on Thursday.