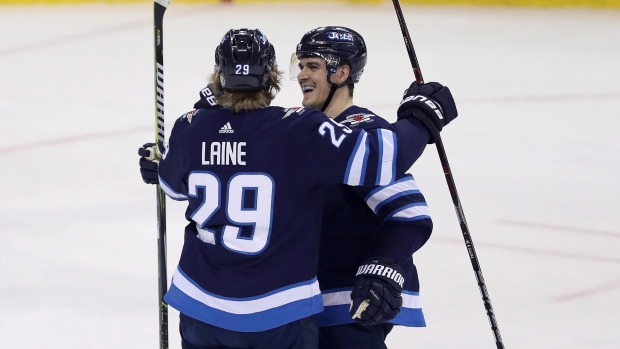 WINNIPEG — Patrik Laine promised he'll do better in the next Winnipeg Jets game.

The vow came after the sophomore sniper scored twice Sunday in a 4-2 victory over the Dallas Stars.

The performance tied him at 43 goals with Alex Ovechkin as the top NHL goal scorer, but he said he hopes to vault his boyhood idol when the Jets host the Los Angeles Kings on Tuesday.

"Like I've said before, maybe a week ago, I don't want to be tied. I want to take the solo lead and I'll try to do that next game," Laine said.

Laine also extended his point streak to 15 games. It's the longest active run in the NHL and adds to his league record for the longest point streak by a teenager. The streak includes 18 goals and eight assists.

Defenceman Ben Chiarot and Blake Wheeler, with an empty-netter, also scored for Winnipeg (43-19-10), which sits second in the Central Division seven points ahead of Minnesota.

Mattias Janmark and captain Jamie Benn had goals for Dallas (38-27-8).

"Laine did Laine things again against us," Benn summed up.

The Winnipeg winger now has 14 goals in nine career games against the Stars.

Connor Hellebuyck made 28 saves for the Jets, who tied a franchise record for wins in a season with 43 in the second game of a six-game homestand. The last time they hit that mark was 2014-15, when they made the playoffs for the first time since relocating to Winnipeg from Atlanta.

The victory also gave Winnipeg a sweep over the Stars in the teams' four-game season series.

Goalie Ben Bishop stopped three shots before leaving the game with 9:49 remaining in the first period after whipping out his left glove to snag a Bryan Little shot. Playing his second game after missing five with a knee injury, Bishop stood in the crease bent over before skating off.

Kari Lehtonen replaced Bishop and made 17 saves for the visitors, who finish off a six-game road trip Tuesday in Washington. Dallas is 0-3-2 so far.

"He stepped up for us, made some huge saves," Dallas defenceman John Klingberg said of Lehtonen. "We know we have two good goalies and they're probably our best players every night now so we depend on both of them."

Winnipeg led 1-0 after the first period and 3-2 after the second.

Benn said he took a "stupid" tripping penalty late in the opening period. It was also costly.

Laine scored with 0.4 seconds remaining in the first following a supreme effort by Wheeler.

After losing an edge and falling down near the bottom of the right circle, Wheeler swept a one-handed pass through the feet of Stars defenceman Dan Hamhuis to Laine out in front and he put a high shot past Lehtonen.

It was Laine's 19th power-play goal, tops in the NHL. Wheeler picked up his 61st assist of the season, also a league high.

"It doesn't matter if he is standing or sitting, he's going to find me," Laine said of Wheeler. "I think it came from the (defenceman's) skate, that's what I saw. But, like I said, he fell down and still found me. He's a special player, he can find those passes."

Janmark tied it up at 1:13 of the second, but Winnipeg responded 64 seconds later as Chiarot's one-timer from the point went through traffic.

A wobbly Jacob Trouba left the ice early in the third period after colliding with Benn and didn't return. It was the defenceman's second game back after missing 20 with a lower-body injury.

"Head to head contact there on the ice," Jets coach Paul Maurice said, adding Trouba will be looked at Monday.

Jets centre Adam Lowry picked up an assist on Chiarot's goal in his first game back after sitting 19 with an upper-body injury. Centre Mark Scheifele and Enstrom also returned from injury. Scheifele got a helper on Wheeler's goal.