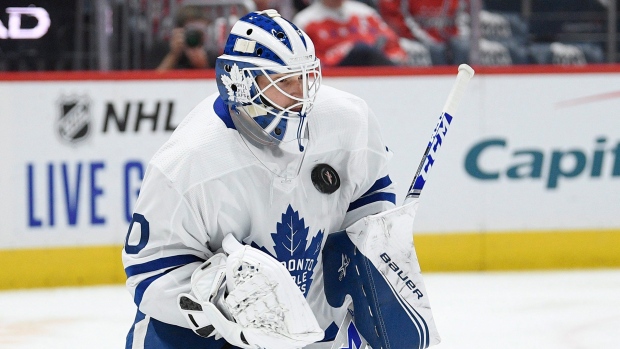 TSN Toronto Reporter Mark Masters reports on the Maple Leafs, who held a practice at Ford Performance Centre on Thursday ahead of Friday night’s home game against the San Jose Sharks.

When Michael Hutchinson dresses as the backup goalie, he will hit the gym to do some weights during intermissions.

"I do [a] lift in half gear," the 31-year-old explained. "It keeps you warmed up and engaged and ready."

It's a routine he started during the 2017-18 season when he played in Winnipeg.

"I ended up coming into a lot of games in relief," he recalled. "Usually you don't feel good as a goalie, especially if you're coming in late in the second period or into the third period, because you've been sitting around forever. I always explain it as, imagine sitting in a car ride for two hours without moving and then you get out and someone tells you to run sprints."

Usually, the backup goalie is trying to find success in suboptimal situations for the team. Oftentimes, the backup goalie will play on the second night of a back-to-back set. But this week the Leafs are making life a bit easier on their No. 2 'tender.

Hutchinson will make his season debut on Friday night when the San Jose Sharks, who play Thursday night in Ottawa, visit Scotiabank Arena. Jack Campbell will get the start on Saturday against the Penguins in Pittsburgh.

"Want to put Hutchinson in a position to succeed," coach Sheldon Keefe explained. "We thought coming off a practice day right into a game day tomorrow is a good opportunity for him to do that ... I thought he was outstanding in practice today. Dialled in."

Hutchinson started the season in the American Hockey League, but was recalled after Petr Mrazek sustained a groin injury last week. It's a familiar situation for the Barrie, Ont., native. With Frederik Andersen and Campbell both missing time due to injury last season, Hutchinson appeared in eight games with the Leafs going 4-2-1 with a solid .919 save percentage.

"He's proven to be tremendously valuable," Keefe said. "We saw last season, he came up in that role and did a really good job for us, won some big games. He's really done a nice job of building the confidence that the organization and his teammates have in him. Our ability to have a guy of that calibre, who's played in the league as much as he has, as a third goaltender, it's a nice asset."

Campbell has appeared in all four games so far. The Leafs gave him most of Tuesday's practice off and now he'll get an extra day to prepare for his next start.

"Just managing his workload a little bit better," Keefe said. "So, day off yesterday, hard practice today, get himself going for two consecutive days on the ice, and be ready to play on Saturday. We thought it made sense for both goaltenders and made sense for our team."

The Leafs may need to lean on their goalie more on Saturday night when they travel to Pittsburgh to take on the Penguins, who will be off on Friday.

Campbell is in his first season as the incumbent starter on a team and has shown, so far, that he's up to the challenge.

"Phenomenal," said veteran forward Jason Spezza. "Getting a chance to play lots of games in a row last year gave him that confidence, knowing he can do it, and now he looks very calm with it, very businesslike."

"He's been on fire," observed William Nylander. "I've told him, he's been incredible and just needs to keep playing the way he's been playing and we'll be good."

Ondrej Kase missed Tuesday's practice after blocking a shot off his foot in Monday's game.

"I had the skate tight so after the game you take it off and the swelling is coming," the right winger explained. "During the game, it felt good."

Kase was back on the ice at Thursday's practice. How'd he feel?

Kase was limited to just three games last season due to concussion issues. He took a big hit in the season opener against Montreal and jumped right up.

Kase is more worried about generating offence these days. He's fired 11 shots on net, but is still looking for his first point as a Leaf.

"We didn't score as a line so I feel like we need to go more to the net," the 25-year-old Czech native said. "I felt we had some chances, too, so we didn't have some luck. The game wasn't bad, but we can be better ... I need to handle the puck more in the offensive zone, that's what I'm looking for."

Keefe likes what he's getting out of the third line, which features Kase and countryman David Kampf.

"I've been giving them some difficult assignments and they've handled it well," the coach said. "It's nice to have a serviceable player like [Kase] who goes out and gives us everything he has every shift no matter what is asked of him."

Kase's CorsiFor percentage is 55.7 even though he leads the team in defensive-zone starts (14), per NaturalStatTrick.com. Kampf boasts similar numbers.

"Competitive, smart players that each have the ability to drive the puck up the ice," Keefe said. "That's such an important quality for a defensive player. The defensive players that I like are guys that are smart enough to be on the right side of the puck and not make mistakes, not open up the ice for the opposition yet, at the same time, they get the puck and are able to make positive plays and get you down the ice and get your team set up on offence. That, to me, is what you want in a checking line. Having guys who are really good defensively, but never have the puck offensively or don't have the ability to set up your other lines, that doesn't really work, in my opinion."

During a game against the Sharks on Nov. 28, 2018, Mitch Marner broke his stick while blocking a shot in the defensive zone. Seconds later he was skating by the bench heading up ice as part of an odd-man rush and Bobby Hastings handed him a new stick in stride from the bench. Seconds later, Marner made a great pass to set up a John Tavares goal.

Apparently, there's a meticulous method that allows the Leafs head equipment manager to be ready with a replacement twig so quickly. Members of the Arkells sat behind the Leafs bench on opening night and the band's TikTok account posted a video of Hastings with his fingers on each of the extra sticks belonging to the players on the ice.

"Disappointed the video's out, because that's Bob's trade secret," Spezza said with a grin. "We don't like giving those out. Bobby's elite. He's incredible with the detail he has during games, in the dressing room and just an all-around great person and somebody who cares deeply about the team. He gets assists on goals for a reason, because he's got great details."

"He is incredibly detailed," said Keefe. "An example like that is nice to see. As a coach, you're so focused on what's in front of you that you very rarely see what's going on behind you even though it is so close. You can see how seriously he takes it. We believe we got the best [guy] in the league."

neat view of bobby hastings hard at work, from who else but the arkells pic.twitter.com/mEAE71HTsX

Using an unfamiliar stick is a big issue for players, who tend to be creatures of habit.

"Everybody else's sticks suck and mine are the best," Spezza said laughing. "I actually had to take penalty shot with Bryan Smolinski's stick once. Back when the shootout started they measured sticks before the shot and I was using a wood stick and the way that I shaved it, I wasn't allowed to use it for the shootout, apparently, so I had to use his stick for the shot. After the game we got clarification that the ref was wrong and I could've used my stick, but I took the shot with Smoke's stick and missed and wasn't happy about it."

"It's weird," agreed defenceman T.J. Brodie. "It's always in the back of your mind. I played with a righty before and you're just hoping the puck gets out or there's a whistle or something."

The Leafs have adopted a relaxed dress code this season, but Spezza is sticking with the suit-and-tie look for now.

"We'll see how it goes," the 38-year-old said. "I don't want to rule anything out. Maybe on the road I'll loosen it a little bit, but walking into the rink in Toronto I feel right wearing a suit. So, it's just kind of my values.

"I think it's great, though, that we're letting guys dress how they want and feel good and you see it in other sports. You see the Raptors doing it. I think it's a great thing. The younger generation has a love for the fashion and for showing their personalities. It's very subtle and doesn't effect our game at all and allows guys to have personality. So, it's great. I think the fans will enjoy it."

Brodie is a reliable defenceman, who usually doesn't stand out on the ice, but a lot of reporters were doing double takes on Thursday as the 31-year-old appeared at practice without his trademark beard.

"It's been a while," he said of the clean-shaven look. "Maybe in the summer just to get rid of the tan lines, but other than that it's usually pretty scruffy."

The Leafs held their annual Halloween party on Tuesday night and Brodie went as celebrity chef Guy Fieri as part of a costume organized by his wife.

"I'd shaved the goatee in so I think they [teammates] knew it was coming," Brodie said. "My daughter was a little surprised though, but other than that it's good. It'll be back soon."

How did his daughter react?

"She was just laughing."