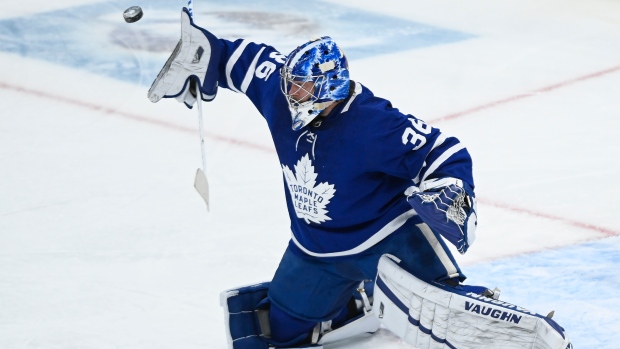 TORONTO —  For the time being, the Maple Leafs’ net belongs to Jack Campbell.

Coach Sheldon Keefe confirmed as much on Wednesday when he shared there is “no timeline attached” to the return of Frederik Andersen from a nagging lower-body injury.

Andersen has been sidelined since Saturday, and Keefe said the message from Toronto’s medical staff is not to expect Andersen back in the mix for at least seven days.

Andersen missed all three of Toronto’s practices this week heading into Thursday night’s game in Ottawa. Campbell will get that start for the Leafs, his second straight since returning from a leg injury, and the Leafs will cautiously increase his workload from there.

“He's going to have an opportunity to play more here now, and we have to just make sure that we manage that well and not put him in positions where he may reinjure himself,” Keefe said. “We want to be smart with it. We'll take it one game at a time, and really one day at a time. Soupy responded very well [after the last game] and that was a big test, that’s really positive.”

Campbell originally hurt his leg back on Jan. 24 against Calgary, and came back for one start in Edmonton on Feb. 27 where he re-aggravated the problem. He returned to start Saturday’s game against the Flames, posting a second straight shutout to give him a 4-0-0 record on the season with .968 save percentage.

Andersen is now in a similar position to what Campbell just went through. Andersen originally suffered the injury on Feb. 15 against Montreal, and he came back March 3 in a win over the Oilers.

His start last Friday was a particularly abysmal 14-save performance, with a season-low .778 save percentage. Campbell started the next night, helping Toronto halt a three-game losing streak.

“I feel really good and after the game, it was definitely a relief to feel really good with my body,” Campbell said. “The trainers have done a great job with me every single day and I'm thankful to the coaches for giving me the time [to heal]. I am feeling really good and excited to back out there whenever my number's called.”

Campbell has never been a true starter in his NHL career. He appeared in a career-high 31 games for the L.A. Kings in 2018-19, and played in 20 more games the following season before being traded to Toronto in Feb. 2020. The Leafs tapped him in only six games prior to the NHL’s shutdown due to COVID-19.

When he is in the crease, Campbell seems to find ways to connect positively with teammates – sometimes without even realizing it.

There was one such moment in Saturday’s game that ended up going viral. Campbell was spotted after a whistle giving defenceman Justin Holl a hearty wink, surprising even himself with the action.

“I had no idea I even had the ability to wink. But you learn something new every day,” Campbell said. “I literally didn't know I winked until I got home and saw something online. We always have a good time out there, but I couldn't believe I winked. It was pretty funny.”

Holl was amused too, especially considering it was in reaction to a broken play of sorts.

“There was a goalie exchange behind the net, and I called for the puck but had wanted it a little harder, so it was kind of a miscommunication,” Holl explained. “So I went up to him after and was like ‘my bad’ and he said ‘my bad’ back with the wink. It was pretty funny. It was legendary actually.”

Any frustrations Campbell has experienced this season haven’t made their way into his demeanour or diminished his play, which is why he’s such a popular a figure in Toronto’s room. As uncertainty swirls around Andersen, confidence in Campbell is at an all-time high.

“Soup is definitely very positive, and it’s very noticeable,” Holl said. “He’s just so relaxed and he’s having fun out there. I think everyone knows when you’re having fun is when you’re playing your best.”