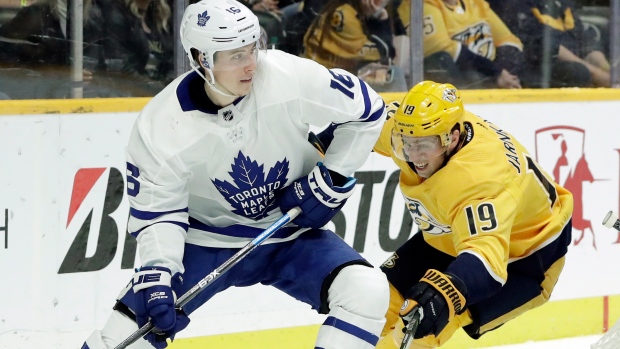 TSN Toronto reporter Kristen Shilton checks in daily with news and notes on the Maple Leafs, who held a team meeting before facing the Buffalo Sabres at KeyBank Center Wednesday night.

It’s rare that a losing effort can also be a beacon of light, but that’s exactly what Tuesday’s 3-0 loss to the Nashville Predators was for the Toronto Maple Leafs.

After four straight games last week where Toronto was outscored 23-15 and went 1-3-0, the Leafs came away from Nashville having allowed their second-fewest shots on goal this season (20) and were buoyed by an overall improved defensive performance.

“I liked everything [about that game] except we didn’t score,” said Leafs coach Mike Babcock. “I thought Pekka Rinne was real good [in a 22-save showing]. I thought we were good though, I thought we were the best we’ve been in a long time. The fewest scoring chances in a long, long time and I think that’s real important for our team. Gives us some confidence coming into tonight’s game.”

Babcock revealed that defenceman Martin Marincin is still sick with the flu and won't play Wednesday against the Sabres, leaving the same lineup, save for Garret Sparks in net, as Tuesday's loss. But the Leafs’ bench boss also hinted there could be another tweak coming, but he won't make that call until warmups.

John Tavares said after Tuesday’s defeat how positive it was that the Leafs were on a back-to-back, and would get to keep their momentum going immediately in Buffalo. His teammates concurred, and are holding fast to the notion that this slump will be beneficial in the longer term.

“We’re battling through [this], and it’s going to be a big game for us tonight,” said winger Zach Hyman. “I think every team goes through adversity. You go through times where things are tougher and that’s where you have to dig deep and you come out of it stronger and it’s better to be going through it at this time of the year than in April.”

All the smaller things Toronto did well in Nashville – limiting chances, playing tight through the neutral zone, breaking pucks out quickly – need to be carried forward now, but without impacting their offensive output. It’s a balancing act that the Leafs are running short on time to figure out with only nine regular season games left.

“Sometimes you get away from the little details,” explained centre Patrick Marleau, “and you play a game like last night, a team that’s very detailed-oriented, and it forces you to do the same. Guys get used to that again and it feels good to play the right way and do those little things. I think we have to focus on what we have to do to be successful as individuals, as a club. If we do that, we’ll be fine.”

In the aftermath of the Leafs’ 6-2 loss to the last-place Ottawa Senators on Saturday, Sparks called himself and his teammates out for “need[ing] more emotion” and saying they should “get angry" to help stop their current skid.

It was a bold statement by Sparks, a backup who has appeared in only eight games since Christmas and posted a 2-6-0 record. Given Sparks generally only plays the second night of Toronto’s back-to-backs, he didn’t have to wait long for another chance between the pipes after last Saturday’s debacle, and all eyes will be on the netminder to see how he lives up to his word.

“I would think so,” said Babcock of whether there’s more pressure on Sparks in Wednesday’s game. “I expect him to play well. If you’re the goalie and you play and the team doesn’t win, and you own it, you can fix that. Any time you’re looking for any other help in life, it doesn’t usually go your way. So just own what you do, and play as hard as you can tonight. We’re going to play hard for Sparky and he’s going to play well.”

While the other Leafs can appreciate Sparks is the type to “wear his heart on his sleeve” as Mitch Marner put it, they don’t necessarily agree there’s been a lack of emotion to their game.

“We believe in each other and we believe in our locker room,” Hyman said. “We’re going to go out there and play the way that we play and play the right way and when we do that, we’re a really good team, we’re hard to beat. We’ll be successful.”

And becoming angrier may not even help the Leafs anyway, especially if it distracts them from the bigger focuses on the ice.

“I would think for the most part everyone wants to do their best and get going here, and we have to do that as a team,” said Marleau. “[That’s] getting the shots, more pucks to the net, making sure that we have guys around there. Games are going to be tighter, you’re not going to get as many shots, but we have to find a way. It’s a good little stretch here to build our game back up and get ready for playoffs.”

The last time Alex Nylander stood opposite his brother William in a game, it was April 3, 2017, and the younger Nylander was making his NHL debut.

In the nearly two years since then, Alex has honed his craft primarily with the American Hockey League’s Rochester Americans, while William became an integral part of the Leafs’ offence and went through a highly publicized contract dispute with the team last fall.

Regardless of how their paths diverged, Alex is thrilled they’re set to cross once again on Wednesday.

“It’ll bring back memories from when we were kids,” he said. “I’m just going to enjoy it and play my best. Just seeing him out there and not from the stands or on TV, it’s a completely different feeling. It was a lot of fun [last time].”

This season only recently became enjoyable again for William, as he struggled to reestablish his game following the stalemate that cost him two months of the schedule. The elder Nylander didn’t play until Dec. 6, and notched only one goal in his first 23 games.

Nylander has picked things up in the last week though, tallying five assists in five games while back on a line with Auston Matthews and Andreas Johnsson.

“It was obviously a bit different for him this year not coming in right from the start, but I think he’s done really well lately and he needs to keep going the way he’s been playing,” Alex said. “It obviously took a couple more games than he thought and we all thought it was going to take [to get rolling]. Some things take longer than others, and he’s been doing really well lately.”

Babcock agrees, and thinks the unique opportunity to play against your sibling in the NHL should bring out the best in both Nylanders.

“Find out who the best Nylander is in a hurry, right? There’s got to be some family bragging rights I would think,” Babcock said. “It’s got to be exciting for both of them, for the family. [William has] been much better, skated better, won more battles, and that’s the whole key for him. When Willy is physical on offence, that’s when he’s at his best. We need him to be at his best.”