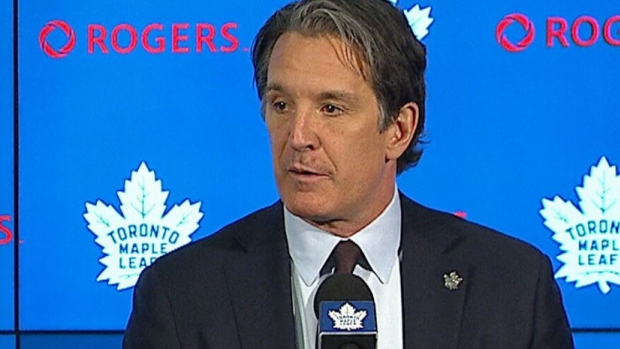 TORONTO — As expected, the Toronto Maple Leafs stayed in-house in finding their new general manager. But in choosing Kyle Dubas on Friday, they opted for a far different GM than Lou Lamoriello.

Dubas, who joined the team as assistant GM in July 2014, becomes the 17th GM in Toronto franchise history.

Dubas will appear on Overdrive on TSN 1050 Toronto this afternoon, which will stream live on TSN.ca.

Dubas is 32, an advocate of analytics and relatively new to the National Hockey League. He succeeds the 75-year-old Lamoriello, a grizzled veteran of the league who is no stranger to building championship franchises.

Brendan Shanahan, President and Alternate Governor of the @MapleLeafs, announced today that Kyle Dubas has been named the 17th General Manager in the Club’s history. #TMLtalk

Lamoriello was shifted to the role of senior adviser with the Leafs last month, with most expecting team president Brendan Shanahan to choose between Dubas and 55-year-old Mark Hunter, whose club title is also assistant general manager.

Before joining the Leafs, Dubas served as GM of the Sault Ste. Marie Greyhounds in the Ontario Hockey League.

The Marlies were AHL regular season champions this season for second time in three years. The Leafs note that in Dubas' four seasons as GM, the Marlies have a record of 190-90-20-4 and have developed eight members of the current Leafs roster: Connor Brown, Connor Carrick, Travis Dermott, Zach Hyman, Andreas Johnsson, Kasperi Kapanen, Josh Leivo and William Nylander.

At the time of his hiring by Sault Ste. Marie, Dubas was the second youngest GM in OHL history at the age of 25.

In 2015, Forbes magazine named Dubas as one of the sports industry's brightest young stars in its annual Top 30 Under 30 in Sports list.

John Chayka became the youngest general manager in NHL history in May 2016 when, at 26, he was promoted to GM by the Arizona Coyotes.

The Leafs have gone young in the front office before. Gord Stellick became the league's then-youngest general manager at 30 when he was hired as GM in April 1988. Stellick started with the team when he was 17.