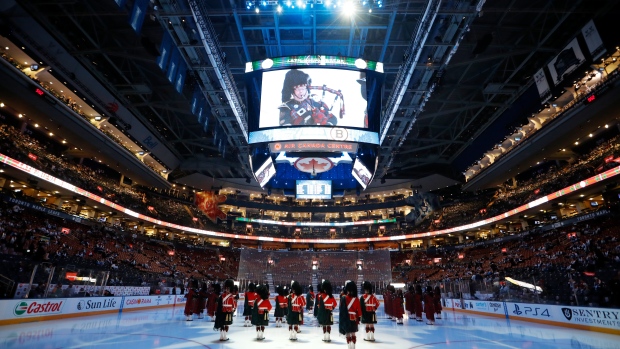 At Shanahan's behest, the organization finally changed the stale policy, ringing in their centennial season by retiring the numbers of 17 players, including most notably Dave Keon.

"I was very pleased that they made the decision and they thought that retiring numbers was the right thing to do for the franchise," Keon said.

Toronto revealed the honours during a ceremony preceding Saturday's home opener against the Boston Bruins. Brand new banners were raised for each of the newly retired numbers as well of those of Bill Barilko and Ace Bailey, the only two players to have their numbers retired previously.

The Leafs had been against retiring numbers for decades, opting instead to honour the numbers of past greats. Only those who suffered a tragedy while members of the team previously had been retired — Barilko passing away in a plane crash and Bailey suffering a career-ending injury on the ice.

It was the latest offering of respect to the past under Shanahan, who has made it a priority since he was hired in 2014 to better celebrate successful eras in the team's past. Shanahan speerheaded an overhaul of the team's sweater and logo earlier this year, opting for a classic style that harkened back to the Cup winners in the 1940's and 1960's.

The more he learned about the organization during his first season in charge, the more he failed to see a reason for the longstanding policy against retired numbers. But he kept plans to eventually change course mostly to himself, informing only general manager Lou Lamoriello and head coach Mike Babcock well in advance.

Keon, a four-time Cup-winner with the Leafs, wanted no part of the organization for decades in part because of past unwillingness to retire his sweater. Relations between the two sides have thawed in recent years, compounding with his name being raised to the rafters at Air Canada Centre for the first time.

He was also voted No. 1 in a list of the 100 greatest players in team history on Friday.

"I don't know why Toronto thought that at the time honouring numbers was the thing to do," Keon said. "All the great franchises retired numbers and honoured the players who had brought glory to the franchise. I didn't think that the Leafs were any different."

The honoured players and/or their representatives took to the ice in a circle around centre-ice, clad in matching navy blazers with a Maple Leafs crest. They were informed of the decision to retire the numbers just before taking the ice in a meeting led by Shanahan, which included a video and surprise appearance by Keon.

New banners celebrating each of the team's 13 Stanley Cups were also put on display during an elaborate half-hour ceremony. Included in those new banners were more accurate depictions of each version of the Cup, from the shorter version in 1918 to the tall, lean model in the 1940's and finally to the more current look of today from the victorious teams of the 1960's.

Earlier this week the Leafs also revealed new statutes on their Legends Row exhibit for Keon, Broda and Horton.

James van Riemsdyk was the only current Leaf forced to change his number as a result of Saturday's changes, switching from No. 21 to No. 25.

Unlike honoured numbers, the newly retired sweater numbers will never be worn again.

"The numbers will always be there," Johnny Bower said.