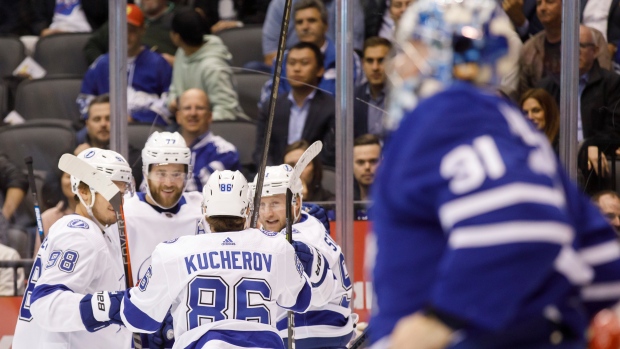 Nikita Kucherov celebrates his goal against the Leafs Thursday night. , The Canadian Press

TORONTO – There was no good explanation the Maple Leafs could offer for the 7-3 drubbing they took from the Tampa Bay Lightning on home ice Thursday night, at least not right away. What is certain is that, in the wake of this third consecutive loss, the Leafs have a long way to go towards becoming the team they want to be.

“It's not what we want. We’re not happy,” said Morgan Rielly. “We have to be much better than we were tonight. And we believe that we're capable of doing that and we have confidence that we’re going to learn from our mistakes and move forward and improve. But we've got to be way better.”

The loss moves Toronto to 2-2-1 to open the season, an inauspicious start that’s been punctuated by the kind of defensive zone errors that cost the Leafs dearly against Tampa. And it didn’t help that Frederik Andersen turned in such a subpar performance as well, stopping only 21 of 28 shots for a .750 save percentage before being replaced by Michael Hutchinson early in the third period.

Leafs are back!  Get access to livestream games, news, highlights & analysis with TSN Direct – the exclusive streaming service from TSN. Subscribe Now >

It was just the second time in his four-season stint with Toronto that Andersen has given up seven goals in a game, the first time coming back on October 25, 2016, also against the Lightning.

“Definitely could have played some situations differently,” Andersen admitted. “We've just got to get back to playing our way. We're going to flush this one and I'm sure we can prepare for practice tomorrow and move forward.”

Andersen’s teammates tried deflecting responsibility for the loss off his shoulders and onto their own sloppy defensive efforts in front, plus the three first period penalties that head coach Mike Babcock said "got us out of synch," but the goalie insisted, “I don’t think I was without blame either.”

On a night like Thursday, there was more than enough of that to go around.

"I’ve liked the majority of everything that's gone on [this season]. I didn’t tonight," said Babcock. "In the end, we didn’t look like a very good hockey club. They looked quicker, better, more organized. You can say whatever you want, about skill or whatever you want, but we didn’t give ourselves a chance. They were fast. They were on the puck. They were tenacious they did it right. And they won."

The game started out evenly enough between the sides over the opening frame, the highest scoring period of the NHL season to date.

The Leafs and Lightning combined for seven goals in 20 minutes, three for Toronto (from Andreas Johnsson on the power play, and Auston Matthews and John Tavares at 5-on-5), and three of Tampa’s four by their newly reunited top line of Nikita Kucherov, Steven Stamkos and Brayden Point (who made his season debut after missing three games in recovery from off-season hip surgery).

Point added another goal in the second period, to put the Leafs in a 5-3 deficit entering the third, but Matthews still thought Toronto had – and then squandered - a good chance of getting back in the game before goals from Ondrej Palat and Kucherov sealed the Leafs’ fate.

By the end, the Leafs had given up 11 points to Point, Kucherov and Stamkos, proving wholly ineffective despite keying on how dangerous that trio would be before puck drop.

“We'd like to have this game back, especially that third period,” said Matthews. “[The top line] made us pay tonight. I thought going into [the third], we felt like the game was still in reach, and we just kind of give it away there. You know, just mental errors, mental mistakes. I think we just have to regroup as a team.”

That starts with hard reflection on how and why the Leafs fell apart defensively against Tampa, a combination of errors in technique and plain poor effort. By the third period, the Leafs could barely get out of their own end, producing a meagre 36 per cent possession while Tampa consistently kept the pressure turned up.

“We didn't execute at a high enough level. Didn't play right. They were better than us,” surmised Babcock. “Tonight was disappointing. They won all the 50-50s, all the loose puck battles. It wasn’t a very good night for us. I thought it was going to be a hell of a game and I don’t think it was.”

“There’s lots of video to watch and things that we can do better,” added Rielly, who was minus-2 on the night. “Tonight’s an example of a game that we got to learn from moving forward, it's important that we clean up certain areas of our game. And we'll make sure and do that moving forward.”

It was a point of pride for the Leafs a season ago that they didn't allow a losing streak to reach three games until well into February. This year, it’s barely October and they’re already struggling to earn two points. But Toronto sees no reason to hit the panic button yet, not when there’s plenty of time left in a long season to make right all that’s gone wrong so far.​

“Letting seven in at home is just not acceptable,” said Tavares. “We have to do a lot better job of defending. We just didn't execute at a very high level and they did and we just didn't do the right things that are going to consistently lead to good things and lead to results. That kind of effort tonight's not going to win us many hockey games.”