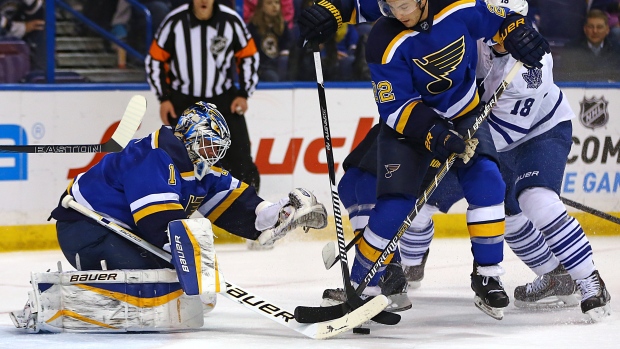 ST. LOUIS - Brian Elliott was a big Toronto Maple Leafs fan while growing up in Ontario. So the St. Louis Blues goalie got a little extra satisfaction out of shutting them out.

Elliott stopped 27 shots for his third shutout of the season and 28th of his career as the Blues topped the slumping Maple Leafs 3-0 on Saturday night.

"It's awesome," Elliott said. "It's all about the two points, but I grew up bleeding blue for the Maple Leafs. It's fun to go out and get a shutout against them for sure."

After allowing three goals in each of his last two games, Elliott got back on track with his 19th shutout for the Blues.

Blues defenceman Alex Pietrangelo said there was never any doubt about Elliott's play.

"We've had no questions inside this room," Pietrangelo said. "We know what he can do. Tonight's a prime example; outstanding performance by him. I thought we did a great job, too, eliminating second chance opportunities. He's pushing pucks where they can't get them and we're clearing in front of the net.

"It's a good overall effort defensively."

Elliott, who missed nearly five weeks earlier this season with a knee sprain, moved to the top spot in the NHL in goals against average at 1.90 and fourth in save percentage at .929.

Blues coach Ken Hitchcock thought Elliott was back at the top of his game.

Alexander Steen extended his scoring streak to a career-high nine games with a goal and an assist, and Kevin Shattenkirk and T.J. Oshie also had goals for St. Louis. The win was No. 685 for Hitchcock, who passed former Maple Leafs coach Pat Quinn and moved into sole possession of fifth place on the career victories list.

Jonathan Bernier made 30 saves for the Maple Leafs, who went 0-4 on their four-game road trip and were outscored 12-1, including being shut out three times. The Maple Leafs are 1-7 in January.

"It's frustrating," Bernier said. "We go back home after we score one goal and get no points. I know I have got to be better and make that extra save that keeps us in the game."

Toronto got the jump on the Blues, outshooting them 15-6 at the start. But the Blues got the first goal when Shattenkirk got the puck on the right boards, walked into the right circle and beat Bernier with a backhander at 16:40 of the first period.

"There were some positive things in the first period before they scored that goal," said Toronto interim head coach Peter Horachek. "We are a team that has to be at our strongest now. We're going to have to be mentally tougher."

It stayed 1-0 until Steen beat Bernier with another backhander from in front 1:38 into the third period.

"He's extremely patient as a goalie, and doesn't really bite on a lot of stuff," said Steen, who waited out Bernier and then lifted the puck over him. "I was just trying to wait as long as I could."

Steen then set up Oshie on a 2-on-1 with 5 minutes left for the final margin.

NOTES: Defenceman Roman Polak, who spent eight seasons with the Blues before being traded to Toronto for fellow defenceman Carl Gunnarsson in the off-season, returned to St. Louis for the first time and received a big ovation when announced as a starter before the game. ... The Blues' line of Steen, Backes and Oshie has 49 points in the past 11 games. ... Toronto's Phil Kessel played in his 410th straight game, which is the fifth-longest current streak. ... St. Louis is 11-0-1 since Jaden Schwartz returned to the lineup.