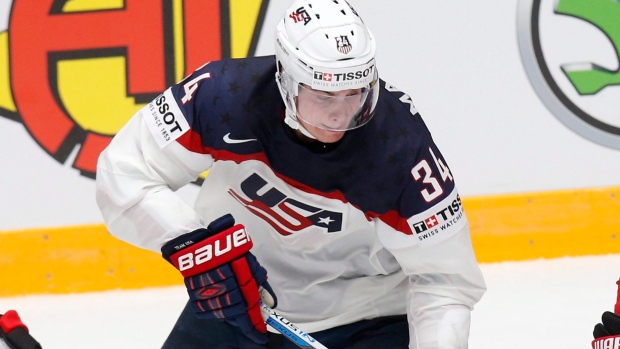 The Stanley Cup Playoffs have reached the Conference Finals, meaning the selection order in the first round of the entry draft for spots one through 26 is officially locked in. That gives us more than enough information to jump into mock draft season.

As we proceed to the debate and discussion part of the mock season, keep in mind that things remain fluid as teams continue to gather information and work through the process of identifying which players are the best fit for their organizations.

A few general thoughts on the first round:

- The Toronto Maple Leafs have selected two players who developed into No. 1 centres in the history of the draft: Darryl Sittler (1970) and Vincent Damphousse (1986). The last time the Leafs had a true first-line centre in uniform was in 2008 when Mats Sundin was wearing the number 13 blue and white sweater. So when you win the lottery and there is a potential No. 1 centre available, you run to the podium to announce Auston Matthews as the first selection in the 2016 NHL Entry Draft. Position matters, but the fact is Matthews is the best player available in this draft. He’s a complete, elite centre who doesn’t take a back seat to any player in this draft class in any area of skill. When you are building a team, you couldn’t ask for more than what you are getting with Matthews.

- It makes sense for the Jets to pick the new Finnish Flash, so why not have the original, Teemu Selanne, on stage to hand the jersey to Patrik Laine? He offers the skill and size that every team wants to add. An elite offensive player with the ability to score in multiple ways, Laine can do it with a panache, flair and confidence not often seen by players this young.

Ferraro: Matthews performance at Worlds has sealed him as first overall pick

- Columbus GM Jarmo Kekalainen may want a centre, but winger Jesse Puljujarvi is no consolation prize. He plays with a drive and purpose that propels high-end skill to the forefront of the game. He’s well rounded and capable of playing in all situations of the game. Like Laine, he combines the skill and size that all NHL teams desire. Moving up a single spot in the draft lottery was a big win for the Blue Jackets, who can add a top-end player ready to step right into their lineup.

- If you don’t draft quality defencemen it is incredibly difficult to acquire them in today’s NHL. Look around the league at the homegrown blueliners and you’ll see why finding them in the draft is so important. While there will be a number of very good forwards available, defenceman Olli Juolevi of the London Knights makes significant sense for the defensively challenged Edmonton Oilers with the fourth pick. Olli is a sublime talent who makes plays in every area of the game and fits a big need on the Edmonton blueline.

- The Vancouver Canucks are transitioning to a younger team, so there is opportunity for young players to make their mark. Pierre-Luc Dubois of the Cape Breton Screaming Eagles is a blend of skill and power who reminds me of Dallas Stars captain Jamie Benn. Dubois is smart, can create or finish, and is comfortable playing in the hard and challenging areas.

Button: Laine not even close to Matthews

TSN Director of Scouting Craig Button joins Game Day to chat about the conference finals of the NHL playoffs and assesses Auston Matthews' play at the World Hockey Championships.

- Matthew Tkachuk is best described as a mix of brains, brawn and a whole lot of skill. He’s a perfect blend for the Calgary Flames to go after with the sixth pick. It’s natural to want to compare Tkachuk to his father, Keith, but Calgary fans might be see a lot of Gary Roberts in the London Knights winger.

- Montreal is crying out for a big centre and Logan Brown of the Windsor Spitfires fits the description perfectly. He has a game that is reminiscent of Joe Thornton’s. His progress over the past three years has been impressive and he is a player with a lot of growth ahead.

- Everybody loves what Chicago Blackhawks captain Jonathan Toews does to help a team win. Tyson Jost of the Penticton Vees plays with the same determination and purpose. His combination of skill and will makes the players around him better. I’ve got the Ottawa Senators taking the North Dakota centre with pick 12.

- Winnipeg has an additional first-round pick acquired from Chicago in the Andrew Ladd trade. The Jets do a terrific job of adding players of all types and positions that keep their prospect cupboard well stocked. German Rubtsov was unable to participate in the IIHF Under ’18 tourney because of doping scandal in Russia. Rubtsov is a tireless, skilled competitor. While he may have been out of sight at the tournament, nothing escapes the eyes of the Jets’ scouting staff.

- Toronto will be picking in the last four sections of the first round, with the exact spot to be determined by what the Pittsburgh Penguins do during the reminder of the playoffs. This pick was acquired in the Phil Kessel trade during the 2015 off-season. The Leafs have a number of forward prospects, so it makes sense to focus on adding defence. Cam Dineen of the North Bay Battalion is a player who may have been unknown coming into the season, but that is no longer the case. He has exceptional sense and feel for the game, and a poise that allows him to remain calm under pressure. You won’t see highlight-reel plays from Dineen, but those forwards are going to love the way he puts the puck on their sticks.

We want feedback on who you think would be a good selection for your favourite team, so use #TSNMock2016 on Twitter to tell us who should be going where in the first round.

NOTE: The last four selections will be determined after the Conference Finals and Stanley Cup Final and in this case they are listed in reverse order from their regular season finish.