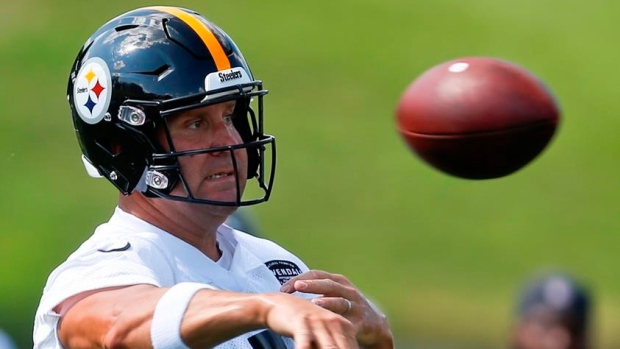 The 36-year-old indicated that he's in the best shape of his career Thursday following the team's first training camp practice at St. Vincent College.

A leaner, trimmer Roethlisberger hopes the additional off-season work can play a part in helping the Steelers to another championship.

"Anything you can do to lighten the load on your knees and ankles, I think is important," said Roethlisberger, who worked with a personal trainer and nutritionist to cut sugar and carbohydrates from his diet to get him ready for his 15th season.

"The knees, the ankles, being lighter ... those are all positives when it comes to this age, playing football and a sport where you're pounding on your knees and you've had a couple knee surgeries."

It could be his last chance to win a championship with two-time All-Pro running back Le'Veon Bell.

Bell is away from the team after he and the Steelers failed to reach an agreement on a contract extension earlier this month, meaning he will play under the $14.5 million franchise tag for the second straight year.

Bell skipped training camp last year and signed his franchise tender less than a week before the start of the season. He is expected to follow the same plan and then play what could be his final season in Pittsburgh.

"I don't know what's going on with his agents and how this whole thing works, so I'm not sure what's going to happen," Roethlisberger said.

Nobody's sure when Bell will show up either. Until then, former Pitt star running back James Conner, rookie fifth-round pick Jaylen Samuels and veterans Stevan Ridley and Fitzgerald Toussaint will carry the load.

"Le'Veon is one of the best, if not the best in the business," Roethlisberger said. "We miss him as a teammate, but I look at it as an awesome opportunity for the other guys."

Roethlisberger, whose contract expires in the spring of 2020, is excited about the offensive line in front of him and the Steelers' skill players at running back and wide receiver, led by Bell and four-time All-Pro Antonio Brown.

"I really like where this team is at," Roethlisberger said. "If I didn't have a good feeling about this team, it probably wouldn't be as exciting, but I am excited about this group."

He led the team to a 13-3 regular season last season, which included a second straight AFC North title and third in four years. But the Steelers were upset by Jacksonville at home during the divisional round in the playoffs.

Steelers coach Mike Tomlin said it's reasonable to expect another big season from Roethlisberger after his renewed off-season conditioning focus.

"Regardless of position, we always say physical conditioning precedes anything else," Tomlin said. "When a guy shows up in great shape, that's oftentimes a springboard for big-time play."

While Roethlisberger hopes the additional work can prolong his career, he also reiterated that he's only focused on this season.

This season, he will work with former quarterbacks coach Randy Fichtner, who has taken over the play-calling duties after Haley's deal wasn't renewed in January. Roethlisberger said Fichtner hasn't changed much offensively.

As long as it leads to a Super Bowl title, that's all that matters to Roethlisberger.

"If you win more than you lose, that's important, but winning those games can lead to Super Bowl opportunities, so that's always our ultimate goal," Roethlisberger said. "There's 31 other teams doing the same thing. That needs to be our singular focus."