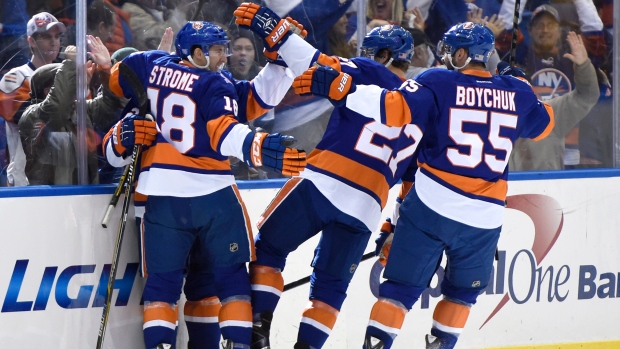 UNIONDALE, N.Y. - Returning from a five-game road trip, the New York Islanders made defence a priority against the Colorado Avalanche. Scoring six goals was a bonus.

Nick Leddy and Anders Lee scored early and Jaroslav Halak stopped 20 shots for his second straight shutout as the Islanders routed the Avalanche 6-0 Tuesday night for their fourth straight win.

Travis Hamonic, Nikolay Kulemin, Casey Cizikas and Ryan Strome also scored to help the Islanders get their first home win since Oct. 25. New York extended its shutout streak to 181:11 and has allowed just three goals in the last four games.

"This was probably our most complete game this season," Hamonic said. "We want to be as strong at home as we've been on the road. Now we have to work on playing even better."

Leddy opened the scoring at 1:33 on a shot from the left point, and Lee added a power-play goal at 5:21 from in close for his second of the season.

Avalanche goalie Semyon Varlamov finished with 40 saves as Colorado was outshot 13-5 in the first period, 15-8 in the second and 18-7 in the third.

Hamonic made it 3-0 at 6:38 of the second, the 10th goal scored by the Islanders' defenceman this season. They had 23 goals from blue liners all of last season.

Kulemin extended the lead to 4-0 with a short-handed goal at 11:32 on a pass from Frans Nielsen.

Cizikas and Strome each scored their first of the season in the third period.

"This was a blueprint for how we have to play," said Strome. "We have a lot to be proud of tonight. Getting almost 50 shots is really impressive."

The Islanders came in with a three-game winning streak to finish a five-game road trip that began with a 5-0 loss at Colorado on Oct. 30.

After losing again at San Jose to extend their skid to three games, they had one-goal victories over Anaheim, Los Angeles and Arizona.

"We're creating good habits," Islanders coach Jack Capuano said. "Our attention to detail was really good. I was impressed that we stayed with it all night."

The Islanders, who improved to 10-5-0, didn't get their 10th win last season until late December. They finished the night one point behind the Pittsburgh Penguins for the Metropolitan Division lead.

Colorado is moving in the opposite direction since last playing the Islanders with just one win in six games.

"It's beyond frustrating at this point," Avalanche centre Matt Duchene said. "We're taking way too many penalties and we're not being smart with the puck."

The Avalanche came in rested having last played Saturday, when they lost 4-3 at Philadelphia.

Colorado has struggled this season after tying their franchise record last year with 52 wins and finishing with 112 points.

"We have to play smarter," Duchene added.

The last goal scored against them was by Dwight King of Los Angeles at 3:49 of the first period last Friday.

"When we do the right things defensively, we give ourselves a chance," Capuano said. "We have to sustain success shift-by-shift and period-by-period."

NOTES: The Islanders are 8-1-0 when they score at least three goals. ... Colorado scratched C Daniel Briere and D Brad Stuart while the Islanders scratched D Brian Strait and D Matt Donovan along with F Eric Boulton.