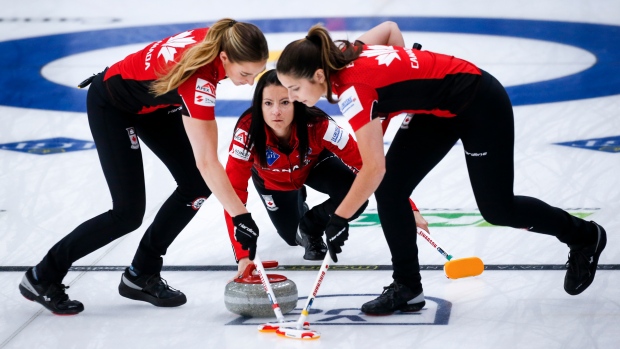 The Canadians remain in the mix with a 6-6 record, holding down the sixth and final playoff spot. Team Einarson needs to make the playoffs at the women's curling worlds in order to qualify Canada directly for the 2022 Winter Olympics in Beijing, China.

Canada has one more matchup against China left on their schedule.

Due to multiple COVID-19 cases within the broadcast crew, games will not be televised until Friday afternoon at the earliest. As a result, follow the end by end action with TSN.ca's LIVE curling blog.

Japan makes the hit and takes the win 6-5.

Japan makes the hit for the win. pic.twitter.com/lXs2rhoHnA

Canada makes an open hit for two. Japan leads 6-5 and has the hammer heading into the 10th end.

Canada makes the hit for the deuce. Japan with a 6-5 leads and the hammer in end 10. Time to put our steal pants on! Let's go, Team Canada! pic.twitter.com/xWC1Hr2r2H

Japan completes a well-executed raise and scores two to extend their lead to 6-3 after the eighth end.

Well-executed raise by Japan for the deuce. 🇯🇵 with a 6-3 lead after 8 ends. pic.twitter.com/jUtiIEjpmE

Canada has the chance to draw to half of the 4ft for a deuce. The shot is heavy but Canada still end up with a single point to make it 4-3 Japan heading into the eighth end.

It's heavy, so it's a single point for Canada. Japan leads 4-3 with the hammer heading into end 8. pic.twitter.com/e4eHZENhWG

Canada was a couple of feet heavy with their last shot, allowing Japan to play the nose hit for two and take a 4-2 lead after six ends.

Japan makes it and takes a 4-2 lead after 6 ends. Let's go, Canada!! pic.twitter.com/5DikJDNAIw

Japan peels out to blank the fifth end. 2-2 heading into the break! pic.twitter.com/6BvQP5eRri

Japan noses, leaving an open hit and a deuce for Canada, who tie it up at 2-2 after four ends.

Those are the words you love to hear when making a shot for the deuce! All tied up 2-2 after 4 ends.

Canada draws in to give up a steal of one, giving Japan a 2-0 lead after three ends.

As good as they could do! Canada draws in to give up a steal of 1. Japan leads 2-0 after 3 ends. pic.twitter.com/ZqZVzERjPP

Canada had the opportunity to pick up three points with a double but failed ot capitalize, leaving Japan with a steal of one.

Worth the risk, but it’s a steal of 1 for Japan. 1-0 🇯🇵 after two ends. pic.twitter.com/zlotGFduwi

Canada throws through for the blank and keeps the hammer for the second end.

Canada throws through for the blank. Taking the hammer into end 2! pic.twitter.com/vIBqjnSMe8