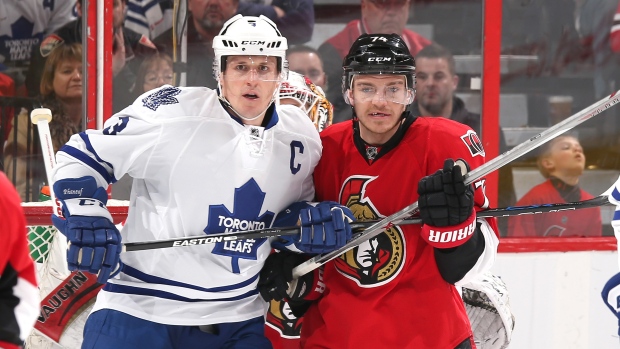 The Toronto Maple Leafs traded veteran defenceman and captain Dion Phaneuf to the Ottawa Senators on Tuesday in a nine-player deal.

No salary will be retained by either team over the trade’s entirety.

"This was a transaction that certainly wasn't for today," Leafs general manager Lou Lamoriello said.

Phaneuf, 30, has three goals and 24 points assists in 51 games with the Leafs this season. He has five years remaining on a seven-year contract he signed two seasons ago worth an average annual value of $7 million.

"He's been in a tough environment. He's been judged very tough in the environment he's in."

Originally selected ninth overall by the Calgary Flames in 2003, Phaneuf has scored 120 goals and 424 points in 801 career games with the Flames and Maple Leafs.

Toronto acquired Phaneuf from Calgary in a seven-player blockbuster in January of 2010 and he was named the 18th captain in franchise history prior to the 2010-11 season.

Michalek has appeared in 32 games this season for the Senators and has six goals and four assists along with 12 penalty minutes and a plus-1 rating.

He was drafted in the first round, sixth overall in the 2003 NHL Entry Draft by the San Jose Sharks.

Cowen, 25, has played 37 games for the Senators this season and has four assists and a plus-7 rating.