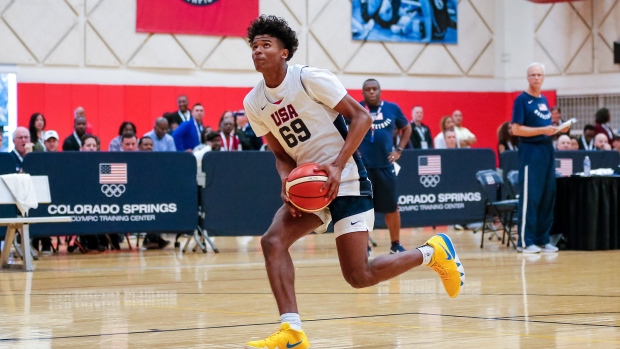 Top 2021 NBA Draft prospect Jalen Green took a potentially monumental step when he agreed earlier this week to join the G-League next season instead of committing to play at least one season at a major college or university.

Green, who is ranked No. 1 on ESPN’s list of basketball recruits, is reportedly set to receive approximately $500,000 and a $125,000 scholarship should he decide to attend college or university at some point. Green is also free to pursue endorsement deals, which he would not have been able to do under NCAA rules.

"Well, I think a lot of these young guys are realizing look man, if I can make some money now, I’d rather do that than fake it in the college route. I’d rather improve my game for a year and not have to go to class. So I think with Jalen Green he didn’t want to go overseas, he did seriously consider Memphis but the package that the G-League has been trying to get some of these young guys to take finally was too much to turn down,” Spears told Grey.

“I think he’s going to get close to half a million. He can get endorsements, he’s promised a $125,000 scholarship when he decides to go to college and the ability to work with NBA-calibre coaches, visit teams, just be around in an NBA environment for a year before he enters the draft.”

It wasn’t just Green who decided to go the G-League route. It was announced Friday that Isaiah Todd, a 6-foot-9 power forward from Richmond, VA., had signed to play in the G-League for the coming season. Todd was ranked as the 13th best recruit by ESPN.
According to Spears, if all goes well, this could be the beginning of a trend for top-flight high school stars.

“It’ll be interesting to see if this affects a potential straight to the NBA from high school possibility in 2022 if this goes well. Maybe the NBA won’t want to change the rule. This has been in place for years in terms of the money. The money just went up which made it more attractive.

And so that’s why I think Jalen Green and his family, their moves have been brilliant. They were the first ones to really seriously consider it. I know last year [LaMelo] Ball and [R.J]. Hampton considered it before they went overseas. But I knew somebody was going to bite at some point,” he said.

But it won’t be just any player with their eyes on the NBA. As enticing as attracting the best young talent in the world is for the G-League, Spears says they’re only going to shell out top dollar for the best of the best.

“Keep in mind though this is the elite of the elite of the elite. Kenyon Martin Jr., whose dad was obviously an NBA star, he wanted to do this last year and was turned down. So they’re not just taking everybody. You’ve got to be like a probably lottery potential guy right now in order for them to offer you all this money.”

Players ranked No. 2 to No. 5 on ESPN’s list – Evan Mobley, Cade Cunningham, Scottie Barnes and Jalen Suggs, respectively – have all committed to major NCAA schools.

“I wish I was in Kentucky’s and Duke’s and Kansas’ offices yesterday. I know they’re mad because I think if the NCAA would just given these programs the ability to at least – in all sports – let the players get endorsement deals. Then all this issue of whether they should get paid or not would be solved. But now, I think college basketball is going back to it was when LeBron came out. Where they’re going to miss the elite guys. And there are going to be some misses. Everybody that goes to this G-League thing isn’t going to pan out. But in the end I think it’s to college basketball, the NCAA’s greed, that’s going to end up biting them and keeping them from, you know, having more stars that we’ve been used to seeing.”