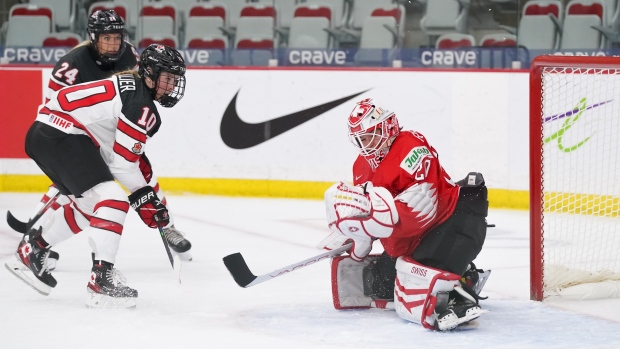 CALGARY — Natalie Spooner is warming to her job of creating havoc in front of the opposition's net to generate scoring chances from close range.

The 30-year-old from Toronto scored two goals tipping in teammates' shots in Canada's 5-0 win over Switzerland in the women's world hockey championship Tuesday.

"The longer your career goes, you always kind of have to evolve as a player to maintain and stay at this level," Spooner said.

"If you look back at my game, oh, eight to 10 years ago, I definitely was a much different player. Probably tried to take people on one on one way more."

"I've kind of found the parts of my game where I do have a lot of success, and really honed in on those."

Spooner admires the work of Toronto Maple Leafs forward Wayne Simmonds in a similar role, and the way Leon Draisaitl of the Edmonton Oilers creates room for himself in the offensive zone.

"I've watched quite a few Wayne Simmonds clips with the Leafs. He was kind of a net-front guy," Spooner said. "I love the way Leon Draisaitl plays.

"I wouldn't say he's quite a net-front guy, but just using his big body."

Melodie Daoust had a goal and two assists, Emily Clark scored shorthanded and Jamie Bourbonnais rounded out the offence for Canada at WinSport's Markin MacPhail Centre in Calgary.

Canadian captain Marie-Philip Poulin blocked a shot with her upper chest in the third period and skated to the bench bent over in pain.

She didn't return to the game, but apparently avoided serious injury, according to Hockey Canada.

"A little bit of a scary situation in the game. I'm happy to say Marie-Philip is doing very well," said director of women's national team Gina Kingsbury following the game.

"We're going to continue to assess her and make sure she continues to do well."

Emerance Maschmeyer posted a 12-save shutout in her first start of the tournament. Daoust and Spooner lead Canada in tournament points with five apiece.

Switzerland's Andrea Braendli, who tends goal for Ohio State, had 41 saves in the loss. Braendli was replaced early in the third period by Saskia Maurer, who stopped 17 shots.

Canada (3-0) concludes the preliminary round in Pool A on Thursday against defending champion United States, which is also 3-0 and has yet to give up a goal in the tournament.

The quarterfinals are Saturday followed by the semifinals Monday and the medal games Tuesday.

Switzerland was minus top forward Alina Muller on Tuesday.

Muller led the 2018 Olympic women's hockey tournament in scoring with seven goals and three assists in six games and was named best forward of that tournament.

She suffered a leg injury in the second period of Saturday's 3-1 loss to Russia and didn't finish the game.

The Swiss have scored once in three tournament games. Switzerland's power-play went 0 for 6 against Canada and couldn't convert a two-man advantage in the third into a goal.

"We really tried actually to change our power play . . . getting people in front of the net and shots from outside just to try to create some confusion in front and jump on rebounds or screens," said coach Colin Muller, who is from Toronto.

"That was our game plan today. We sort of didn't follow it too well. We weren't moving the puck quick enough. I thought we played a really good first 10 minutes or 15 minutes of the game.

"The longer the game went on, the speed and the strength of the Canadians, it sort of takes over after a while."

Poulin took a hard shot to the chest while the Canadians were killing off Switzerland's two-man advantage in the third.

Spooner redirected an Emma Shelton shot at 1:01 of the third for Canada's fifth goal.

Maschmeyer stopped Swiss captain Lara Stalder on a breakaway in the final minute of the second period.

Daoust tapped in an airborne puck off an Erin Ambrose shot from the point at 16:34.

Spooner deflected a Renata Fast shot by Braendli at 9:55 just 17 seconds after Bourbonnais scored on a rebound.

Clark scored shorthanded at 4:04 of the second period pouncing on a rebound following a Blayre Turnbull solo effort.

Canada has yet to score in the first period, and score a power-play goal in the tournament.

He won't continue with the Canadian women after the world championship to February's Winter Olympics.

"It's a great opportunity for him and the Rangers are lucky to get him," Canada coach Troy Ryan said. "Right now, the world championship is our focus.

"We'll have some discussions with management in Hockey Canada, and some decisions will be made here in the near future."

Goalie Ann-Renee Desbiens, assistant captain Brianne Jenner and defender Emma Maltais were given the day off.

This report by The Canadian Press was first published Aug. 24, 2021.