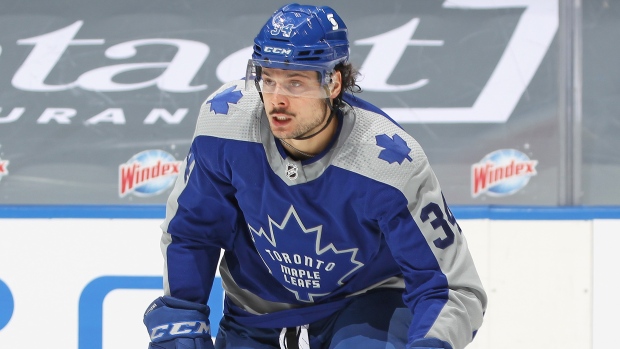 The longest point drought Auston Matthews experienced this year was three games. It happened just once, in early March, after he returned from a wrist injury. The Leafs centre was a model of consistency during an explosive regular season, which saw him lead the NHL with 41 goals.

So, you can understand why Matthews is eager to get back to work and stay in a rhythm. For now, though, he and the rest of the Leafs can only watch the Stanley Cup playoffs.

"It kind of gets you anxious to get going," Matthews admitted. "It's Monday and we still got three more days until we're playing. I don't mind watching, but sometimes when you're watching you really just want to be out there and it kind [of] sucks sitting around."

The Leafs and Canadiens won't play until Thursday, making it the last series to get underway.

Toronto has made the playoffs in all five seasons since drafting Matthews first overall in 2016, but the team has not won a series in that time.

"Everybody in this locker room is extremely motivated," Matthews said. "Whether it's from last year, disappointments over the last couple years, there should be no shortage of guys in this room who are extremely motivated to make a difference and fight through it."

Matthews will have to fight through a big, physical Montreal blue line. The Canadiens led the NHL in hits and will do everything they can to disrupt Toronto's top line of Matthews, Mitch Marner and Zach Hyman.

"We need to move our feet and shoot the puck and try to get to the net," Matthews said. "Those things will be important. They're pretty big and like to be physical and keep you away from the net so we got to make sure we're battling for positioning and getting there and making it hard for their goalie."

Up front, the Canadiens will try and get Phillip Danault and Brendan Gallagher out against Matthews as much as possible.

"They play really well in all three zones and they make it difficult," Matthews said. "They don't really turn pucks over. They work extremely hard so you got to make sure you're in good positions all over the ice."

Danault  played 73 minutes and 38 seconds against Matthews at five-on-five this season with the Habs outshooting the Leafs 77-62 in that time. The Leafs did own a 3-2 edge in goals.

"He's solid," Matthews said. "He does everything really well on both sides of the puck. He's good in the faceoff circle. A pretty underrated guy, in my opinion, as far two-way centres go in the NHL. He's a really, really solid player."

Matthews recorded a point in all 10 games against the Canadiens this season, finishing with seven goals and seven assists. Overall, Matthews has 19 goals and 31 points in 24 career games against Montreal. This is, clearly, a rivalry he relishes.

"It's kind of like RedSox-Yankees," the Arizona native said. "Two fan bases and organizations with rich histories in this league over the last 100-plus years so it's pretty incredible."

How will the Leafs handle things if the Canadiens try and turn this series into an ultra-physical affair with some nastiness mixed in?

"Just keep playing and play through it," said coach Sheldon Keefe. "We have to be physical ourselves. Playoff hockey demands that. Montreal is right up there with the most physical teams in the NHL ... We played against them 10 times. It is not entirely new for us. We know what to expect. At the same time, playoffs are going to bring out a higher level of physicality to everybody, including ourselves, and we are more than prepared for that."

"We got to be ready for a physical series, no matter what," said defenceman Jake Muzzin. "And I think we need to be more physical. But, we got to stay composed and play our game. We can't get off track and try to run around and do all this crazy stuff."

Toronto is better suited for the playoff grind this year having added Wayne Simmonds, Joe Thornton and Zach Bogosian in the off-season and Nick Foligno at the trade deadline.

"It's a little more well-rounded," said Muzzin of his team. "We brought in some guys who are a little grittier, some veteran guys who have been around and seen some stuff, and the young guys have learned."

After returning to practice in a red no-contact sweater on Sunday, Bogosian skated in a regular sweater on Monday.

"A positive step," said Keefe. "We have a day off tomorrow and then another practice day. It will be part of his progression. He is not quite there yet, from what I am told, but obviously the more reps he gets, he is going to get even closer. We are certainly expecting him to be available in this series."

Bogosian, who has been sidelined since sustaining a shoulder injury on April 20, led all Leafs defencemen in hits per 60 minutes this season and was a steadying presence on the third pair and penalty kill.

"He's going to come in and be a big, physical guy for us with box outs [and being] strong in the corners and on guys," noted Muzzin. "He's a good leader in the room."

Bogosian has been medically cleared. Leafs blueline is in good shape health wise.

For the first time since being traded to Toronto, Riley Nash spoke to the media. The 32-year-old centre has been sidelined with a knee sprain since April 4 and will be making his Leafs debut in the playoffs.

"Definitely unique," he said of the situation. "I'm just trying to get acclimated as fast as possible."

Nash has been skating on the third line with Alex Kerfoot and Ilya Mikheyev.

Toronto's style of play is much different than what Nash was used to in Columbus.

"They make a lot of possession plays," Nash said. "Coming out of their own zone, the D do a really good job of beating the forecheck, skating through pressure, finding the guy available whether it be the low centre or winger. Coming through the neutral zone, our team in Columbus did a lot of dump and chase or chip and chase and tip it in and go get it and it seems like they make a lot more possession plays here whether it be changing sides through the neutral zone or trying to find lanes, chipping it to speed. It seems like they always have two or three guys close in support and ready for the puck at all times. Definitely going to be a little bit weird and not as natural to begin with."

Nash has been on the team that eliminated the Leafs in two of the last three seasons, but says the experiences with Boston in 2018 and Columbus in 2020 were quite different.

"From the series with Boston to last year, they were a lot harder compete-wise," Nash observed. "I thought their top guys were pretty darn good last year."

Nash pointed out that the Jackets benefited from a shorter best-of-five format in the bubble last summer while the Leafs were still trying to get up to speed.

"This year, it seems like the team is firing on almost all cylinders and has that momentum going into the playoffs and knows where their game's at rather than trying to find it in a quick five-game series," Nash said.

Defenceman Ben Hutton has been absent from the last two practices.

"He has a non-COVID medical situation that our staff is monitoring," Keefe said. "It's not hockey related. That is all I have for now. He is going to be off the ice for the next little bit here before he goes through more testing."

Acquired at the trade deadline from Anaheim, Hutton has played four games with the Leafs.