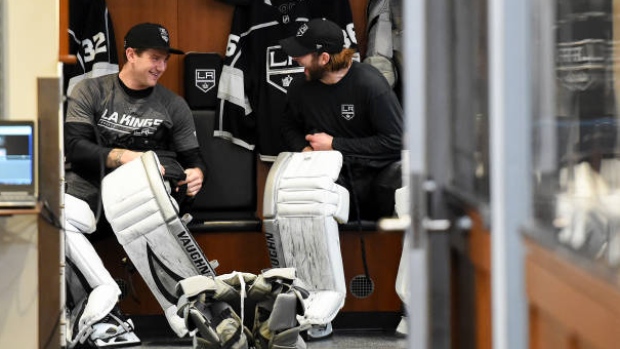 For the first time since being traded on Feb. 6, 2020, Jack Campbell will play against his old team when the Los Angeles Kings visit Scotiabank Arena on Monday.

"Credit L.A. a lot for helping me out so much," the 29-year-old goalie said. "A lot of great friends over there and really appreciate that organization so much."

A first round pick by the Dallas Stars in 2010, Campbell struggled to find his way early on in his professional career. He got back on track after joining the Kings organization during the 2016-17 season. Campbell was mentored by two time Stanley Cup champion Jonathan Quick.

"That guy means the world to me," Campbell said. "I used to watch video of him in Dallas, just studying his game, and I went to Connecticut one summer to train just because he was out there. That was before I ever met him. Just the ultimate teammate, ultimate guy to look up to and we still are boys. We text each other a lot and I can't say enough good things about Quickie. He's a legend and it'd be pretty awesome to play him."

Campbell is also anticipating a reunion with Anze Kopitar, who leads the Kings with seven goals this season.

"When I was new there, he really took me under his wing," Campbell recalled. "I spent a lot of time with him at his house. He's got a beautiful family and is super friendly. We had a lot of great times together."

Alex Iafallo is another good friend Campbell is eager to reconnect with.

"Last time I was with him I think we were boogie boarding in the Pacific Ocean so it will be fun to get on the ice and battle."

"Snorkelling is my favourite [thing to do] in the off-season," the Michigan native said. "Just makes you feel really happy."

During the hockey season, Campbell's happy place is the arena.

"The nicest dude I've ever met," said Joseph Woll, who dressed as Toronto's back-up goalie on Saturday. "His positivity and his love to come to the rink every day is contagious. It's really hard to look at the guy and not smile."

But, early in his career, Campbell would get too down on himself after losses. Managing those emotions better has allowed him to take the next step.

"Everybody has a tough period or something, but it's just shutting the door and trying to be there for the guys," Campbell said. "They're always there for me."

During last year's COVID-shortened season, Campbell emerged as Toronto's go-to guy. Now, he's determined to prove he can run with the starter's job all year. The early returns are promising. Campbell stopped 42 of 44 shots in a win against the Bruins on Saturday night to improve to 6-2-1 with a .936 save percentage.

Campbell prefers to keep the finer details of his turnaround private only saying it's been a trial-and-error process.

"I've found ways of improving [my mental game] and I'll help the boys out if they ever ask, but we'll keep that between us," he said. "Sorry."

Campbell has appeared in 10 of Toronto's 12 games this season and the team will lean on him even more moving forward, because Petr Mrazek is out approximately four weeks after aggravating a groin injury.

Mrazek initially sustained the injury in his first start of the season on Oct. 14 in Ottawa. He returned to game action on Oct. 30. The 29-year-old Czeczh native then tweaked something a few days later in practice.

"Petr, himself, was saying for a number of days in advance of when he actually played that he was more than ready," Keefe pointed out. "He was really feeling good and we pushed him back to give him more time. He was absolutely certain, as was the medical team, and everything checked out, but it's just the nature of these injuries and playing the position that these things are always a risk."

If Mrazek does indeed miss four weeks that would take him out of the equation for up to 14 games.

"We like the idea of having the tandem and guys that can work together and we can share that workload a little bit better," Keefe acknowledged, "but, at the same time, Jack's in a groove right now. He's rolling. It's a positive for him that he can just keep at it and knows he'll be playing every day."

Campbell did some work with goalie coach Steve Briere before practice on Sunday, but didn't stay out for the main session. It's been a familiar pattern so far this season as the team manages his workload.

"He feels good in terms of what we're asking of him in practices," said Keefe. "He's staying sharp, but at the same time not overdoing it ... The games are a big ask of him."

"I've learned that, as I've gotten older, you got to rest when it's time," Campbell said. "Coach has done a great job of balancing that workload for me. I appreciate everyone looking out for myself and my body."

The Leafs have a busy week ahead with games on Monday (Los Angeles), Wednesday (at Philadelphia), Friday (Calgary) and Saturday (at Buffalo). The team prefers not to start the same goalie on consecutive nights. So, who's in line to spell Campbell?

"I'm going to talk to [general manager] Kyle [Dubas] about that," said Keefe. "We have some time. Joe's here now. We think this is great experience for him. [Michael] Hutchinson was able to play a game last night [in the American Hockey League allowing three goals on 27 shots] … Erik Kallgren, by all accounts, stole a game for them out in Rochester on Friday night and was outstanding. We've got options there so we're going to talk about that and get it sorted."

Hutchinson lost his only start with the Leafs this season. Woll and Kallgren, an import from the Swedish Hockey League, have never played in the National Hockey League. Woll, the team's third round pick in 2016, is 2-1-0 with an .895 save percentage in the AHL this season.

"The past couple years have been a little weird with how COVID's been, but it's afforded me a lot of opportunity to work on some stuff that I don't think I would've paid a lot of attention to," the 23-year-old said. "Some struggles early in my pro career really allowed me to take a step back and see what I need to improve on the ice and off the ice and building that mental strength. I've done a lot of work on that ... it's been a long road and I feel ready [for the NHL]."

During warm-up on Saturday night, John Tavares shared a moment with wife Aryne and young sons Jace and Axton, who was born in January, along the glass.

"It means everything," the Leafs captain said of having his family in the building. "It just gives tremendous perspective. It was my youngest's first one so it was special in that way too."

Last year, due to the strict COVID protocols, family members could not attend games, which were played inside empty arenas in Canada.

"They felt a little bit more distant than normal," Tavares admitted. "Amazing to have them here and be a part of it and see what I get to do every day and what I enjoy."

Tavares put on a show for his family scoring two goals and adding an assist despite being matched up against the Patrice Bergeron line.

After the Leafs dropped a fourth straight game a couple weeks ago, Tavares said the team needed to be more consistent and he vowed to lead the way. He's been true to his word.

"John remains confident in himself and the group and that's so important when things aren't going well," said Keefe. "You got to keep the belief, not point fingers or question yourself and others, and just keep working and he's embodied that as our leader. It's not just him. It's consistent through our team, but the tone is set by your most experienced players and your leadership group and John leads the way."

Tavares has produced five goals and four assists during the current five game win streak. What stands out about his game right now?

Following a scary injury in last year's playoffs, the 31-year-old is back to playing at an elite level.

"I don't ever take it for granted," Tavares said. "Going through something like that only heightens it even more. So, every day you get to go out and compete in this league, at this level, and getting to be a Maple Leaf, is phenomenal. Just go out there and enjoy it and make the most of it."

Timothy Liljegren may be a rookie, but he hasn't looked like one so far this season. With, perhaps, one exception. The 22-year-old defenceman accidentally went into the penalty box on Saturday night after an altercation with Brad Marchand despite the fact no penalty had been called on him.

"I kind of interfered with him a little bit a couple seconds before and then we had a battle in front of the net," Liljegren said. "We cross-checked each other. I thought I had a penalty because the ref took me to the penalty box, but, I guess not ... I was kind of confused."

"I was telling our bench we were going to be on the power play," the coach said. "Just the way the arm went up, I saw Marchand might have got away with a couple before that and the ref kind of had just seen enough sort of thing. The whole ruckus in front of the net maybe threw Timothy off a little bit. And, of course, it's always tough when the linesman grabs you by the arm and escorts you there."

It was notable that Liljegren stood his ground against the pesky Bruins winger and drew the penalty.

"I don't really get agitated that way so I try and stay calm and obviously it worked," he said. "Just my personality, I guess."

"He played some shifts against one of the best lines in hockey in the Bergeron line," noted Keefe. "He did a great job. He just looked confident. He did a good job on the penalty kill. We have seen a good stretch of play from him."

Liljegren will play a fifth straight game on Monday.

"He's got a lot of poise back there," observed Auston Matthews. "Maybe not as flashy [as others], but he's really deceptive with the puck and skates well. Him and [partner Rasmus Sandin] really read well off each other with that chemistry they have. They're really good friends off the ice so I'm sure that leads into their on-ice play."

"We talk a lot on the bench in Swedish," Liljegren said, "so I think that helps. But also just the experience from playing with him with the Marlies helps."

Unlike Marchand, Sandin actually knows how to get under Liljegren's skin.

"He knows what buttons to push," Liljegren said with a smile. "He doesn't do it very often so that's good."

Matthews says the Sandin-Liljegren chemistry is most evident in the offensive zone.

"They're able to move around and make really good plays with the puck," the reigning Rocket Richard Trophy winner said.

"We just try and keep moving our feet and don't be standing still with the puck," Liljegren said. "Obviously, when you play with guys like [Matthews] they get open a lot and it makes it easier to make a play."

T.J. Brodie (maintenance) missed practice, but is expected to play on Monday.