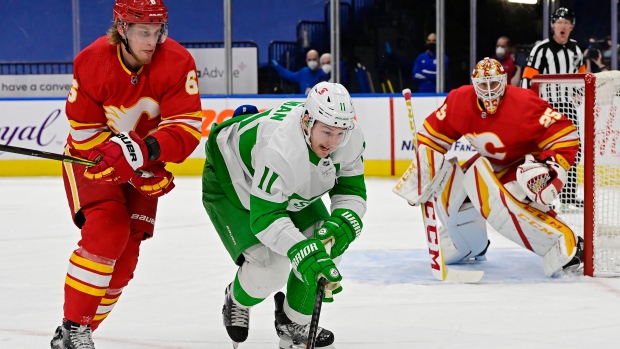 TSN Toronto Reporter Mark Masters reports on the Maple Leafs, who held a skills practice on Monday at the Ford Performance Centre ahead of Thursday night’s game against the Ottawa Senators.

Gritty winger Zach Hyman scored in the second period on Saturday night against the Calgary Flames to give Toronto its first multi-goal lead since March 3 when they completed a sweep of the Edmonton Oilers. For a Leafs team looking for a slump-busting win, it seemed to be a moment of catharsis.

"I had some speed on the defender [Juuso Valimaki] so tried to take it wide on him and when I couldn't take it to the net I used the back of the net to create a buffer," Hyman said. "When I came around I just wanted to get it on net, get it up high. I got it on net and then my momentum carried me to the bench."

Hyman snuck the puck past Flames goalie David Rittich, who has been a thorn in Toronto's side this season with a .962 save percentage in three games against the Leafs.

Hyman and Wayne Simmonds, two of the guys who bring the most energy on a night-to-night basis, then slapped gloves with authority.

"Simmer was there and it was fun to celebrate with him," Hyman said. "You don't often get to celebrate with the bench, but that was kind of a play where my momentum carried me to the blueline and in the second period the bench is right there."

Everyone was all smiles even William Nylander, who was standing beside Simmonds with his hand up waiting for a high five that never came.

"I was like this," Nylander said with a chuckle while raising his hand to recreate the moment. "Whatever. I was fired up. It was a great goal. He took it to the net and curled up and scored a big goal for us. We needed that win and that made it even harder for Calgary to push back. Next time I'll let him know that I'm there for a high five so he'll give it to me."

The way things are going, Nylander should have plenty more chances to celebrate with his old Marlies teammate. Hyman is now up to seven goals in the last 11 games.

"He's a guy who competes every night," said defenceman Morgan Rielly. "That's what his career's been based around. That's extremely valuable and his teammates really notice that. He and Wayne had their high five and it's a cool little moment. He's a guy that teammates can rally around because of his work ethic and how he plays."

"He works so hard," said Jack Campbell, who posted a 31-save shutout. "I think everybody in the world knows that. He led again with his work ethic and got rewarded on the scoreboard."

Hyman has bounced around the lineup while providing the same consistent effort. On Saturday, he started with Pierre Engvall and Ilya Mikheyev and finished with a game-high six shots.

"He's been great," said Engvall. "So hard on the puck and the way he skates with it makes it hard for the opponent."

Sheldon Keefe, who challenged Hyman to carry the puck more this season, considered putting the 28-year-old back with Auston Matthews and Mitch Marner on the top line prior to puck drop.

"I thought about putting Hyman back in that spot, but really liked the ability to have him playing lower in the lineup and just what that does for our depth," the coach explained.

"Listen, we have so many great players," Hyman said, "and I'm used to playing with almost everyone. It's nice to get moved around and play with different guys. We had all four lines rolling and everyone was contributing."

With Hyman's goal providing some insurance, the Leafs played confidently down the stretch earning their first regulation win since March 3 in Edmonton.

"We were playing with a lot more urgency," Hyman said. "We were blocking more shots, getting in lanes and just making it hard on their guys to get quality chances on the inside. Just a great team win."

In explaining Saturday's line shuffling, Keefe said he wanted to keep Alex Galchenyuk with John Tavares and Nylander. He felt that trio had performed well the night before.

Galchenyuk, acquired in a trade with Carolina on Feb. 15, rewarded that faith by picking up the secondary assist on Hyman’s goal.

"Great play in the neutral zone by Gally to get it to Johnny," Hyman pointed out.

Nylander feels the chemistry is building with Galchenyuk. The pair actually ran into each other by chance when Galchenyuk was in the middle of a stint in the American Hockey League.

"I was out for a walk and we were talking for an hour," Nylander revealed. "I had never really met the guy. Very nice guy. Obviously, wants to be here and works really hard out there. He's been great his first two games."

Galchenyuk's emergence made Jimmy Vesey and Travis Boyd expendable. The Leafs lost both forwards on waivers to the Vancouver Canucks in the last week.

"You don't want to lose these guys," Keefe acknowledged. "The system is what it is and the salary cap is what it is. You have to manage that well. We added a piece like Galchenyuk, who has the flexibility to move on and off of the roster. We were trying to create similar situations, with Simmonds coming back healthy, with Vesey and Boyd. It is what it is. It gives players like them opportunities to go to teams that have needs. In this case, Vancouver has been dealing with lots of injuries there. These guys will go there and get a good chance."

Boyd posted eight points in 20 games with the Leafs, but was bumped from the lineup when Simmonds returned from a broken wrist on Friday.

“He has played well here in the opportunities he was given," Keefe said. "We would've liked to have kept him — and certainly, the depth is nice to have — but we feel like we have lots of other guys. We mentioned Galchenyuk, but there are a number of others that are on the taxi squad or with the Marlies that we feel good about too."

Frederik Andersen missed practice on Monday and is also expected to be absent on Tuesday as he deals with a nagging lower-body injury.

"It is the same thing he missed time for previously. Nothing new," said Keefe. "I don't have any real update on him other than to say he is day-to-day."

Andersen missed four games in late February and early March due to the injury. He won five of seven starts before getting hurt and has dropped five of seven decisions since returning. He wasn't available to dress on Saturday.

Campbell, who returned from a leg injury on Saturday, has never started more than 26 games in any NHL season. What sort of adjustment is he facing if he plays more moving forward?

"It is not a huge one given that, through most of their lives, they are used to playing a lot," said Keefe. "But when it comes to this level, and you are not used to playing or haven't played as much, it is different in terms of how you manage it mentally and physically. Add in the fact that he has been a guy who has been fighting injuries this season and that is a whole other side of it. We have to manage that well. Giving him an additional day off of the ice today is part of that."

Campbell was held off the ice on Monday to get some extra rest, but after Saturday's game the 29-year-old made it clear he was feeling fine.

"I felt really confident coming in," he said. "I've done a good job preparing and a lot of that is [goalie coach] Stevie Briere, talking with Fred and Hutch [Michael Hutchinson] gets me ready, picking their brains to stay sharp."

Campbell initially hurt his leg on Jan. 24 in Calgary. He aggravated the issue in his return to the lineup on Feb. 27 in Edmonton. He's only started four games, but been excellent this season allowing just four goals.

During a question-and-answer session with Aeroplan members on Sunday, Keefe pointed out that the Leafs prioritized improving the team's spirit during the off-season leading to the addition of veterans like Joe Thornton, Simmonds and Zach Bogosian.

"I wholeheartedly believe the best teams are the ones where the players really do embody the things you want to be about as an organization," Keefe said. "That's why we felt we needed to grow and get more leaders and have, essentially, a team of leaders rather than relying on a small group of individuals to be that. I think the spirit of the team is so important when we're in a draft and salary cap system in the NHL and the parity in the league is so tight and it's so competitive. The spirit of the team really does make a difference and that's an area where we really wanted to grow in and I've been really encouraged with what we've had."

Marner and Matthews, the team's leaders in ice time among forwards, also stayed off the ice on Monday. But Marner still made an impact arranging for lunch to be delivered from The Burger's Priest.

"They were great," Nylander said of the burgers. "Thanks to Mitchy. Shout out to Mitchy for getting those for us."

The team held a skills practice on Monday with forwards on one pad and defencemen on the other working alongside coaches and the development staff.

"Get the feet moving, get some puck touches," said Engvall of the focus. "We practised cutbacks today so that's a thing to get better at.

Toronto is in the middle of the quietest part of their schedule with two games in a 10-day period. They had four days between games last week and will experience that same four-day break leading into Thursday's game in Ottawa.

Players on the ice at the Leafs skills practice: