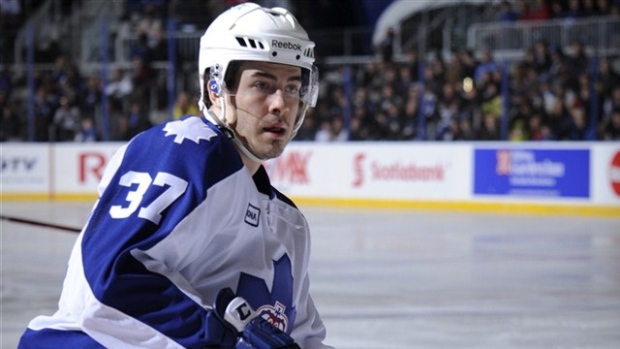 Ross, a 22-year-old native of Lethbridge, Alta., was drafted by the Toronto Maple Leafs in the second round (No. 43 overall) of the 2010 NHL Entry Draft. He's in his third season with the Leafs' AHL affiliate.

"The Toronto Maple Leafs organization supports the AHL Substance Abuse Program and today's decision to suspend forward Brad Ross," Maple Leafs general manager David Nonis said in a statement. "Our organization is diligent in its work to only provide our athletes supplements approved by the Banned Substance Control Group, and we've stressed the importance of staying within these parameters to maintain the integrity of what goes into their bodies.

"We are disappointed with Brad and fully support today's suspension."

The AHL did not reveal any other details in a short release Wednesday afternoon and a message left with the Marlies was not immediately returned.

Ross later issued a statement on the PHPA website.

“I truly want to apologize to the entire Toronto Maple Leafs organization, my teammates, friends, family, and fans for violating the terms of the AHL/PHPA Performance Enhancing Substances Program," he said. "I should have been fully mindful of anything entering my body and I understand the consequences for what has occurred. However, I did not at any time intentionally attempt to enhance my performance.

"All I can do now is learn from this and help educate other players to avoid making the same mistake I made. I look forward to putting this behind me and getting back to playing the game I love.”

Ross will be eligible to return to the lineup March 8. The six-foot-one, 183-pound forward has seven points (four goals, three assists) and 40 penalty minutes in 21 AHL games this season.