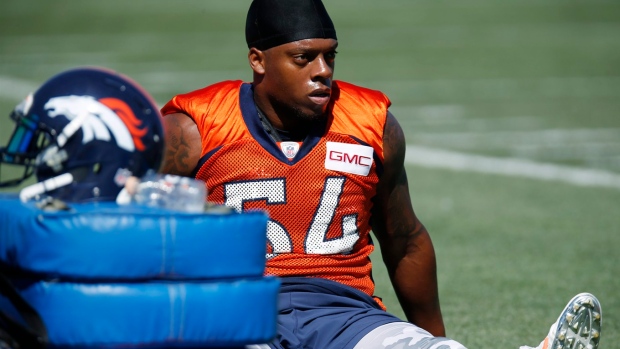 ENGLEWOOD, Colo. - Brandon Marshall is back on the football field, trying to replicate last year's breakout season despite two screws in his right foot and a heavy heart.

Marshall led the Broncos with 111 tackles last year despite being hobbled down the stretch by a right foot injury that required off-season surgery.

Because he didn't have the operation until March, he'll have to play the whole season before surgeons can remove hardware in his right foot, meaning he'll have to manage some pain along the way.

He said his foot feels fine so far, but the pain he's dealing with now is the grief over his grandfather's death.

"He had an uncle named Big," Marshall said, "so they named him Little."

Marshall's mother, Barbara, is the youngest of a dozen children: "My mom, she's a daddy's girl, so we were always at his house," Marshall said. "He was just like a father to me."

After attending the funeral, Marshall retreated to Miami, where he got a tattoo on his left pectoral in honour of his grandfather, who was a carpenter.

It depicts a hammer and nails, one of them "piercing" his chest and drawing a trickle of "blood."

"He's on my chest," Marshall said.

Marshall's off-season was cut short because the Broncos wanted him and fellow inside linebacker Danny Trevathan (left kneecap) to report with the rookies Monday instead of with the veterans on Thursday.

"At first I didn't want to come in early but it honestly helped me," said Marshall, who missed all of the team's off-season field work.

Trevathan, the Broncos' top tackler in 2013, worked his way onto the field in June but spent most of the off-season practices with Marshall on the sideline.

The middle linebackers are the fulcrum of Wade Philips' 3-4 defensive scheme, and there's major questions surrounding Marshall and Trevathan as they return from their injuries.

Not in their minds, though.

Trevathan said he and Marshall worked diligently all off-season in the classroom, weight room and training room.

"We've been smart and taking care of each other. That's going to help us be one of the best duos in the league."

Safety T.J. Ward said he's glad to see Marshall and Trevathan back on the field, even if it's just cameos.

"Man, a tremendous boost just seeing them out there," Trevathan said. "They're not going full-speed, doing everything we're doing right now. But walkthroughs and 7-on-7s, just having them two down there has been great. Just seeing them down there is kind of another level of comfort."

Anguish or not, Marshall plans to approach this summer's camp with the same dogged determination that helped him have a breakout season last year after bouncing around the practice squads in Jacksonville and Denver.