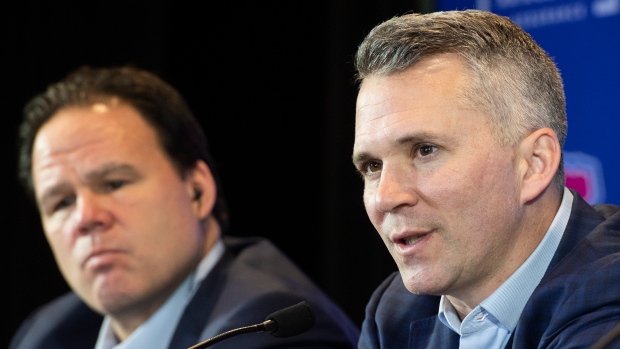 BROSSARD, Que. — Martin St. Louis built a Hockey Hall of Fame playing career from proving everybody wrong. As the new Montreal Canadiens interim head coach, St. Louis is back home to do just that all over again.

In his introductory press conference Thursday morning, the Stanley Cup champion admitted that becoming a head coach was something he was preparing for a decade. Used to being the underdog, St. Louis is fine with his first shot being in the middle of the season with a team bound to finish in the depths of the NHL.

“It was always a dream of mine to be an NHL head coach,” St. Louis said. “I knew I was going to do it, it was a matter of time. When Kent approached me, I had no doubt that it was a great opportunity and that the time was now.

“The terms or the contract didn’t bother me, it was about the opportunity. That’s all I was looking for. I don’t need promises, just give me a chance and I’ll show you what I can do.”

St. Louis’ coaching history is sparse. His only NHL experience outside of playing was a special teams consulting position with the Columbus Blue Jackets in 2018-19. Behind the bench, St. Louis was head coach of the Mid Fairfield Rangers U13 AAA in Connecticut.

“I’m not coming in as a substitute teacher,” St. Louis said. “I’m coming here to show my work and we’ll see what happens this summer, but my intention is to stay here for a long time. But I’ll need to show and prove it.”

St. Louis will jump in the action straight away by leading his new team on Thursday night at the Bell Centre against the Washington Capitals. While he admits that he can’t instill a philosophy in one afternoon, St. Louis said that he wants his team to work on their play both with and, most importantly, without the puck.

General manager Kent Hughes knew St. Louis back when he was playing for the University of Vermont. For Hughes, St. Louis “represents the culture” he and vice president of hockey operations Jeff Gorton want to establish in Montreal.

“I worked for a law firm that represented some hockey players and I went to the lawyer/agent and said we want to recruit this kid as a freshman at UVM,” Hughes said. “He said he'll never play in the NHL and I told him: ‘I know this kid will play in the NHL.’”

“A lot of people bet against him. I, for one, have chosen to bet on him, not against him. And I'm pretty sure he'll make the doubters revisit.”

A year ago to the day, Dominique Ducharme was behind the Habs bench for a 4-2 loss at home to the Toronto Maple Leafs but still an assistant under head coach Claude Julien. Ducharme would be named interim head coach on Feb. 24. A year later, St. Louis was announced as Ducharme’s replacement.

In his introductory press conference, Gorton said that Ducharme’s job was safe until the end of the 2021-22 season. However, the front office changed their minds following the seven-game losing skid the club’s been mired in since Jan. 20.

“You know, we had decided recently that Dom wasn't going to be here for next year and we just felt like, now was the time. If we're going to let them go after the season. Why not do it now and take advantage of this opportunity, these 37 games.”