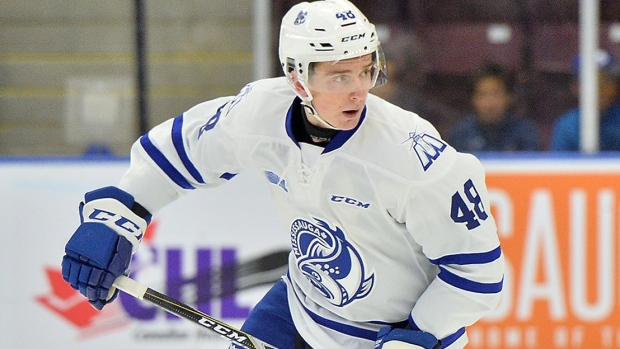 Mississauga Steelheads defenceman Thomas Harley has a lot of time on his hands as he prepares for Hockey Canada's World Junior selection camp.

"I'm quarantining with [Mississauga assistant] coach Jeff Kyrzakos, who's been nice enough to let me stay at his house for a couple weeks," said Harley, who lives in Syracuse, N.Y. "It's kind of challenging, honestly, how much time I have to kill. My parents got me the Game of Thrones books, so I'm three books into those and I fee​l like I've watched almost every show on Netflix that's worth watching."

​The son of Edmonton-born parents, Harley is a dual citizen who wears the Maple Leaf internationally. He's one of 47 players invited to the Team Canada selection camp, which opens on Nov. 16 in Red Deer, Alta.

The 19-year-old is considered a favourite to not only crack the roster, but play a prominent role for Team Canada inside the Edmonton bubble. After all, he's already got experience inside an Edmonton bubble, having made the Stars playoff roster. In fact, Harley, Dallas' first-round pick in the 2019 draft, made his National Hockey League debut playing in a round-robin game against the Colorado Avalanche on Aug. 5.

During a Zoom interview this week, Harley used some of his free time to reflect on what he learned in the NHL, including insights gained from watching Miro Heiskanen, John Klingberg and Esa Lindell up close. He also outlined the role he hopes to play for Team Canada this holiday season.

How did a kid from Syracuse end up playing for Canada?

"I was raised as a Canadian. My parents were both born and raised in Edmonton. I grew up with a Canadian jersey. All my teammates were American, and I got a lot of flak showing up in a Team Canada hat when they would beat the U.S. So, I grew up Canadian and it was always the right option for me."

What was your takeaway from the Hockey Canada selection camp experience last year where you were among the final cuts?

"One, the U Sports players are better than I thought they would be. They were a good team and they worked together well. Also, I have to play my game. I tried to fit into more of a safe role, that third-pairing-D role, and just go out there and move the puck up and not do much else and that's not how I play the game. It's not why I was invited to the camp in the first place. So, this year I know that a bit better and I'm ready to go and show what I can do."

What can you bring to this year's Team Canada? What role do you see for yourself?

"I think I'll be a top-four defenceman. I skate pretty well, so I'll be able to move pucks up to forwards,​ get up in the rush and play some solid D and try and shut down top guys."

What stood out about being in the NHL bubble?

"Just how close we got as a team. We went in there after a month in Dallas for training camp. I never really talked to the NHL guys, the top guys, before. Like, I never really talked to [Tyler] Seguin or to [Jamie] Benn. I talked to [Ben] Bishop a bit, but I never had a whole conversation with those guys and then you go to the bubble and there's nothing else to do but talk to these guys. You're with them all day. You're playing cards with them. You're celebrating with them after a series win, after just a regular win, so you get to know them real well and that was one thing that stood out to me. I think the same thing is going to happen to our team at the World Juniors if I end up going. We're going to be a really close team."

Did you have any conversations that stood out more than others?

"I was sitting at a table one night at dinner with Corey Perry and Jamie Benn and I kind of looked around the table and was like, 'That guy's won a Hart and an Art Ross, that guy won an Art Ross, they've made about $60-million, how am I here right now?' I just sat down and ate my food and was like, 'I'm not sure how much I have to contribute to this conversation right now.' I just kind of listened to what was going on and tried to soak it all in."

What will you remember most about your first NHL game?

"How hard it is. It's impossible to describe until you play in it. I thought I was a little more ready than I was. I go out there and I thought I had [Matt] Calvert beat on this one play. We were regrouping the puck and I stepped past him skating up the ice and he dives flat on the ice, swings his stick and knocks it off. I was like, 'You were 10 feet behind me and then I turn the puck over at the blueline.' I'm like, 'Alright, I'm just going to sit down on the bench and not even look at the D coach right now.' We played Colorado and [Nathan] MacKinnon is incredible. He dominates the play every time he's on the ice. [Mikko] Rantanen is somehow bigger than you think. He's 6-5, 220 and he's just an absolute freak of nature out there. But, that's where I want to be. That was the most fun I've had playing hockey, so will try and get back there."

Looking at the time-on-ice stats, you were on with MacKinnon for like 50 seconds.

What did you do well in that sequence?

"I don't know. I guess I had a good gap, watched the chest, you know, did all the things your parents teach you when you're six years old."

So, you got a sense of how hard it is, where do you have to get better to take the next step?

"My defensive game. These guys are so strong and so fast and being able to play defence is one of the hardest things, so it's just learning that role and learning all the things I have to do. By just playing against the other aces in the bubble I got way better, so I can just imagine how much better I'll get playing against the top guys. So, hopefully I can do that in training camp and show well enough that I can stick up there for a couple of games and maybe the whole year."

What stands out watching Heiskanen up close?

"He's an incredible skater. Every time he's on the ice Dallas is in control, because they're not racing around the D-zone or they have the puck. I think [head coach Rick] Bowness said he's the team's 'fixer' and I think that's the best way to explain it. Like, each time he's out there he either has the puck or is moving the puck to the forwards and they're in control of the game. It's incredible what he can do."

"He plays a little different game, but he's just as important to the team. He runs the power play so well. He can walk the blueline forever and draw guys and dump it off or shoot through traffic. I think he was so instrumental in how far we got in that run. He stepped up his defensive game, too. He's not the biggest guy. You look at him without [equipment] on and it looks like he's about 160 pounds soaking wet, but I remember against Vegas he went into the corner against Reilly Smith and sent him flying. He was definitely a big part in why we went as far as we did."

Another angle of the Klingberg hit on Smith #GoStars pic.twitter.com/UflxzRIbUy

And what about Lindell? He can be a bit underrated.

"He is. Before I got drafted I had no idea who he was and now I talk about him. I remember talking with the aces about his contract [six years, $5.8-million AAV] because he signed a new one [in May] and he deserves every single penny of that contract. He is so good defensively. I mean, you have MacKinnon coming down on him and then you got Mark Stone and he shuts them all down. It's incredible."

Can you pick up things about how he plays defensively?

"Definitely. We would sometimes go out and skate with the big group and they'd be doing two-on-ones and I'd just be watching him and seeing what he's doing. I don't think I saw him get beat by one two-on-one in practice and that's incredibly hard to do – especially against guys like Benn and Seguin and [Alexander] Radulov and Perry. I went against Perry twice and he got me on the same move twice. He was on his forehand, faked it, pulled it to his backhand and put it across and scored on me twice and I'm sitting there being like ‘How?' But Lindell stops it every time and it’s incredible."

Did you know it was coming the second time?