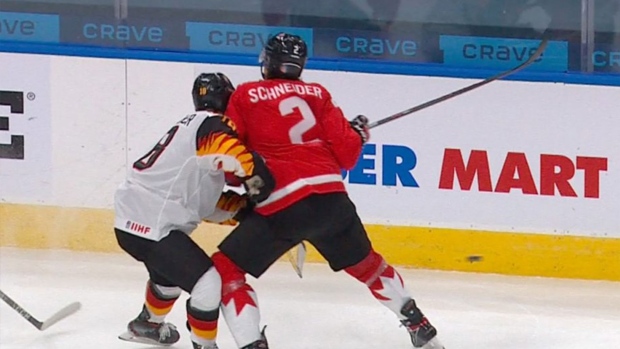 Braden Schneider played just four shifts on Boxing Day before being ejected for a hit to the head on German forward ​Jan-Luca Schumacher. The Brandon Wheat Kings defenceman was suspended one game and missed Sunday's win over Slovakia.

"I wasn't, honestly, too surprised," he said. "I know with the IIHF they take head shots very seriously, as they should, and I was kind of expecting one and I think I got what I ​deserved."

Hitting is part of Schneider's DNA as a hockey player. He studied Scott Stevens bodychecks on YouTube as a kid and views Shea Weber as his National Hockey League role model. But the Rangers' first-rounder admits he needs to recalibrate his physical play to avoid further issues at the World Juniors.

"I caught him a little higher than I would have liked," Schneider explained. "I wasn't meaning to do that by any means ... You got to go and calculate it a little bit better. I could have done some things different. I could have led with my stick and made sure I got all the guy, but it happens and it's a quick game so you're bound to make a couple mistakes."

The IIHF Disciplinary Panel has issued a one-game suspension to Team Canada defenceman Braden Schneider, for a violation of IIHF Official Rule 124-Checking to the Head and Neck Area: https://t.co/kGXNz1oU9z pic.twitter.com/epa2Bfc1vm

Schneider was playing in only his second real game since March and getting the timing down on hits is tricky, especially when there's a significant size difference. Schneider is 6-foot-2 and Schumacher​ is listed at 5-foot-9.

"It was a matter of size in that situation," said head coach Andre Tourigny. "I respect the decision, but at the same time I think it's a hockey play and I don't want him to change his style."

Schneider was back in his regular spot opposite Thomas Harley at Monday's practice.

Despite his big-hitting nature, Schneider has avoided supplemental discipline during most of his Western Hockey League career with only one suspension, one game for kneeing in November 2019, on his record.

"I'm still going to play the game I like to play," Schneider said. "I play with an edge. I'm hard to play against. That's part of my identity and that's why I made this team. I'll be a little bit smarter and pick my places a little bit better, but I'm not going to change my identity as a player."

Schneider isn't the only Canadian defenceman looking for a big hit. Bowen Byram laid out Slovakia's Jakub Kolenic at Canada's defensive blue line in the second period of Sunday's game.

"He's a smart player and a strong guy and when he can make those reads I love seeing a nice hit like that," observed Schneider. "He's a guy who can do it all and to see him bringing that physical element along with what he can do with the puck is pretty good to see."

"Strength is definitely a big thing," said Byram. "From last year to this year I definitely feel a big difference so it's a lot easier to feel confident making those plays when you feel strong and good on your skates."

Byram with a BIG hit 😬 pic.twitter.com/IkpB1NyEZA

Byram has focused on improving his defensive game and notes that spending time in the NHL bubble this summer and skating with Colorado's elite forwards helped him become more well-rounded.

"You learn pretty quickly how to try and defend those guys," he said. "You don't like to get burnt so you try and figure it out as best you can and I feel like being physical is a way to do that."

"Everyone talks about Bowen Byram as an offensive defenceman, but he's way more than that," said Tourigny. "He's a good defender. He's good to play physical. He's strong on the puck. He's strong in his battles, can play against any type of player and, for sure, his skating ability is still on top of the list."

Canada'​s power play failed to convert on two opportunities against the Slovaks and remains "a work in progress," according to Byram, who quarterbacks the top unit.

"Whenever you're together with a new group of guys it takes some time so we're working hard on it," Byram said. "It's definitely a big challenge for us tonight."

The first unit features a couple of guys in unfamiliar positions. Peyton Krebs, who scored a buzzer-beater on the power play against Germany, had never played the bumper spot before joining Team Canada. He's been studying video of Patrice Bergeron and Brayden Point in the lead up to the event.

Cozens has moved to the net-front spot since Kirby Dach got hurt. He also played there at last year's World Juniors, but not in the WHL.

"I learned to like that spot a lot so I'm definitely very comfortable in front," Cozens said. "I think my big body helps in positioning myself to screen the goalie and we have smart guys on the flanks [Cole Perfetti and Connor McMichael] and Krebsie in the middle who I can switch with and make plays with."

Canada went 0/3 on the man advantage in the pre-tournament game against the Russians, but did strike twice in that shellacking of the Germans on Saturday.

"It's tough to assess it, to be honest," said Tourigny. "We had the game against the Germans, I don't know what to think about that one and against the Slovaks, the first power play was no good. The second power play was really good. We didn't connect but we moved the puck well and had good chances. After the first power play, we saw a certain level of frustration. After the second power play, we felt better about ourselves. That's the sample we have so far so it's tough to have a good read on it. We want a little more consistency. We don't want the same start we had last game. It's too early to know exactly what we got."

Team Canada is honouring the victims of the 2018 Humboldt Broncos bus crash by placing a quilt featuring the team’s logo and colours in the stands behind their bench in Edmonton.

"I played with a lot of guys on that team so it means a lot that they're still being thought of and we're supporting them," said Schneider, who is one of three Saskatchewan-born players on Team Canada. "The hockey community is so awesome that way. We're so tight-knit and it puts a smile on my face and gives me shivers seeing that."

Our hearts will forever be #HumboldtStrong. Woven into the fabric of Canadian hockey. 💚💛#WorldJuniors pic.twitter.com/vG8yn3FgbD

During an interview with TSN during the pandemic pause, Team Canada forward Connor Zary, who is from Saskatoon, said the Humboldt victims are always in his mind when he takes the ice.

"I knew a few of those guys on the bus," said Zary, a centre with the Kamloops Blazers. "I played with a couple of them. I played against a couple of them. It’s difficult to see how in a blink of an eye everything is taken ... You keep those guys in the back of your mind every time you play or get that opportunity they didn't have to continue."