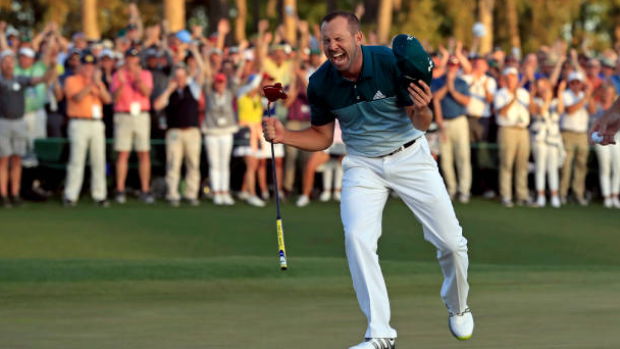 Sergio Garcia had played in 73 major championships when he arrived at Augusta National for the 2017 Masters. He’d finished in the top 10 a remarkable 22 times and was near the top of every best-player-never-to-win-a-major list.

His relationship with majors was a strange one. In just his second major as a professional, Garcia battled Tiger Woods in the 1999 PGA Championship at Medinah, made famous for his rambunctious running scissor kick on the 16th hole. He would eventually finish second.

There was a close call at the 2007 Open Championship at Carnoustie, where he went to the final round with a three-shot lead over Steve Stricker and six shots over the rest of the field. Needing a par on the final hole, Garcia missed an eight-foot putt that sent him to a four-hole playoff with Padraig Harrington, which the Irishman won.

Over the years, the emotional Garcia complained about getting bad breaks and even admitted that his game might not be built for major championships.

But in 2017, that turned around. Garcia seemed to have adopted a more relaxed, less intense approach on the golf course. He seemed at ease with his life, in part due to his engagement to Golf Channel reporter Angela Akins in January.

His new outlook transferred over to his golf game and he won the Omega Dubai Desert Classic after which he foreshadowed what was ahead, saying: "Hopefully it will be the beginning of a great year."

There were two big stories at the start of the week. The first was the weather in Augusta, with torrential rains forcing the cancellation of the Par 3 Contest.

The second came when Dustin Johnson, one of the pre-tournament favourites, slipped on some stairs and injured his back. He would withdraw the next day after trying to swing through the pain.

That was a stunning turn of events – one that caught our TSN team by surprise. And the first situation didn’t help us report the second one.

That rainstorm turned into a tornado warning and everyone was forced to leave the golf course, including media. Our team piled into our vans and raced back to our rented home, with almost all our television gear remaining back in the television compound.

When the news of Johnson’s injured back came out, we had to jimmy together a recording system using an iPhone and some table lamps from the house and one small lavalier microphone that James Duthie and I shared. (Little did we know that would be a precursor to almost how we operate daily in this current pandemic).

The opening round was played in exceptionally gusty conditions, with Charley Hoffman posting a 65 for a four-shot lead, that largest opening lead since 1955. A 75 on the second day dropped him into a four-way tie with Thomas Pieters, Rickie Fowler and Garcia.

A day later, Justin Rose birdied five of his final seven holes to catch Garcia for the lead and the two Ryder Cup teammates would head to Sunday as co-leaders.

There was a healthy big-name leaderboard for the final round with Rickie Fowler a shot back, and past champions Jordan Spieth and Charl Schwartzel within striking distance.

Still, for me, the best story was whether Garcia could finally break through. If he did, that was a story. If he didn’t, and lost in a close call, that was also a story.

As Garcia came to the 18th hole, he was tied with Rose. Both players reached the fairway, and both hit the green. Rose burned the edge with his birdie putt leaving Garcia in a familiar spot – a putt to win a major. It was reminiscent of Carnoustie in 2007, especially when he pushed the five-footer off to the right.

Unlike his playoff at the Open, this was sudden death and when Rose hit his tee shot into the pine straw where he was blocked out by a tree, Garcia had the advantage.

This time, he wouldn’t miss the opportunity. He rolled in a 12-footer for birdie and his first major title.

Over his career, Garcia has been a polarizing figure. Some fans love him, others not so much. Even through his tantrums, I’ve always regarded him as a good person and an exceptionally talented player with a wonderful flair in his game.