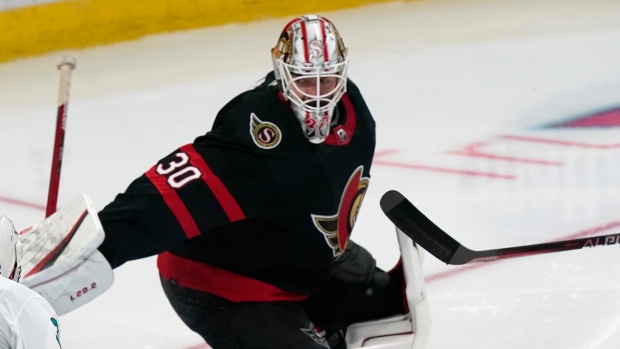 Ottawa Senators goaltender Matt Murray left Saturday's game against the New York Rangers in the third period with an injury and did not return.

After the Rangers goal, Anton Forsberg has replaced an injured Matt Murray in the #Sens goal.

Head coach DJ Smith did not have an update on Murray's status after the game.

Murray was injured on New York's first goal of the afternoon, causing Anton Forsberg to come in in relief. Forsberg then allowed two goals on three shots late in the third period as the Rangers stormed back to win 3-2.

Prior to his departure late in the third period, Murray had stopped 22 of 23 shots.

Murray made his season debut Thursday against the San Jose Sharks after missing the first several games of 2021-22 with an illness.

This is the 27-year-old's second season with the Sens after coming over in a deal with the Pittsburgh Penguins last October.