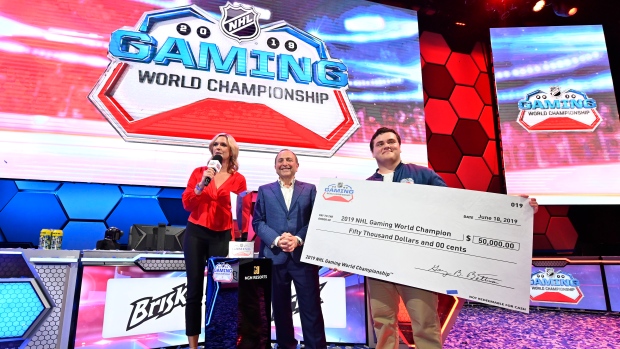 Gutkoski defeated fellow American John “JohnWaynee” Casagranda, who earned $15,000 for his finish, in a tightly contested best-of-three series, battling ahead to win the series in the final game with several third-period goals.

Caslib eventually finished in third place, taking home $10,000 from the final and $5,000 from winning the Canadian regional final. An EA NHL player by day and a casino dealer by night, Caslib burst onto the competitive EA NHL scene in 2019 after primarily playing casually with his friends in previous years. The Canadian regional was his first live esports tournament.

“Overall, [the Gaming World Championship was] an awesome experience and an exciting moment in my life,” Caslib said. “Representing Canada as the regional winner is truly an honour. It’s a bit disappointing to lose because the U.S. and Finland already claimed championships. This will surely motivate me to come back stronger to capture a win for Canada.”

Rather than playing with particular NHL teams, contestants selected their teams in a Hockey Ultimate Team-style fantasy draft before the regional and grand finals. Players then chose a team to represent on the ice. Gutkoski, for example, featured Alexander Ovechkin and hometown hero Zach Werenski while playing as his beloved Columbus Blue Jackets, while Caslib, from Vancouver, played as the Vancouver Canucks.

While the regional runners-up – Casgranda, Canada’s Matthew “YungGren” Grenier, and Finland’s Hannes “Hansulinho” Kettunen – all finished the round robin 1-1, Casagranda advanced to the semifinals on the strength of his 5-2 record in the regionals. There, he pulled off arguably the upset of the tournament by defeating 2018 champion Erik “Eki” Tammenpaa in a thrilling, three-game semifinal. In the third, deciding game, with Eki up one goal in the third period, Casagranda scored two goals in eight seconds with under one minute remaining to earn a trip to the all-American final.

Those nail-biting moments and elevated competition made for a very successful tournament. The NHL’s Twitch stream hit a peak of 68,896 concurrent viewers, with over 1.36 million unique views tuning in during the Vegas finals, per Twitch Tracker. The stream averaged over 43,000 views in total. The numbers represent a strong, impressive uptick from last year’s finals, which also took place in Vegas, which drew a peak of 27,572 concurrent viewers and had over 382,000 unique views.

The NHL has dedicated more resources to gaming and esports this season. Around the All-Star break, the league hosted a “House of Chel” in California, a mansion in which various NHL gamers and content creators lived and produced content for several days. The league added five new sponsors to the Gaming World Championship, while Honda and Scotiabank returned as sponsors: Adidas Hockey, ASTRO Gaming, Brisk, Great Clips, and MGM Resorts.

NHL teams, too, have gotten into the esports scene, with a number of teams hosting individual tournaments for smaller prize pools. Gutkoski began his run to the World Championship with a win at the Columbus tournament, while Casagranda took home title at events hosted by the Detroit Red Wings and Tampa Bay Lightning.

The NHL indicated after last year’s World Championship that it had its eye on moving to six-on-six esports competition in the long run. There’s no timetable, however, on potentially replicating the NBA’s team-based NBA 2K League, which features seasons of five-on-five competition.

For now, the Gaming World Championship is the glittering prize. Caslib, Casagranda, and all the other competitors will certainly be eager to return to the finals next year, whatever the prize pool and whatever the format. There’s a new champion in town that everyone wants to dethrone, and this year, it’s Matthew “Top-Shelf-Cookie” who has cemented his place on the top shelf.