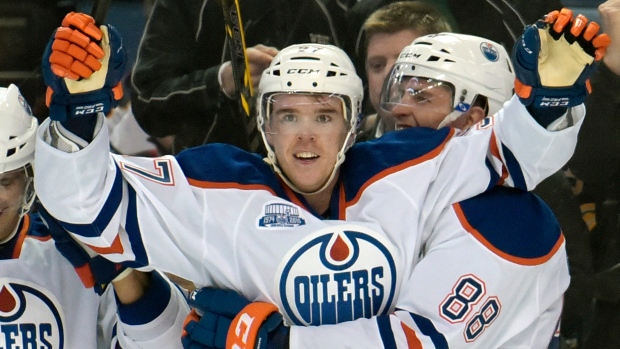 As a member of the Professional Hockey Writers' Association who gets to vote on a variety of NHL regular-season awards, there are a number of difficult questions that arise each year.

The questions tend to be a lot more straightforward than the answers.

For example: Should Drew Doughty or Erik Karlsson win the Norris Trophy as the NHL's best defenceman?

We've already been treated to multiple dissertations on that subject, as well as some spirited Twitter debate. There’s more to come, I'm sure, so we'll get to that in a bit.

But sometimes a basic question like that one or, who should win the Calder Trophy for the best performance by a rookie player, give way to a larger philosophical musings.

To wit, as I ponder the merits of Doughty vs. Karlsson, I first find myself asking another question: Should it matter that Karlsson's Ottawa Senators are not going to the Stanley Cup playoffs?

I was somewhat surprised recently to read that in the 61-year history of the Norris Trophy, the winner has never missed the playoffs.

When I heard that, I wasn't quite sure what to make of it.

The same would be true on another question, as it pertains to making my decision-making on the Calder Trophy voting.

That is, how many games should a skater have to play in order to win a major individual award such as the Hart, Norris or Calder? Or, how many games can a player miss before being effectively disqualified for a major award? Or, perhaps more precisely, I suppose, can Connor McDavid win the Calder Trophy playing just 45 of 82 games?

The short answer to any of these questions is any voter is free to do as he or she sees fit. Outside of some basic criteria in the specific description of each award, it's wide open.

When I'm pondering these things, and I do like to ponder almost as much as I like to use the word ponder, I often value the counsel and opinions of others, most of whom I'd say may be wiser than me. One of the benefits of this job is having access to a lot of a really smart and interesting hockey people who are happy to share their opinion.

So since I have questions, four of them actually, I've come up with a pretty spectacular expert hockey panel to help answer those questions and provide a little perspective that could help me, or others, at voting time.

For obvious reasons, my super savvy expert panel has to remain anonymous, but I can tell you that I ended up with 21 participants, roughly split into three groups — some NHL head coaches, some NHL general managers and some Hockey Hall of Famers. If you saw the names, trust me, you'd be impressed. I know I was.

So here are the four questions I put to them and a summation of how they collectively answered:

1. In your opinion, should a skater with less than 60 games played win a major individual award (Hart/Norris/Calder)?

The only information I supplied to the panellists was that since the 1966-67 season — the last year of the Original Six and the first season Bobby Orr played in the NHL — there has been only one occasion when a skater with less than 60 games won a major individual honour.

That was Orr in 1967-68, when in his second NHL season he won his first Norris Trophy as top defenceman on the strength of 46 games played in a 74-game regular season.

Sixteen of 21 respondents answered no, a skater should not be getting a major individual honour for less than 60 games played. Now, a handful of those 16 did want to qualify it a bit, suggesting that it can't be a hard-and-fast rule; that, if a player who dominated the league had played close to 60, well, exceptions could be made.

But generally speaking, the prevailing view was they would be hard pressed to vote for a Calder winner with less than 60 games unless there was some extraordinary circumstance.

Five of the 16 panellists answered yes, that they would have no problem whatsoever with a skater playing less than 60 games getting a major individual award.

Safe to conclude the majority of panel thinks the games played total matters.

It is interesting to note that in the last 19 years, excluding the three occasions a goalie won the Calder, 10 of the 16 skaters who were named rookie of the year played in all 82 games in their freshman season.

In fact, the most number of games a rookie winner missed in any Calder year since the advent of the 82-game season in 1996 is four. Evgeny Malkin played in 78 of 82 in 2006-07; no one else (Sergei Samsonov, Chris Drury, Alexander Ovechkin and Aaron Ekblad) missed more than one or two games.

2. Which of Philadelphia's Shayne Gostisbehere, Edmonton's Connor McDavid or Chicago's Artemi Panarin would you choose as your Calder Trophy winner?

Panellists were instructed they could write in another rookie if they wanted someone other than the three listed.

Here's a comparative look at the numbers they've put up this season:

Given the way respondents answered the first question on the importance of games played, perhaps it comes as no surprise McDavid received little support as the Calder winner.

“I'm sure we all believe if McDavid had played a full season, it would have been no contest,” one panellist said. “But he didn't. His numbers were tremendous for the games he did play but Panarin and Gostisbehere have been outstanding. Maybe if there weren't a viable option to McDavid, but there is.”

Many of those voting for Panarin readily acknowledged the perceived inequity of a 24-year-old with six seasons of experience in the KHL competing against a 19-year-old true, first-year pro.

“Those are the rules,” one voter said. “We can't ignore the rules. Panarin is a rookie. If it were really close between Panarin and another player, maybe you could use that criteria as a tiebreaker to give to younger player.”

As for the argument Panarin benefited from playing alongside Patrick Kane on a Cup contender, duly noted, but some of his supporters said it's not a fluke Kane had his best season with Panarin working alongside him.

“It's not McDavid's fault he played on a team that isn't as talented and doesn't play many meaningful games,” another panellist added, “but it's not Panarin's fault either.”

As for supporters of The Ghost, one said it's obvious to him which rookie player had the greatest impact on his team this season: "Do you think Philadelphia is competing for a playoff spot right now if not for [Gostisbehere]?"

3. Should playing on a non-playoff team disqualify a defenseman from winning the Norris Trophy?

While the majority of the blue-ribbon panel said a non-playoff year shouldn't preclude Norris consideration, many of the 13 respondents did say it could and should be some factor in their voting, and that it would have to be taken on a case-by-case basis.

It is worth pointing out that many Doughty supporters will cite this as a reason why the Kings' defenceman is a better choice this season than Ottawa's Karlsson, though it must be noted that in voting last year, even though Karlsson won the Norris, Doughty had more first-place votes in a season in which the Kings didn't make the playoffs.

And while the majority answered no to this question, it was by no means overwhelming. Eight of those voted yes, playoffs matter, and were adamant that to win a major award the player needs to lead his team to the playoffs.

4. Who is your choice for the Norris Trophy: Drew Doughty or Erik Karlsson?

Panellists were told they‎ could write in any defenceman of their choice if they believed someone other than Doughty or Karlsson warranted the award.

‎It wasn't even close. A landslide.

Most of the Doughty fan club on this esteemed TSN Hockey panel espoused the commonly heard arguments we've seen in stories and on recent Twitter fights.

That is, as good as Karlsson is offensively, Doughty better embodies the definition of an all-around defenceman.

A sampling of some pro-Doughty comments:

“Doughty plays in a tight system and sacrifices points to win,” said one Hall of Famer.

“Karlsson is amazing but No. 2 for me,” said another.

One Doughty supporter went so far as to lightheartedly suggest — at least I think it was lighthearted — that anyone voting Karlsson for the Norris should lose their voting privileges.

While Karlsson only garnered two of 21 votes, if the identity of his small group of supporters could be revealed, there'd be no jokes about suspending voting privileges.

Even some of the Doughty boosters acknowledged the debate has gotten a little out of hand, perhaps a touch too emotional or polarizing.

“It's gotten to the point now ‎where if you say you support one guy over the other it's taken as a criticism of the other guy,” said an NHL coach. “They are both phenomenal talents. If I say Doughty, and I do, I'm not saying anything bad about Karlsson.”

One GM who voted for Doughty did acknowledge he's a little bit conflicted by his own support.

“Like a lot of people, I believe [Doughty] is due to win his first Norris Trophy, and I do believe that," he said. "But I am wondering about the timing now. Look at Karlsson's season; look at the numbers he's putting up. It's incredible, really. I do sense there's this sentiment to make sure [Doughty] finally gets recognition, but I am kind of wondering if, given what Karlsson has done, this may be exactly the wrong time to give it."

It was interesting that one Hall of Famer went with Pittsburgh Penguin defenceman Kris Letang. Others went out of their way to laud San Jose's Brent Burns, too, but no one could see their way clear to put Burns ahead of Doughty or Karlsson.