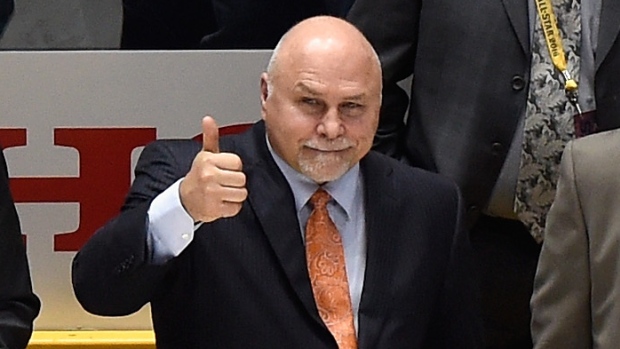 It's too soon to say how members of the NHL Broadcasters’ Association will officially vote on the Jack Adams Award (Coach of the Year) once the regular season ends on Sunday, but the NHL coaching fraternity has spoken.

And they've done so quite emphatically in favour of the Washington Capitals head coach, who led his team to the President's Trophy as the NHL's best in the regular season.

In a TSN Hockey almost-end-of-season NHL head coaches' poll, Trotz was No. 1 on 18 of the 27 ballots submitted during voting conducted Tuesday. Coaches were asked to provide their top three choices; Trotz's name appeared on 24 of 27 ballots.

Florida Panther head coach Gerard Gallant, who led his team to the Atlantic Division regular-season crown, was the runner-up to Trotz. Gallant received seven first-place votes and appeared on 22 of 27 ballots.

In all, 10 of the 30 coaches received at least one vote although only four - Trotz (18); Gallant (seven), Bruce Boudreau (one) of Anaheim; and Ken Hitchcock (one) of St. Louis — received a first-place vote.

That said, it was Lindy Ruff of the Dallas Stars who finished third in balloting. Ruff didn't get a first-place vote, but did appear on 10 of 27 ballots to ever so narrowly edge Boudreau, Hitchcock and Pittsburgh's Mike Sullivan for third place on the list.

The only other coaches to get a vote were Philadelphia' Dave Hakstol, who got two mentions, and Arizona's Dave Tippett, Carolina's Bill Peters and Chicago's Joel Quenneville, each of whom received one vote.

Here's how the final results looked using a 3-2-1 point system to tally the votes: