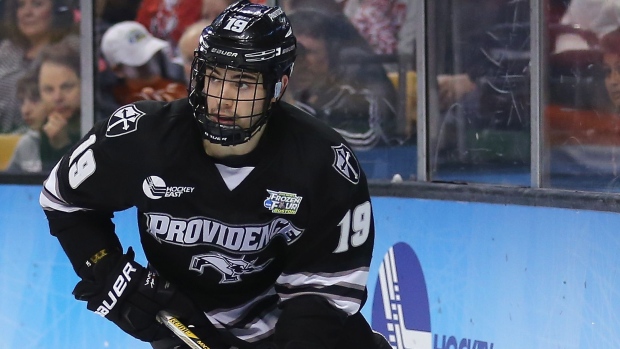 Let's call this the curious case of Jake Walman.

Walman is the 19-year-old, 2014 third-round pick of the St. Louis Blues. A defenceman with the Providence College Friars, he currently leads the all NCAA defencemen in scoring, with nine goals and 17 points in 11 games. The leading goal scorer in the NCAA, New Hampshire forward Andrew Poturalski, has 11.

Walman is Canadian-born and bred, a product of his hometown Greater Toronto Hockey League‎. But since his mother is an American, Walman has dual citizenship and holds both Canadian and American passports.

Last summer, Walman had a choice to make. In this, his final season of junior eligibility, would he attend the national junior team summer camp‎ of Team USA or Team Canada? He was believed to be eligible for both, courted by both USA Hockey and Hockey Canada.

He opted for Team USA - presumably because he thought his chances of making the American team were better and/or not many U.S. college products play for Team Canada.

He attended the U.S. summer camp in Lake Placid, N.Y., and was considered a strong candidate to make the American team. That was before he went on an early-season goal-scoring spree that has garnered national attention.

But here's where it gets interesting: Walman found out this week that he is not eligible to play for the U.S. Even though both USA Hockey and Walman believed in the summer he would be approved as an American by the International Ice Hockey Federation, that application was rejected by the IIHF.

Walman was apparently tripped up by an IIHF requirement. As a Canadian-born and Canadian-developed/trained hockey player, a U.S. passport alone is not enough for him to play for the Americans.

Walman was required to reside in the U.S. for 16 months. Apparently, he met that IIHF requirement.

But he must also be deemed by the IIHF to have played two consecutive seasons in the U.S. He's currently in the midst of his second consecutive season in Providence but that apparently wasn't good enough for the IIHF. The application was rejected.

Not surprisingly, USA Hockey didn't agree with the ruling. USA Hockey appealed but the IIHF ruled against the appeal. The word came down early this week.

The bottom line is Walman can't play for the Americans at this WJC.

He is, however, eligible to play for Team Canada. As a born and hockey-bred Canadian, he does not need to satisfy any residency requirements. In the eyes of the IIHF, he's as Canadian as Canadian can be.

So, does Hockey Canada get past the fact Walman chose the U.S. over Canada in the summer and invite him to the Canadian national junior team final selection camp, Dec. 10 in Toronto?

We'll find out officially on Tuesday, when Hockey Canada will announce the players invited to the final camp. The sense is Walman is more likely than not to be among the 10 or 11 defenceman invited to try out for the seven available positions. But a final decision has yet to be made.

It's ultimately up to the national junior management team of Scott Salmond, Tim Speltz and Ryan Jankowski, as well as head coach Dave Lowry, to make the final call on whether to include Walman. It's entirely at their discretion.

From a hockey perspective, Walman has an asset that‎ is in high demand — he is a strong-skating, puck-moving defenceman with a pro shot from the point that could make him a top trigger man on a top power-play unit.