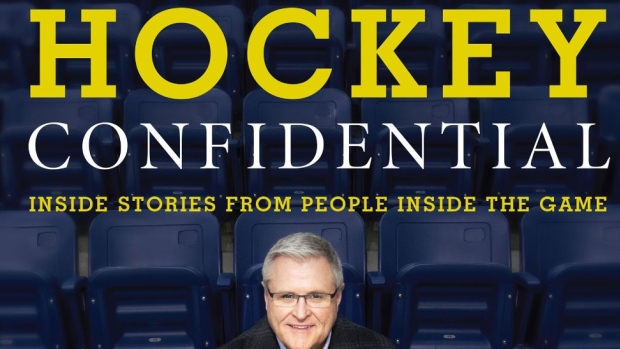 Shameless plug aside, my new book (Hockey Confidential: Insides Stories From People Inside The Game) comes out Oct. 14 and I can’t wait.

I mean, I literally can’t wait for it to be released, as in I feel the need to share one of my favorite stories from the book right now, as we near the 2014-15 NHL season opening.

The book is a collection of stories about hockey people – a well-known hockey executive reflecting on a near-death experience; an NHL fighter talking about what it’s really like to give and take punches; an NHL star talking about the essence of scoring goals; a teenage hockey phenom and his family explaining what it’s like to grow up “exceptional” in Canada; plus, multiple other stories of “hockey people” and their life journeys, much of it fused with some universal themes (life, death, family, giving) that transcend the game.

Chapter 4, though, is simply entitled #fancystats and there’s an item in it I’ve been sitting on since last April. It’s been killing me to not to share what I think is a really interesting, funny and revealing story, especially given the whole #fancystats revolution of this past summer.

The chapter is, more or less, an oral history of the advanced statistics movement. While I was writing the book last winter and spring, I set out to do what, at that point, had never been done before – interview the mythical Vic Ferrari, whose Irreverent Oiler Fans website was, between 2006 and 2008, effectively the cradle of #fancystats civilization, the birthplace of the hockey metrics Corsi, Fenwick and PDO.

And I did just that. Now, interviewing he (Vic Ferrari) who had not been interviewed before – I spoke to him on a phone interview for about 35 minutes on April 29 -- would have been a pretty big deal when the book came out if my esteemed colleague and good friend Elliotte Friedman had not subsequently done it in August and written about it on the CBC’s website on Aug. 6.

Not only did Elliotte interview Ferrari (about the explosion of advanced statistics this past summer), his excellent story unmasked Vic Ferrari to be Tim Barnes, a financial analyst who now lives in Chicago.

Thankfully, for me and my book, Vic or Tim or whatever you choose to call him didn’t reveal in August what he told me in April – the real story of how Corsi got its name.

Whether you’re pro-#fancystats or anti-#fancystats, that five-letter name – C-O-R-S-I – has become the single most talked about label in hockey over the past year. I think, by now, most everyone in hockey generally has an idea of what Corsi is: effectively a measurement of one team’s shots on goal + missed shots + shots taken but blocked by the other team compared to the other team’s (same formula) and expressed as a percentage. Corsi has proven to be a good proxy for puck possession, though the debate rages on how meaningful it may be beyond that.

Most everyone in the advanced stats community also thinks they know exactly how Corsi got its name.

Legend has it that Vic Ferrari heard long-time Buffalo Sabre goalie coach Jim Corsi on a radio interview talking about measuring a goalie’s workload by tallying up not only shots on goal but missed shots and blocked shots as well and then Ferrari went into his secret hockey nerd lair in Edmonton, crunched the numbers, sprinkled some magic dust and, poof, Corsi was born, named for the cerebral goalie coach and former math teacher who inspired it.

Ferrari told me it was actually then Buffalo Sabre general manager Darcy Regier he originally heard on the radio talking about shot attempts, not Jim Corsi. In fact, at that moment, when Ferrari was listening to Regier, he had never even heard of Jim Corsi.

Here’s what Ferrari told me in April:

“I was going to call (the new metric) the “Regier” number. But it didn’t sound good; it didn’t seem right. Then I was going to call it the “Ruff” number (after then Sabres’ coach Lindy Ruff), but that obviously sounded bad. So I went to the Buffalo Sabre website and looked at a picture of a guy on their website, and Jim Corsi kind of fit the bill. So I called it a “Corsi number” and then I pretended it was (Corsi) I heard on the radio talking about it – that’s what I told people. That’s basically (how Corsi got named).”

Wait a minute. Was Ferrari actually saying Corsi became Corsi because he liked the look of Jim Corsi’s picture, especially his moustache, on the Sabre website and the sound of his surname?

That’s exactly what Ferrari was saying.

“I always prepared myself (that if the stat became well known) – hey, it was just a small group of nerds talking hockey – that eventually (Jim) Corsi or someone would come to me and say, ‘What the hell are you guys talking about and why are you (using my name)?’” Corsi told me. “I figured if it happened, I would apologize and carry on.

“I was really surprised a few years ago when I read a story in USA Today where (Jim) Corsi talked about how the inspiration (for measuring shot attempts) came to him when he was skiing in the Alps, and I thought, ‘(expletive deleted), it came to me when I saw your picture on a website, because I liked your moustache.”

A good story gets even better, though.

Ferrari had no idea back then, or even during our interview in April (until I told him), that Jim Corsi was actually the individual responsible for measuring a goalie’s workload by counting shots on goal + missed shots + blocked shots and, therefore, Ferrari’s random naming of Corsi turned out to be oh so fortuitous, that Regier wouldn’t have been talking about it if not for Corsi.

“Oh, I had no idea of that,” Ferrari said. “I just liked his moustache.”

Seriously. You can’t make up this stuff.

I recounted this story to former Sabre GM Regier, who is now working as an assistant GM in Phoenix, and I feared he was going to drive off the road, he was laughing so hard.

“I always kidded Jim that he was the self-proclaimed protector of all goalies,” Regier said. “He was always looking for a stat that would give his goalies their due. (Adding up shots on goal, blocked shots and missed shots) was something along those lines. Jim was always charting shots – where they came from, that stuff. In all the years I’ve known him, Jim never tried to take credit for (the Corsi metric as it more sophisticatedly applied now). He was just interested in tracking shots for his goalies…I can assure you, if I was on the radio talking about that sort of (statistical) stuff, it would have come from Jim…”

If the story generated uproarious laughter from Regier, the laugh track was long and loud from Jim Corsi himself when he was told the story how “Corsi” actually got its name.

“Are you serious?” Corsi said, laughing. “That is so funny for that to come out after all these years. You actually talked to (Ferrari)? That’s amazing. I’ve always told people I was flattered he used my name but it was always sort of a mystery to me how it came about.”

As Regier said, and Corsi has always been quick to add, at no time ever did the genial goalie coach try to take credit for the metric as devised by Ferrari. He was just thinking a little outside the box in terms of doing his job at that time in his dealings his goaltenders and fellow coaches and management.

“That’s why Darcy and I get along as well we do,” said Corsi, who is in his first year as goalie coach of the St. Louis Blues after so many years in Buffalo with the Sabres. “Darcy has an analytical mind and so do I. So maybe (the naming of Corsi) was, what do they call it, serendipity? It’s funny to find out (how Ferrari actually came to use Corsi’s name) and it’s funny I was (trying to track shot attempts) and (Ferrari) didn’t even know that. Who could have imagined that? That’s hilarious.”

So there you have it – the real story of how Corsi got its name.

You may now resume loving or hating it, or just Keep Calm and Corsi On.