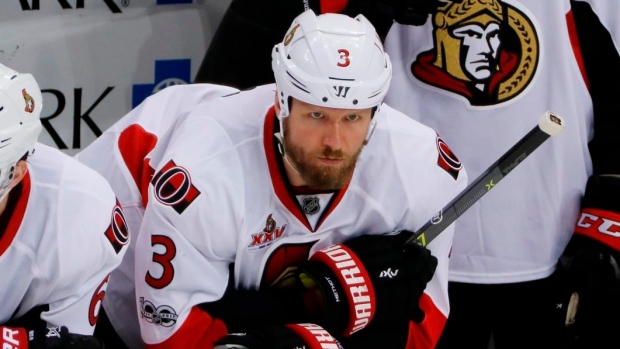 Marc Methot's stay with the Vegas Golden Knights lasted five days. Vegas traded the defenceman to the Dallas Stars on Monday In return for goalie Dylan Ferguson and a 2020 second-round pick.

Ferguson was selected in the seventh round (194th overall) on Friday by the Stars in the NHL Draft.

The 32-year-old Methot was selected by the Golden Knights last week in their expansion draft.

He spent five seasons with the Ottawa Senators, recording 14 goals and and 69 points in 304 games with the club.

"We are thrilled to have the opportunity to acquire a player of Marc's caliber," Stars GM Jim Nill said in a statement. "He has proven to be a capable and steady defenseman that can play well with an offensive-minded partner, and he will add a tremendous amount of leadership and experience to our blueline."

Methot has two years left on his current deal that expires at the end of the 2018-19 season at $4.9 million per year.