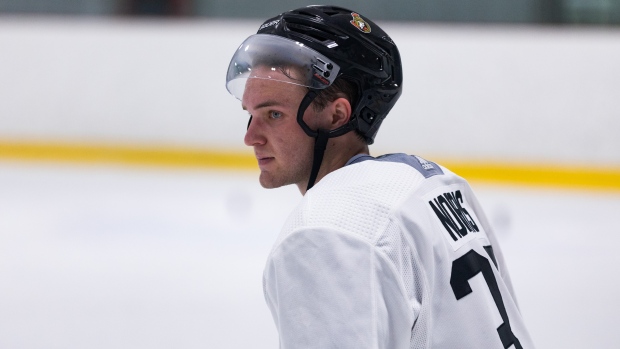 The school shooting in Michigan on Tuesday that left four students dead and injured seven people was emotional news for Josh Norris.

The Ottawa Senators centre attended Oxford High School in Oxford, Michigan and wore a patch honouring his hometown as he spoke with reporters after the team's game day skate on Wednesday.

"It was a tough day yesterday," he said, breaking down at times. "You never think something like that would happen is going to happen in your hometown, so I just want to send all my love, my thoughts with my hometown.

"Obviously, it's unfortunate. Like I said, it's hard. Just what some of those kids went through, the parents of those kids, it's really difficult. All I can do is send my thoughts and my love. I'm proud to be from there and it's such an unfortunate situation."

A 15-year-old sophomore opened fire at the Michigan high school, killing four students and injuring seven people. Investigators are trying to determine a motive for the shooting, located in a community of about 22,000 people, roughly 50 kilometres north of Detroit.

After graduating from Oxford, Norris later attended the University of Michigan to play hockey before being drafted by the San Jose Sharks in 2017.

Senators captain Brady Tkachuk said he was with Norris on Tuesday when he heard the news and said the whole team is there to support him.

“I’ve been to his house a couple of times, and we’ve driven by that high school before,” Tkachuk told reporters on Wednesday. “We’re thinking about everybody and I think it’s an important time to be there for Josh.”

Files from The Associated Press and CTV News were used for this report.